What’s there to see in the Guggenheim Museum Bilbao?

Designed by North-American architect Frank O. Gehry and inaugurated in 1997, the Guggenheim Museum Bilbao is one of the most important buildings of contemporary architecture. The monumental building has converted into one of the main landmarks of the city of Bilbao owing to its sculptural design, which makes the most of materials such as titanium and glass.

In addition to its original structure, the Guggenheim Museum Bilbao plays host to a complete programme of exhibitions. Its permanent collection includes works by artists such as Jeff Koons, Mark Rothko, Jean-Michel Basquiat and Miquel Barceló, amongst other figures, while the temporary exhibitions offer a wide perspective of 20th century art.

The history of the Guggenheim Museum Bilbao 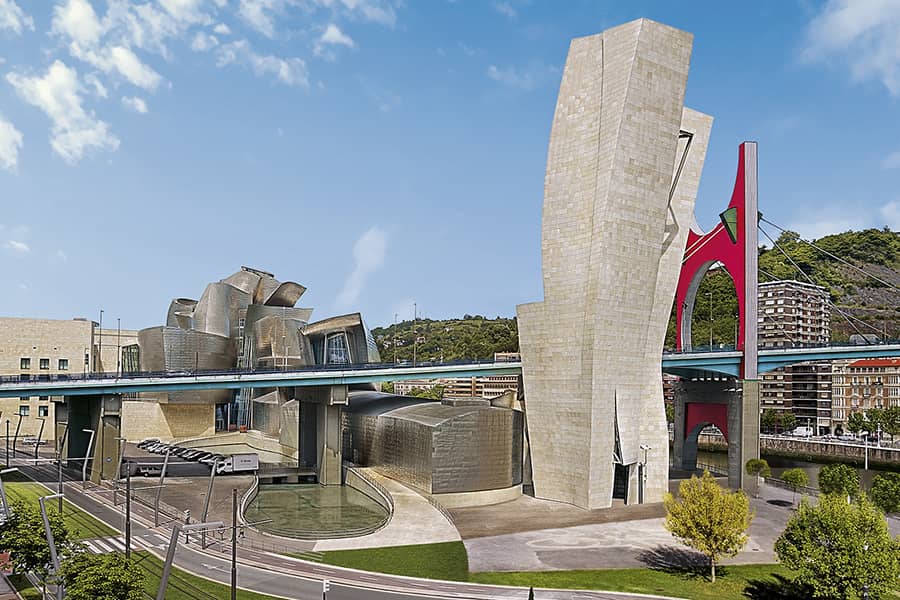 In February 1991, the Basque Administrations contacted the Guggenheim Foundation in order to propose collaborating on a contemporary art museum to boost the city of Bilbao and give the Basque Country the cultural equipment it so needed despite boasting artists as important as Eduardo Chillida and Jorge Oteiza, amongst others.

In April, on the occasion of the first visit to the Basque city by the Guggenheim Foundation’s director, Thomas Krens, (who wanted to expand the international scope of the Museum), the first meeting between the Basque Administrations and the Foundation took place to explore the scope and feasibility of the project and to analyse the different possible locations for the Museum, one of which included the Corn Exchange site (the Alhóndiga), which was originally a wine storehouse in the early twentieth century, in central Bilbao.

The choice of the estuary 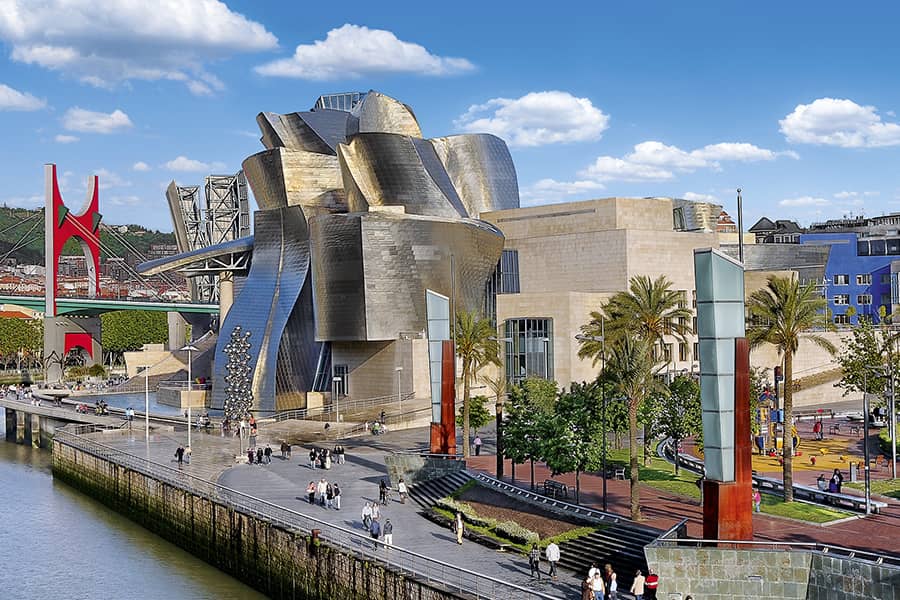 In May 1991, Frank Gehry went on his first trip to the City of Bilbao (contracted by the Guggenheim Foundation) as a consultant specialized in the transformation of industrial spaces into cultural centres. He was to study where the best place would be to put the future Museum.

After analysing various possible locations and taking into consideration the authorities’ insistence that the estuary zone be recuperated (a key area in the social and economic revitalization of the city), it was suggested that the Guggenheim Museum Bilbao be constructed on one of the sites next to the estuary that had been left abandoned due to the recent crisis.

The choice of the site delighted all those associated with the project, above all Gehry as it seemed “exciting” for its industrial past and for the development challenge that it proposed for the construction of the Guggenheim.

A museum of industrial and naval inspiration

From his very first visit to Bilbao, Frank O. Gehry immersed himself in the naval and industrial atmosphere that the city still conserved. Despite the fact that it was precisely his museum project that would play an important part in the manufacturing city’s new image, the architect nonetheless strove to incorporate the traditional atmosphere of the Basque city into his designs for the Guggenheim Bilbao.

He did so by providing the Museum with external forms that reminded of ships sailing down the estuary to the port and by using metal titanium in honour of the recent mining, iron and steel history of the region.

A façade for every context

Because the central atrium leads on to various wings of irregular shape, the Guggenheim Museum, whose entire exterior can be circumnavigated, takes on very different appearances depending where it is viewed from. Gehry focused on the urban context of each one of the façades, which were adapted according to their surroundings.

Moreover, he held back on the general tendency to use curved lines when planning the Guggenheim Museum’s south façade, the one overlooking the square and the Alameda de Mazarredo Boulevard, by adapting it to the orthogonal configuration of the surrounding properties.

However, he gave free rein to his imagination when designing the north façade, which overlooks the estuary and whose absence of buildings freed him from urban constraints. In this sector he echoed the sinuous forms of sailing vessels and fish, associated with the adjacent estuary.

The titanium cover of the Guggenheim Museum Bilbao 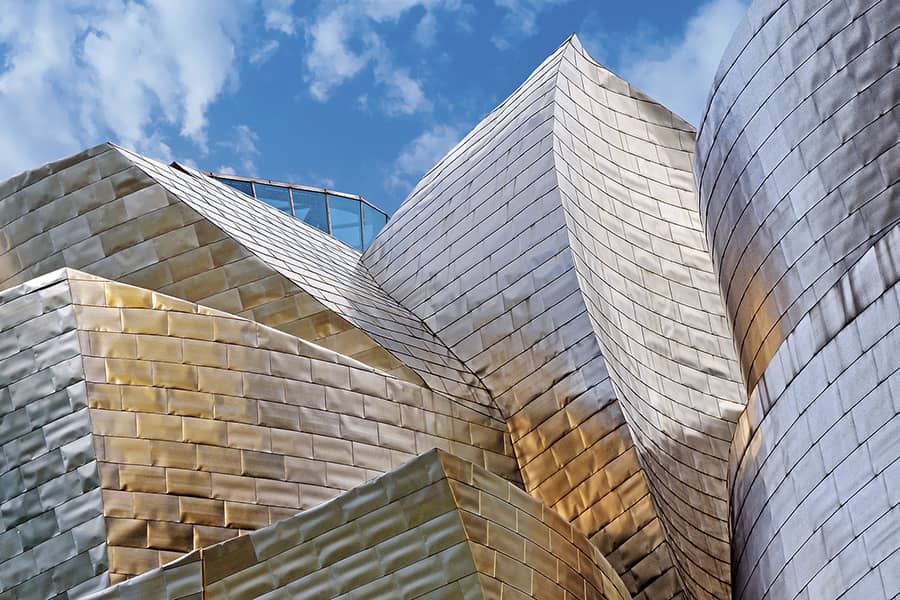 At first, Gehry studied the possibility of covering the Guggenheim Museum with leaded copper (rejected for being a toxic alloy) and with stainless steel, a material that he used in his previous project on the Weisman Museum of Minneapolis. However, Gehry noted that steel could be quite dull and lifeless on grey days, which were frequent in Bilbao, and that high humidity might corrode it.

Looking for alternatives, he focused on some samples of titanium that had arrived at his studio and realized that it is a metal whose sheen has a similar quality to that of silver and which shines even on a cloudy day. These visual properties, along with its very light weight, ductility and resistance to corrosion, compensated for its one disadvantage: its high cost. Finally, the minimum thickness of the panels chosen meant that titanium could be used without going over budget.

North American architect Frank O. Gehry devised a totally new type of museum, giving visitors the choice to design their own itinerary without preconceived proposals. With this objective in mind, he planned an atrium that directly connected with all exhibition areas, in such a way that after contemplating the works in a determined wing, the visitor had to go back through the atrium to get to another area of the Guggenheim Museum.

Spacially, this conception could be interpreted as an organic form of inspiration: a nexus (the atrium) from which various extremities of all different shapes and sizes unfold, such as the galleries. These, in consonance with Gehry’s deconstructivist philosophy, have two types of layout: orthogonal style (made from a base of straight walls) and irregular style, based on curved shapes.

The glass and natural light of the Guggenheim Museum 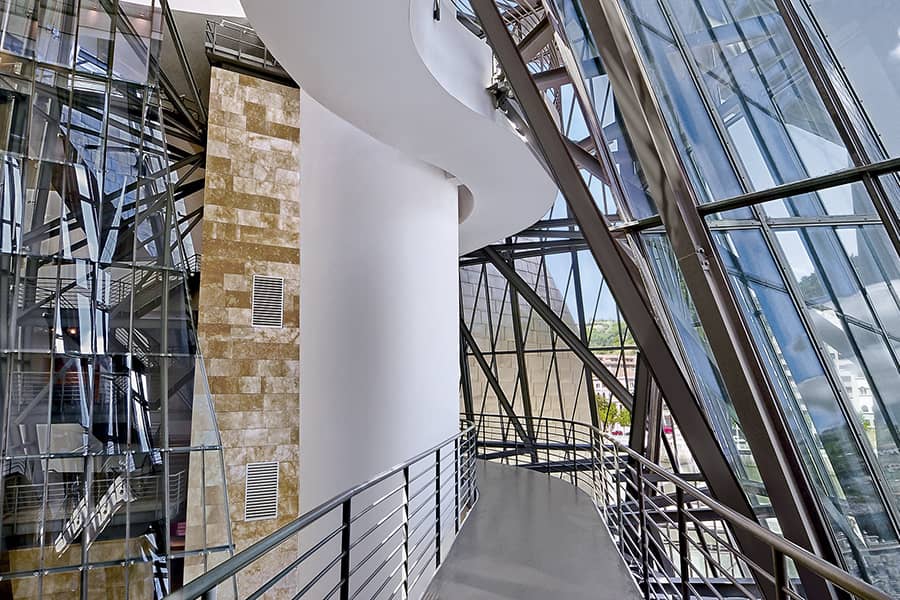 In order to avoid light reflecting on the works displayed, the architect did not include any windows in the Museum’s exhibition rooms, except in Room 103. It is for this reason that he decided to illuminate the galleries in a zenithal way by means of large skylights installed in the ceilings and large, metal, glazed structures in curtain wall style that are concentrated almost exclusively in the atrium and in the different entrances.

The glass employed was manufactured using a special treatment that incorporated metal particles in its composition in order to protect visitors from excessive heat and to preserve the works from solar radiation, very harmful for their conservation. If the sunniest areas of the building hadn’t been treated in this way then the Guggenheim Museum would have been like an enormous, very hot greenhouse.

A luxury book that unveils the Guggenheim

Icon of the city of Bilbao, the Guggenheim Museum was designed by the architect Frank O. Gehry. It is a building that changed the concept of modern architecture.