What is Santiago Cathedral?

Located in the Galician municipality of Santiago de Compostela, in the north-east of Spain, Santiago Cathedral is a Catholic temple designed in the Middle Ages to hold the remains of Santiago (James) the Apostle, one of Jesus Christ’s closest disciples.

Owing to its long drawn out history, the cathedral, one of the most important centres of pilgrimage in the world, combines elements typical of Romanesque art such as demonstrated in the Glory Portico, with Renaissance and Baroque details, which can be found on the striking Obradoiro Façade and the censer (the “Botafumeiro”), one of the most popular symbols of Santiago Cathedral.

The history of Santiago Cathedral 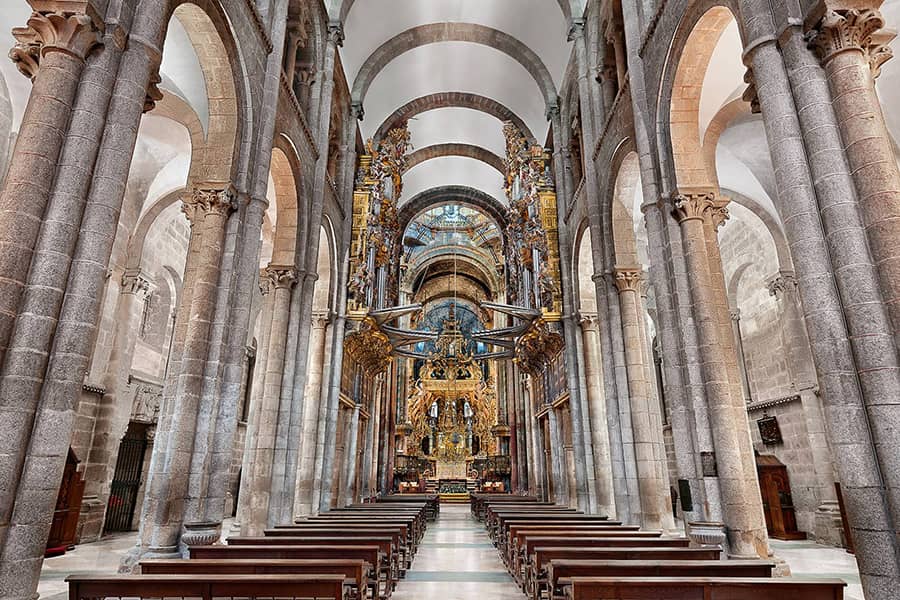 In the eighth century, most of the Iberian Peninsula was under Muslim rule, which, by means of conquests and treaties with Visigoth leaders, had woven a web of influence that went beyond the Pyrenees. Christian pockets of resistance to the invader were concentrated in the north of Spain, where the Kingdom of Asturias led a land annexation process that allowed it to extend its borders to the east and west.

Moreover, religion gave a symbolic meaning to the reconquest policy of the Asturian monarchs, who contributed to the development of an episcopal network. In the ninth century, from the bishopric of Iria Flavia (close to present day Santiago) came the news of the discovery of a mausoleum that held the remains of James the Greater, one of Jesus Christ’s apostles. A church was built to protect his relics, quickly replaced by a larger one that was able to respond to the early pilgrimages and underpin the cohesion of the territory.

However, the increasing enthusiasm for the Jacobean cult meant the design of the temple had to correspond with the importance of the relics, and by the year 1075 construction work began on Santiago Cathedral, an edifice that was inseparable from its surrounding urban structure and the infrastructures that connected the Iberian Peninsula with the rest of Europe. 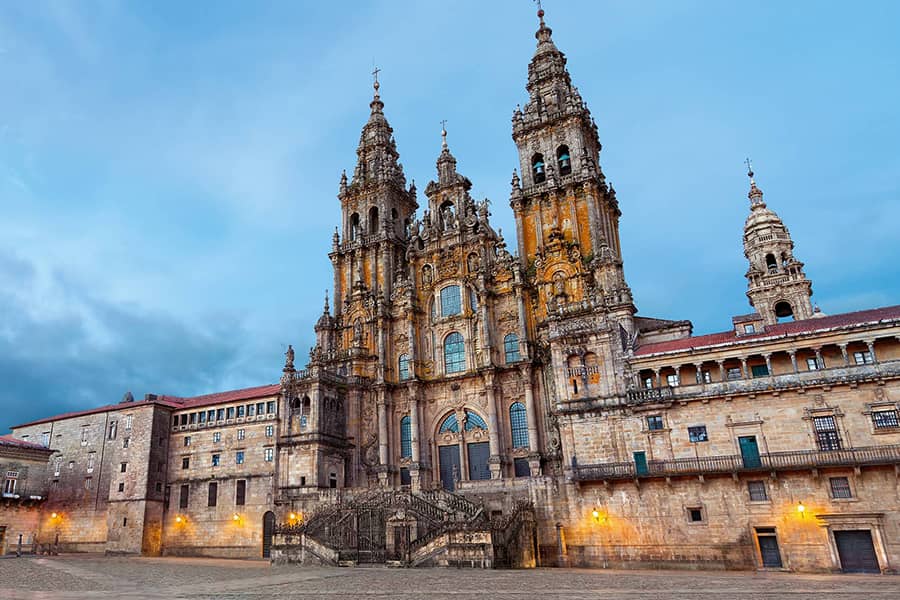 The Santiago Cathedral’s western façade is a Baroque masterpiece which takes its name from the large adjacent square which is where the temple’s stonemasons’ workshops were located. Its architect, Fernando de Casas Novoa, embarked on the construction of a new façade in the year 1738 owing to the poor state that the Glory Portico was in.

The intervention on the façade of Santiago Cathedral was comprised of a pyramidal central body with large windows that joined up with the two existing towers in order to create a symmetrical whole. Moreover, by using detailed ornamentation, Casas Novoa underlined the vertical nature of his work, which was assisted by the Corinthian columns and the progressive narrowing of both the central section and towers of Santiago de Compostela’s cathedral. 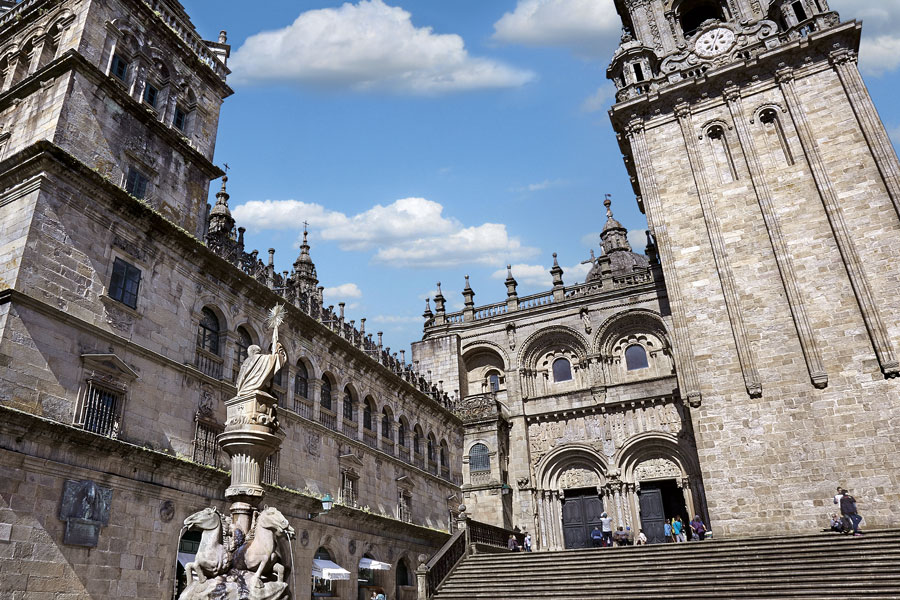 The Platerías Façade, which is named after the silversmiths that worked in the square, is the only façade of medieval origin that the Cathedral of Santiago de Compostela preserves, though various interventions in its ornamentation altered its original appearance. The façade was built between the years 1103 and 1117 as part of the construction program outlined by Archbishop Diego Gelmírez, who had his palace on the southern side of the cathedral.

Thus, the front acted as a nexus with episcopal power, besides being the space in which city hall trials were held. The ensemble is structured around a trumpet-shaped double door with semicircular arches and an upper frieze, which, just like the tympanums, is profusely decorated, while the two windows with lobed arches preside over the second level of the cathedral’s façade.

Located at the intersection of the squares called Platerías and Quintana, the Clocktower was one of the first elements that altered the homogeneity of the Santiago Cathedral. The development of neighbouring districts on the south side of the temple led to the erection of a tower in the fifteenth century which, apart from highlighting the temple’s presence in the town, was spacious enough to house a bell given as a gift by French King Louis XI.

Between 1676 and 1680 architect Domingo de Andrade refurbished the tower, and connected the medieval structure with a profusely decorated arcade, of squared base which in turn connects with an octagonal prism that the dome rests on along with the lantern that is lit during the Holy Years. 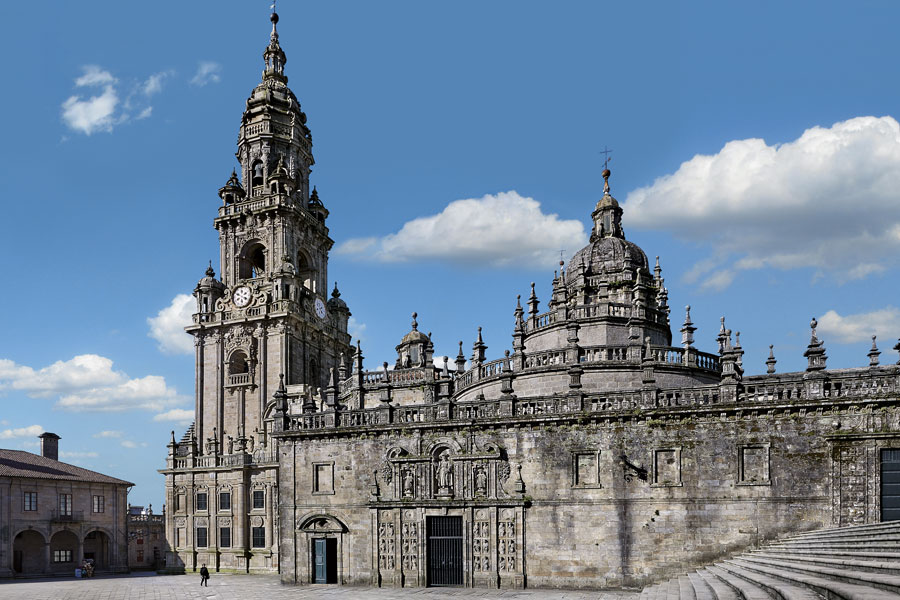 In order to hide the apsidioles that provided an uneven appearance to the medieval cathedral’s chevet, in the seventeenth century Canon José Vega y Verdugo instigated the construction of a uniform enclosure. Thus, in 1658, architect José Peña de Toro set about working on closing the temple in a uniform way, building stone walls that form the façade and he included the cimborrio that was erected on top of the dome.

After Domingo de Andrade completed the refurbishment, the end result was a Baroque ensemble that was organised into two separate canvases (on which the Royal Door and the Holy Door stood out) that formed a large entrance hall for visitors to the Santiago Cathedral.

Initially known as the Door of Paradise, the north façade was always the busiest, as it marked the end of the French pilgrimage route. However, in 1758 the canonry decided to demolish the Romanesque façade and entrusted architect Lucas Ferro Caaveiro with the new one, who drew from the Baroque style and who was soon substituted by Domingo Lois Monteagudo, chosen by the Academy of Fine Arts in order to introduce neo-Classical resources into the design.

Divided into three floors, the resultant façade –known as the Azabachería, due to the presence of craftsmen in the square that worked with jet or lignite (a mineraloid called azabache in Spanish)– was particularly striking for its Greco-Roman character, underlined by the Doric columns on the lower floor and the presence of rosettes and decorative medallions.

On the 23rd of February, 1168, King Ferdinand II of León made it known that Master Mateo –of unknown origin– would receive a lifelong wage in order to complete the western side of the Cathedral of Santiago de Compostela. The privilege earned by the architect corresponded with the complexity of the project, since the sloping terrain meant he would have to devise a solution that was based around three distinct levels.

In order to get over the unevenness, a crypt was planned, a structure that was unprecedented in Galician architecture at the time and which the Glory Portico is built upon, consisting of three flared arches (one for each of the cathedral’s naves) decorated with allegorical sculptures. Lastly, on the upper level, the gallery extension was completed and a vault was added which meant the plans for the crypt and façade could finally come to fruition. 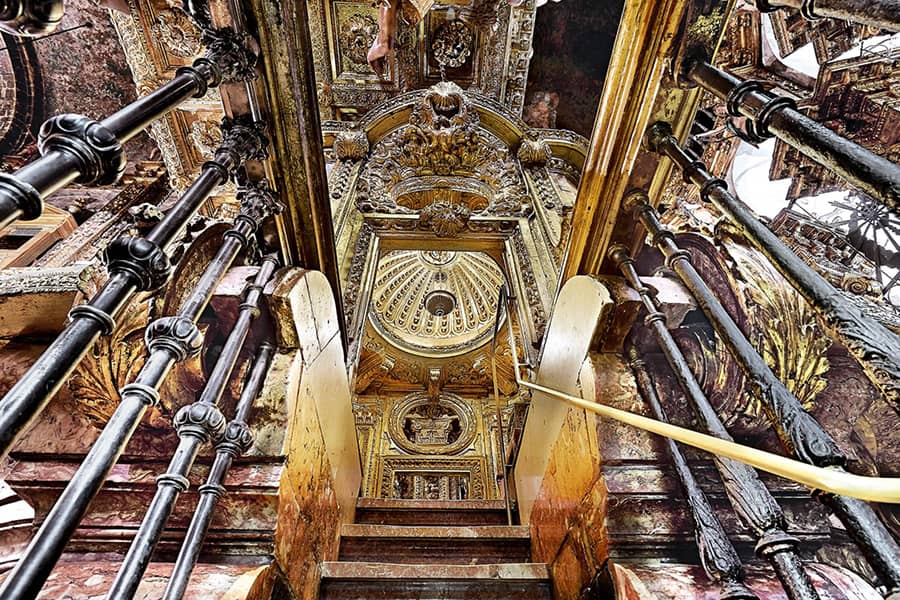 Planned as the largest Romanesque temple on the Iberian Peninsula, Santiago Cathedral is organised around a Latin cross ground plan scheme with two crossing arms. The first one, 97 metres long, goes from west to east and directs the worshippers’ gaze to the chevet –with reference to the path from the earthly to the divine–; while the other goes from north to south.

On the two-armed intersection –each one of them divided into three naves– is the high altar, surrounded by an ambulatory. With this structure, Santiago Cathedral could deal with numerous pilgrims and, at the same time, create a space appropriate for worship.

Started in 1521 by order of Archbishop Alonso III of Vilaseca, the construction of Santiago Cathedral’s cloister –designed over a gallery damaged in the 15th century by a series of popular uprisings– fell upon architect Juan de Álava, in order to later pass through the hands of Rodrigo Gil de Hontañón, Juan de Herrera and Gaspar de Arce.

Despite this shared authorship, the area conserves great unity in its four wings, structured around wide arcades and covered with starred vaults that blend in with the medieval origin of the building.

Built to hold the remains of James the Apostle, the Cathedral of Santiago de Compostela is one of the world’s major pilgrimage sites.

With more than 300 pictures and 3D illustrations this book is one of the most complete books published on the Cathedral of Santiago de Compostela. It provides a unique insight into its origins and architecture. An essential book to find out everything about the cathedral. 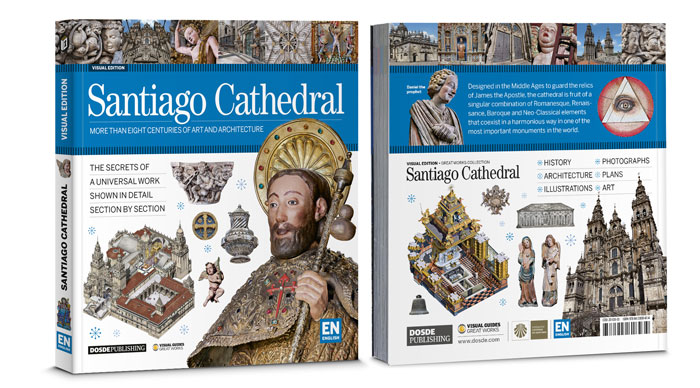