The most important city in the Basque Country has always stood out for its entrepreneurial spirit. After standing out as a merchant port and industrial centre, it has established itself as one of the most attractive cities in Europe thanks to a series of changes that have converted it into a first class financial and cultural centre.

The history of Bilbao

The historical background of Bilbao is full of ambiguity, although the general consensus of opinion is that in the thirteenth century there was already a small fishing village established on the right bank of the Nervión Estuary, where nowadays the old quarter of the city can be found.

Ever since its foundation, Bilbao has developed around the Nervión Estuary, the driving force behind the city’s growth, that favoured the appearance of a dynamic, entrepreneurial and local bourgeoisie who would decisively influence in the evolution and development of the fast-growing municipality.

In the mid-nineteenth century, the advances in the manufacture of steel led to a great demand for Vizcayan iron, which meant Bilbao became a magnet for major steel, iron and naval companies, whose activities contributed to unprecedented wealth.

Meanwhile, the appearance of the town underwent a radical transformation, modernising with new constructions financed by the middle class and extending its territory thanks to the municipal expansion plan. This innovative spirit was demonstrated once again in the late twentieth century, when, after a long crisis Bilbao freed itself from its reliance on the industrial sector to emerge as a financial and cultural capital capable of facing new challenges. 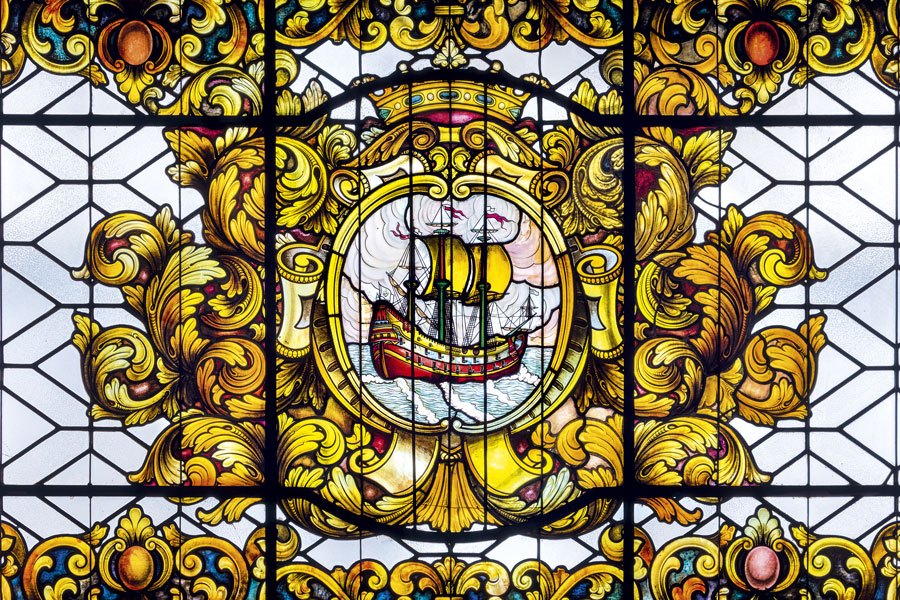 The Old Quarter of Bilbao

The historical centre’s origins are apparent in its structure of parallel streets, a common feature in medieval Basque villages.

A street called Calle Somera, located at the eastern end, near San Antón Bridge, was one of the most populous and stood out for its concentration of cobblers, arms manufacturers, shopkeepers and scribes. On a street named Calle Tendería there was a concentration of boutiques and tailors and Calle Belosticalle was home to the fishmongers, and a street called Barrencalle Barrena, the road nearest to the estuary, attracted numerous merchants and sailors.

From the sixteenth century, the steady rise in population meant it was necessary to expand the village beyond it walls, which meant new streets were planned around the suburbs of San Nicolás, Arenal and Ibeni, which had been developing in conjunction with the city. With this expansion the present boundaries of Bilbao’s old quarter were defined.

The Plaza Nueva, Santiago Cathedral, the Ribera Market, the Bidebarrieta Library and the luxurious Arriaga Theatre are just some of the many interesting places to visit in Bilbao. 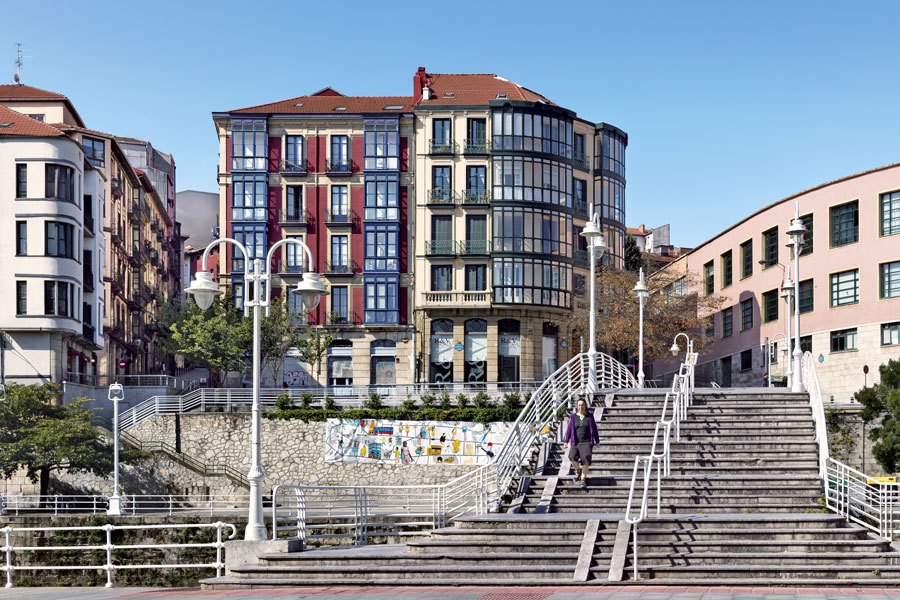 The Arenal and the Ensanche

In the nineteenth century, as a result of intense industrialisation, Bilbao witnessed unprecedented demographic growth that the old quarter could no longer deal with. Not even the recent urban extension to the Arenal was able to cope with the large population increase.

In answer to this problem, in 1861 the Spanish Government decided to give the town the right to extend its city boundaries to the detriment of neighbouring towns that had previously resisted annexation. This resolution led to the creation in 1876 of the Ensanche district, (in Spanish Ensanche means enlargement) a neighbourhood that perfectly suited to the needs of industrial society and soon attracted the great fortunes and official institutions who promoted the construction of sumptuous buildings as a faithful reflection of the town’s growing economic wealth. The Ensanche soon converted into the new heart of the city of Bilbao, a function that it continues to fulfil this present day in the twenty-first century.

The construction of the new Town Hall was commissioned to Joaquín Rucoba, also responsible for the Arriaga Theatre, who designed a rectangular, monumental building topped with a bell tower. Concluded in the year 1892, the work proved to be very expensive, which was largely due to the opulent décor devised by the architect to convey the city of Bilbao’s rise and development during the late nineteenth century.

The buildings in the Ensanche demonstrate how the city has modernized  itself. The  construction of the Estación de la Concordia, the Estación de Abando, the Palacio de la Diputación Floral or the Universidad de Deusto reflect the growth of a town that has set out to provide the infrastructures and administration buildings necessary for its inhabitants. 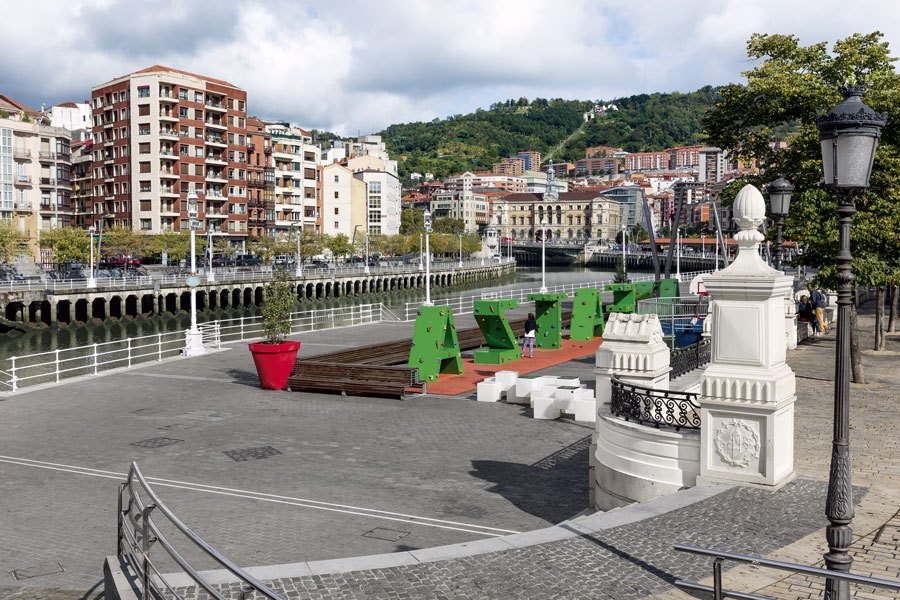 With its sculptural design the façade of the Guggenheim Museum overlooking the estuary has converted in a symbol of the city.

The construction of the museum started in 1991, with a plan to revitalize Bilbao following the industrial decline of the 1980’s. At the start of 1991 the Basque institutions got in touch with Solomon R.Guggenheim Foundation in order to form an alliance that would lead to the construction of a contemporary art gallery in collaboration with the prestigious institution established in New York.

The architect who would design it would be North American Frank O.Gehry, who created a groundbreaking building. Since its inauguration in 1997, the mere presence of the Guggenheim, in effect, has been the trigger for Bilbao’s transformation and, more precisely, for the recuperation of the estuary as the city’s main backbone. 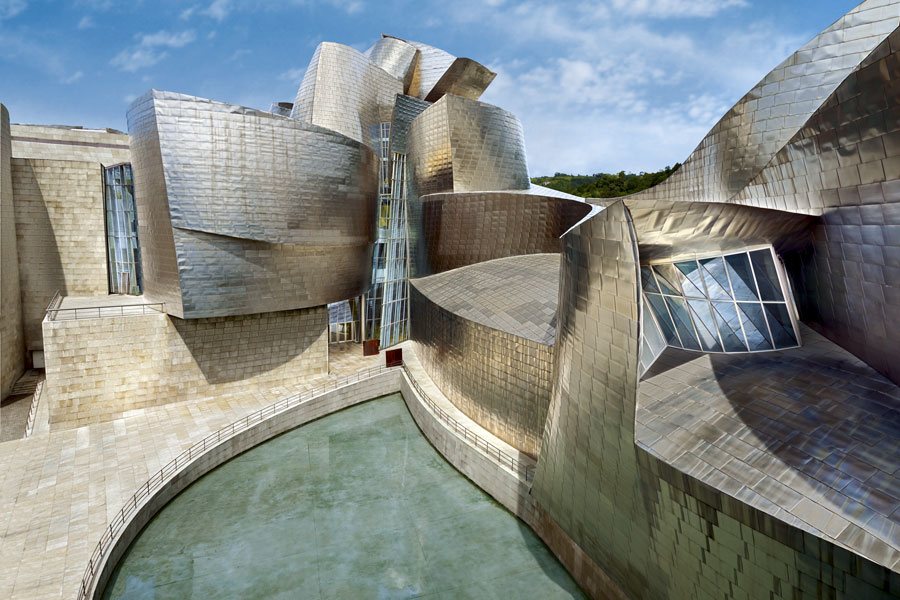 In the 1980’s, the town had become a grey and troubled place, with no particular appeal. Both the steel industry and the naval sector, which until then had been the main engines of growth in the municipality, had begun an irreversible decline that led to the disappearance of some of the most emblematic businesses of industrial Bilbao. This social and economic crisis meant the Basque Institutions had to outline a plan to guarantee the future of the city: to convert Bilbao into a first rate European tourist centre and commercial capital.

Subsequently, the public administration –accompanied by the skills and know-how of internationally famous architects– invested in the very best of infrastructures and supported ambitious urban development projects that meant the estuary would be totally regenerated with new uses being given to the spaces previously set aside for industrial use. These interventions laid the foundation for present-day Bilbao, a cosmopolitan metropolis equipped with up-to-date services and influenced by the latest artistic and architectonic trends

The Iberdrola Tower, the Alhóndiga in Bilbao, the Euskalduna Palace, the Library of the University of Deusto and Abandoibarra Park are some of the constructions that have been established as emblematic monuments of Bilbao.

The metropolitan area of Bilbao actually extends to the mouth of the Nervión Estuary, where Portugalete and Getxo are, two municipalities located respectively on the left and right banks of the estuary that share a common history.

Due to their coastal location, from the middle of the nineteenth century, both Portugalete and Getxo proved popular as summer destinations, appealing to prominent members of the Spanish aristocracy and the bourgeoisie whose wealth was derived from the rapid industrialisation of Bilbao. During these years of economic prosperity, the two municipalities filled up with luxurious spas and stately homes designed to accommodate the wealthy holidaymakers who wanted to be close to the sea and breathe in the fresh air provided by the estuary.

Both locations have managed to retain their status as first-class tourist destinations by virtue of their privileged position on the estuary mouth and the wide range of cultural and leisure attractions that Greater Bilbao has at its disposal.

A book on Bilbao to explore the city

Characterised by its constant evolution and modernisation, Bilbao has converted into one of the most dynamic cities in Europe. After standing out as a merchant port and industrial centre, nowadays Bilbao has established itself as an entrepreneurial and dynamic city, where architecture has taken on an important role.

This photography book on Bilbao proposes a detailed visual tour around the city, with incredible photographs, thorough information and fascinating facts about its most emblematic places.

Published in a manageable and compact format, this photography book by Dosde shows off a city that has become internationally recognised and respected. The book completes the collection of books on Bilbao produced by the publishing house.