The history of the Sagrada Familia

In 1872, a Barcelona bookseller, Josep Maria Bocabella, a deeply religious man, returned from a trip to Italy convinced of the need to dedicate an expiatory temple, funded by worshipper donations, to the Holy Family (Sagrada Familia). He therefore purchased a plot of land in the Eixample, the new district designed by Ildefons Cerda, and the task of erecting the temple was entrusted to diocesan architect Francisco de Paula del Villar, who designed a neo-Gothic style church.

However, no sooner had the crypt columns been erected, Villar resigned due to differences with Bocabella’s consultant, Joan Martorell, who was then offered the position but declined, proposing Antoni Gaudí instead, a promising young architect who at that time was starting work on his first major project, Casa Vicens, a summer villa in Gràcia.

It was 1883 and Gaudí, aged thirty-one, had to abide by the basilica’s orientation and the work already done on the crypt by Villar, but he nonetheless proposed a much more ambitious project. The architect from Reus conceived a temple with five naves, a crossing, an apse, a cloister-outer ambulatory, three façades and eighteen towers. Within this immense space, Gaudí thought to include all the symbolic elements of Christianity in order to convert the Sagrada Familia into the perfect temple, into a building totally equipped for the celebration of liturgical rites.

Gaudí was to devote forty-three years of his life to the project. At the time of his sudden death, in 1926, aged seventy-three, only the crypt, apse, cloister, Nativity façade and four towers had been built. Thanks to the numerous studies carried out by Gaudí, work could be reinitiated and today the Sagrada Familia is considered a universal masterpiece.

Discover some details of the Sagrada Familia with this article that analyses all its nooks and crannies and rich arquitecture.

The crypt of the Sagrada Familia 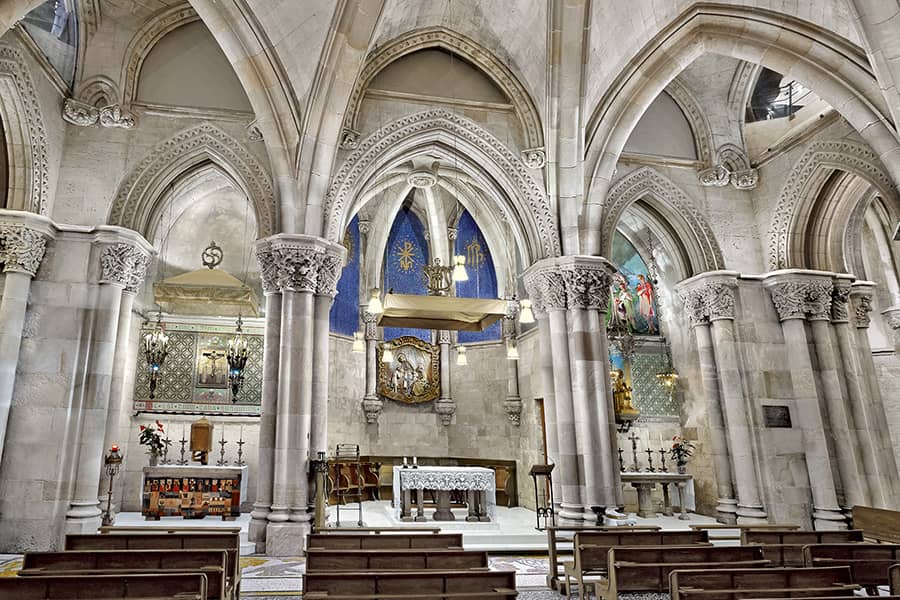 The excavation of the crypt of the Sagrada Familia started on the 19th of March 1882 (coinciding with the celebration of Saint Joseph’s Day), under architect Francisco del Villar’s management, who resigned just a few months into the building project.

His place was taken by (now 1883) the young Antoni Gaudí, who initially planned on bringing in significant changes to structure and arrangement of space but who, for economic and budgetary questions, decided not to carry them out and ended up maintaining the existing structure started by his predecessor.

Thus, the layout of the crypt would be seven apsidal chapels (one of them dedicated to Saint Joseph) in semicircular shape, an ambulatory, a spacious central area and another five chapels where the central altar is located. 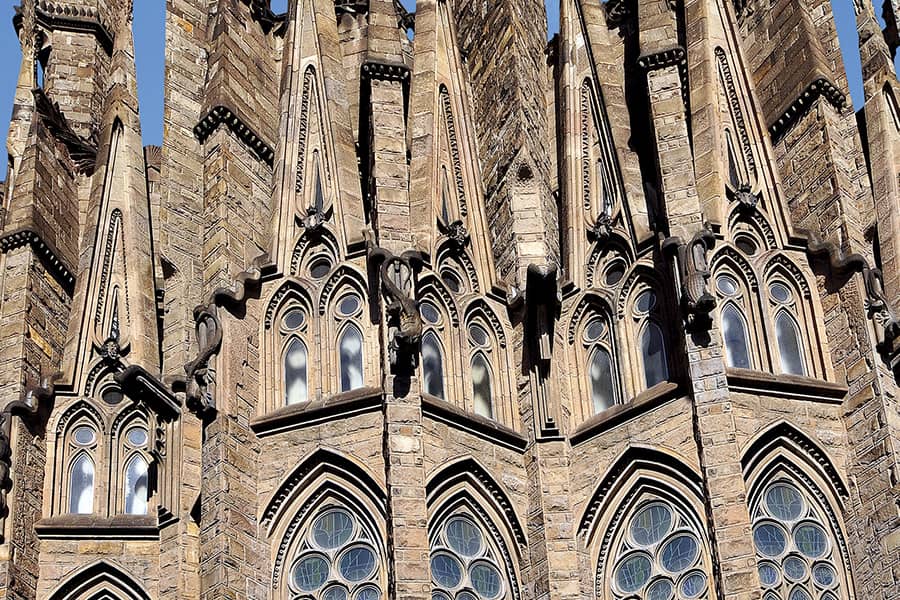 The Sagrada Familia’s apse structure responds to Gaudí’s creative genius, whose “perfecting of the Gothic” describes the designs he introduced in this section. As well as persevering to support walls without resorting to buttresses, the architect also exaggerated arrises so chiaroscuros would be created to highlight the apse’s volume.

Likewise, he topped the apse with pinnacles that emphasized verticality, reinforced the splendour of the cimborio, and the apse was decorated with depictions of flora and fauna that show his love of nature. 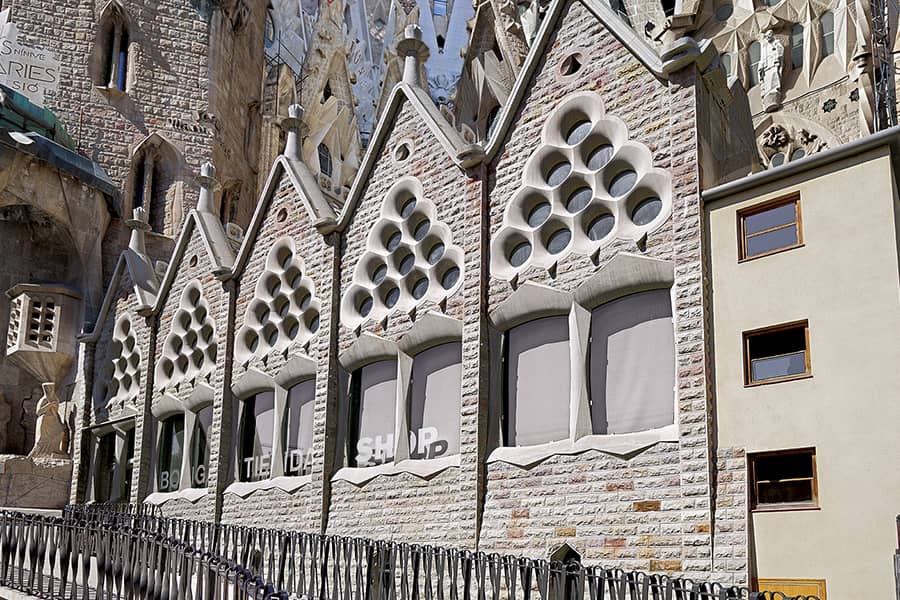 Gaudí designed the cloister of the Sagrada Familia as an arcaded, rectangular passageway whose four sides correspond to the four façades. It is formed by the repetition of multiple stretches or modules of rectangular ground plan, roofs with cross vaults and topped with triangular pediments.

Despite being an enclosed space, and despite the absence of a garden (an element that is put in the centre of many traditionally shaped cloisters) the natural illumination of the arcaded corridor designed by Gaudí is assured thanks to the windows and rose windows that overlook the exterior in each one of the modules.

Likewise, as the level of the ground is at the same height as the naves of the temple, the architect takes advantage of the difference in height with the street in order to create a mezzanine that can be used for different purposes.

Gaudí wanted to convert the inside of the Basilica of the Sagrada Familia into a large forest in which the structure of columns, vaults and roofs would work by imitating trees, with the trunk, the branches and, covering the structure, the foliage which the sun light filters through.

This innovative solution was designed to create a transcendental atmosphere appropriate for prayer and meditation and to provoke a contrast with the ground plan, in which the architect opted for a traditional structure of five naves, divided up by four rows of columns and crosscut by a transept, and a presbytery where the high altar is found (significantly raised above the level of the rest of the temple), an ambulatory and seven radial chapels. 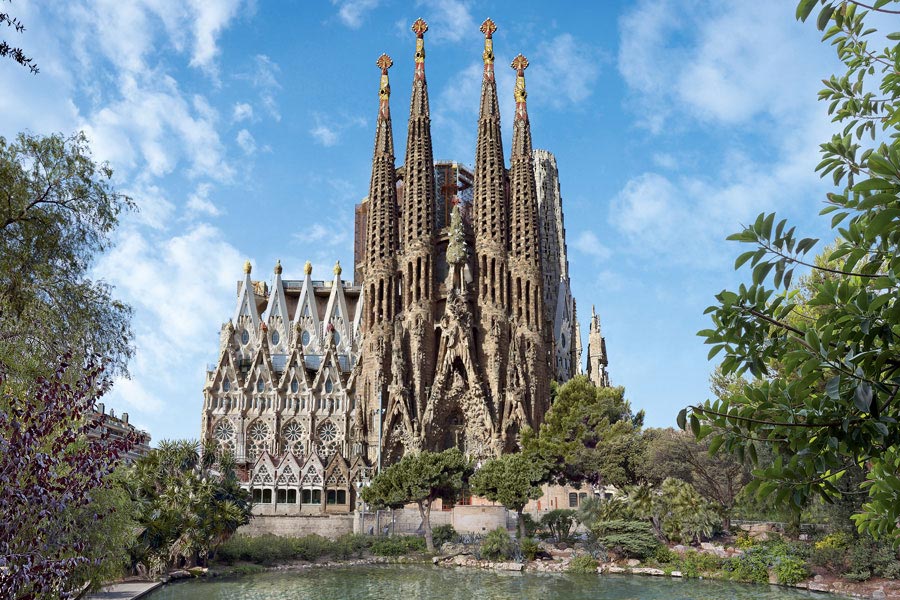 Although Gaudí considered the Gothic as an “imperfect” genre, with the Sagrada Familia’s Nativity façade he followed a scheme typical of this style and structured it around three porticos (a central one and two lateral ones) accompanied by four bell towers on the eastern side and lodged in the hollows of these towers’ bases.

The architect dedicated them to the three members of the Holy Family, each linked to a theological virtue: the portico on the left represents Hope, a virtue associated to Saint Joseph; the central one, dedicated to Jesus, represents Charity, which is topped by a naturalist pinnacle (The Tree of Life) which competes in height with the towers: and the portico on the right represents Faith, personified by the Virgin Mary. 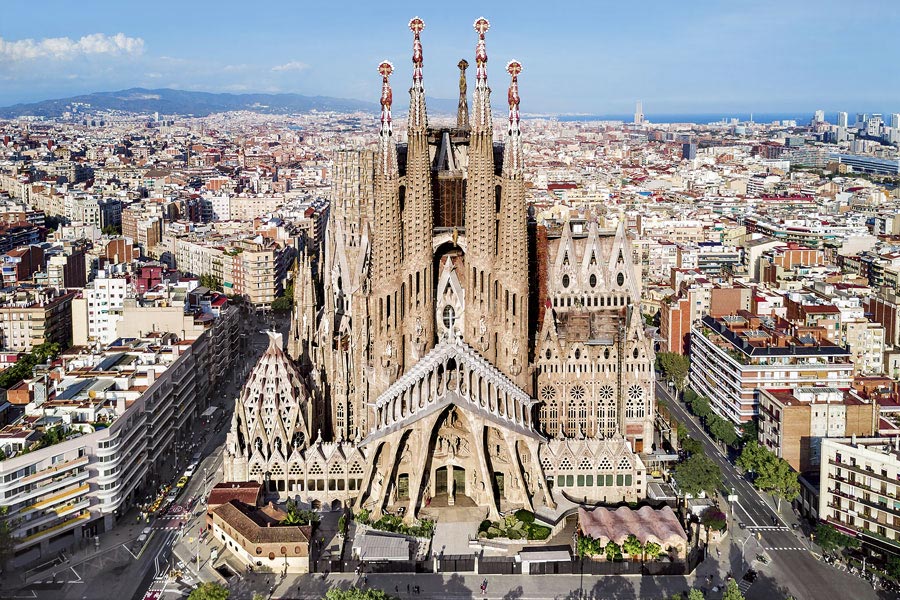 In contrast to the vitality, joy and tenderness that the Nativity façade conveys, the Passion, which is situated at the opposite end of the transept, depicts the sadness of pain and suffering. In 1911, Gaudí took off to the Pyrenees to get over a serious illness and inspired by his own pain, he dedicated this period to planning the Passion façade of the Sagrada Familia.

The artist foresaw the impact that his idea would have and decided that its construction should commence once the Nativity was finished. His death and the Civil War stopped this project laid down in sketches and drawings from becoming reality until 1954. The architect devised a portico held up by six leaning columns, over which a great frontage is raised on eighteen bone-like pillars. The different sculptural groups tell the Passion of Christ on a façade devoid of ornamentation. 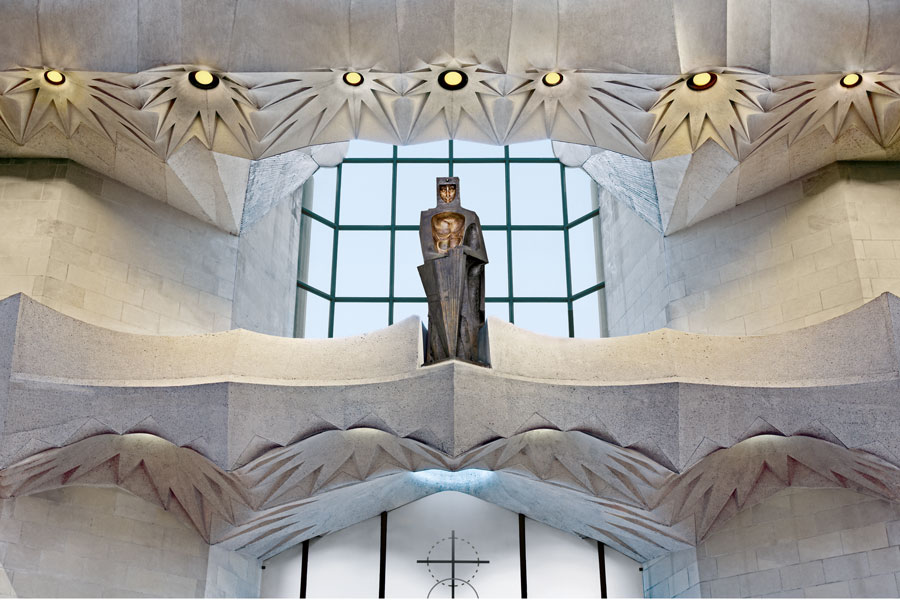 The Glory façade is the monumental framework Gaudí devised to provide entry to the temple. His idea was that, before entering the Sagrada Familia, worshippers would be conscious of the role of man inside the general order of Creation and of his destiny in accordance with the Divine laws: Death, the Final Judgement, Hell and Glory.

Below the apostles’ towers such as Saint Peter’s, Saint Paul’s, Saint Andrew’s and James the Elder’s (higher than those that top the other façades), the architect designed an ensemble of 16 unequal lanterns of hyperboloid layout, one of which (the central one) rises until it competes with the towers. Over this structure, which serves as a roof for the portico, Gaudí envisaged a cluster of large, illuminated clouds containing the words from the Creed, the prayer that sums up the dogma of Christian faith. 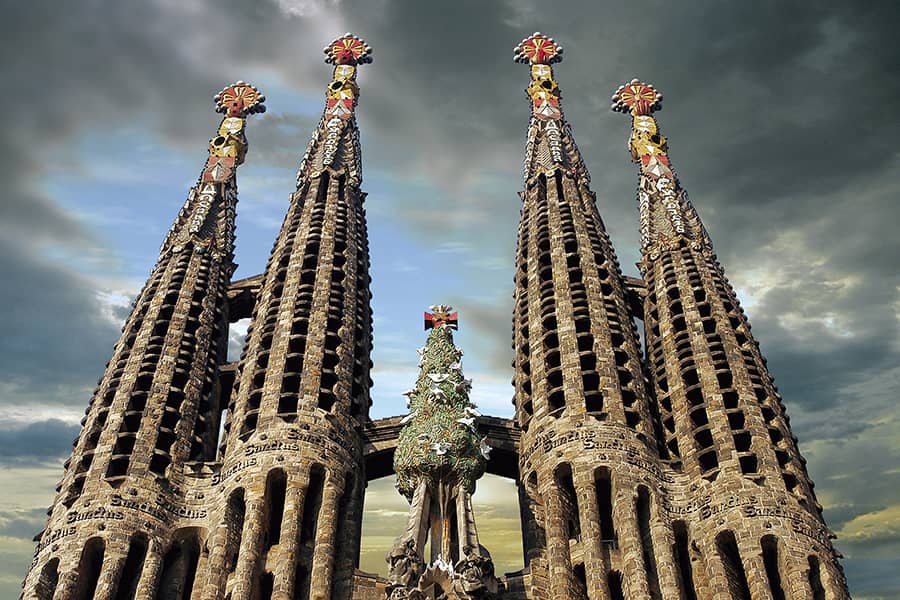 Gaudí devised the elevations of the 18 towers of the Sagrada Familia in order that they grow in height according to the symbolic hierarchy of whom they represent and in accordance with their position in relation to the centre of the temple’s ground plan: Jesus’ cimborio culminates the ensemble at 172.5 metre high and is seated over the crossing. The four Evangelist cimborios reach 135 metres and rise up flanking the largest cimborio, as well as the Virgin Mary one, which rises 130 metres over the apse.

Finally, the twelve bell towers, dedicated to the apostles, rise, in groups of four, on the periphery of the building, over the three porticos providing access, and measure from 98 to 120 metres. In order to get the most out of the visual and symbolic aspect, all the Sagrada Familia towers culminate in spires clad in glazed ceramic work from the Island of Murano (Italy).

The best book to discover the Sagrada Familia

The book “Sagrada Familia, the important work of Gaudí” tells you all you need to know about the Sagrada Familia. More than 700 pictures including photographs, drawings, plans and illustrations. Gaudí’s major work seen as never before. Published by Dosde, it is one of the most complete books on Gaudí’s architectural masterpiece. 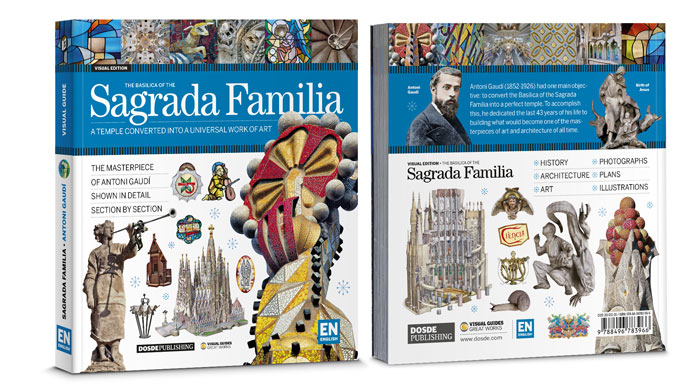