The works of Antoni Gaudí

Born in 1852 in Reus near Tarragona, Antoni Gaudí i Cornet is one of the major representatives of Catalan Modernism and one of the great advocates of art nouveau in Europe. However, his architecture evolved into a very personal and difficult style to classify.

In each of his marvellous works he was able to anticipate revolutionary forms and techniques that were universally used in modern twentieth-century architecture.

Antoni Gaudí started his professional career very much influenced by the eclectic style, and this is attested by his first important commissions. With Casa Vicens, the architect imaginatively incorporated numerous details inspired by Oriental Art, such as glazed tile work and plant and geometric decorative patterns.

Contemporaneous with Casa Vicens, the summer residence known as the Caprice falls within the eclectic phase of Gaudí, who used polychrome tiles to provide the building with colour and was influenced by the minarets found in mosques when designing its narrow lookout-tower. The last major project of oriental style were the pavilions on the Finca Güell property, whose detailed exterior decoration harks back to Mudejar craftsmanship. Its interior, based on the use of catenary arches and hyperboloid cupolas, constitutes an indication of the stylistic evolution of the architect, who started to outline an artistic language that moved further and further away from orthodoxy.

The recuperation of medieval splendour

The formative years of Antoni Gaudí were also marked by the boom of neo-Gothic architecture, a trend that inspired the most prosperous period in the history of Catalonia. Institutions such as the Provincial School of Architecture of Barcelona encouraged the study of medieval shapes and structures, at the same time as projects of historicist character proliferated throughout the land that emulated the appearance of the great cathedrals and castles.

This is how, Gaudí –who went to work as a draughtsman for the finest exponent of the Catalan neo-Gothic style, Joan Martorell– took on this constructive language in a natural way and incorporated it into the most significant projects that he undertook in the late nineteenth century, from Güell Palace –where he still used a wide range of orientally inspired details– up to Torre Bellesguard, including the Episcopal Palace of Astorga, the Teresian College, Casa Botines and the Güell Winecellars.

By means of constant experimentation, Gaudí gradually refined his neo-Gothic style, putting formal aspects to one side in order to move towards a more integral architecture, in which each element adjusts to its function and where structures are designed to achieve balance with the minimum effort and cost. This original vision set him apart from other architects of the time, as well as laying the foundations of the technical resources that he developed in years to follow.

The naturalist style in Gaudí’s works

When he reached his personal and professional maturity, Antoni Gaudí progressively broke away from historicist influences in order to search for inspiration in nature, which he clearly defined as “a great book, always open, and which one must endeavour to read”. Consistent with his words, the architect conscientiously studied the natural environment with the objective of discovering the most appropriate solutions for his latest projects.

One of his main conclusions was that the shapes found in nature are basically structured around curved forms, and for this reason it is very rare that natural forms possess the straight lines that predominate in constructions of human origin. At the same time, the analysis of animals and plants led him to deduce that beauty is always the result of the search for functionality, in such a manner that architecture has to follow this path in order not to convert into just a simple exercise of aesthetics.

Finalized in the year 1899, Casa Calvet was one of the first works to reflect this transition made by Gaudí towards a genre of naturalist character, which was to blossom a few years later with projects that included the Güell Colony, Casa Batlló, Park Güell and La Pedrera, in which the pre-eminence of undulating lines and the fusion of structural and decorative elements gave rise to an architectural style that was totally organic that outgrew all the conventions of the period. 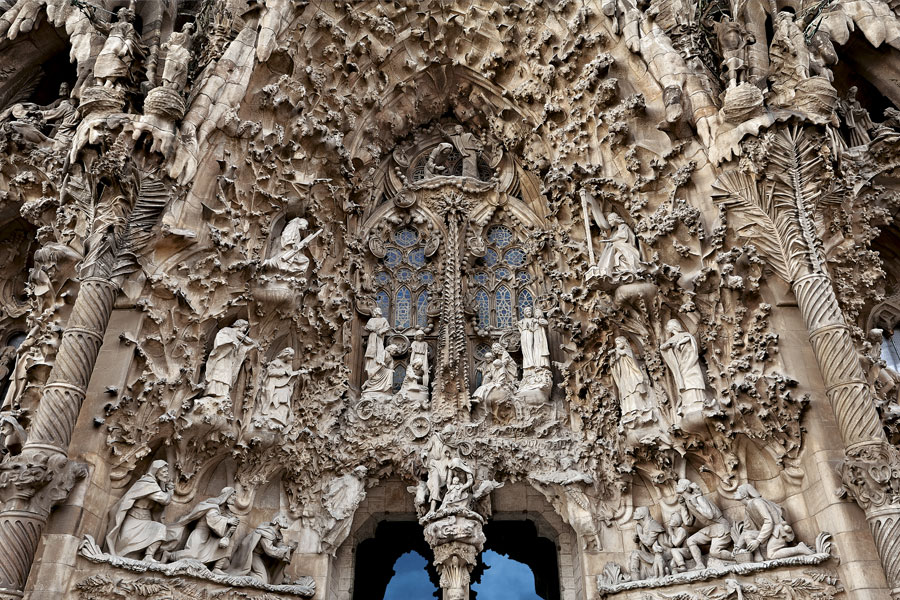 The artistic growth of Antoni Gaudí was reflected in the Sagrada Familia, the work which he dedicated 43 years of his career to –12 of them exclusively– and during which he was able to perfect all the techniques developed throughout his professional life. Due to the initiative of bookseller and philanthropist Josep Maria Bocabella, the temple’s construction commenced in 1882 in the Barcelona neighbourhood of the Eixample under the management of architect Francisco de Paula del Villar, who resigned just one year after the building work started owing to differences of opinion.

Gaudí, who at that time was involved with work on Casa Vicens, was chosen to take over from Del Villar, a task that he assumed with great confidence. After introducing subtle but relevant changes to the crypt –initiated before his arrival–, he radically altered the original project in order to design a monumental temple with five naves, crossing, apse, an exterior cloister-style ambulatory, three façades and 18 towers.

In this immense constructive area, Gaudí planned the inclusion of all the symbolic elements of Christianity, in order to convert Sagrada Familia into a building totally prepared for the celebration of liturgical rites. This way, the construction of the perfect temple converted into the lifetime project of the architect, who worked almost obsessively in the search of solutions that would allow him to exceed the limitations of the Gothic and bring his revolutionary ideas to life.

All Gaudí’s works in one book

With more than 750 pictures, computer graphics and 3D exclusive recreations, this visual guide covers the complete work of Antoni Gaudí. It includes from his most emblematic works to his lesser known projects, analyzing them section by section. An absolute essential to know everything about Gaudí.