5 things you didn’t know about Dalí

Admired for his boundless imagination, Salvador Dalí became an icon of modern art thanks to his immense creative capacity and the magnetism of his public figure.

In this article we reveal five fascinating facts about Salvador Dalí, considered one of the most versatile creators of the 20th century.

1. HE WAS EXPELLED FROM THE SCHOOL OF FINE ARTS

Salvador Dalí from his student days exhibited a strong artistic personality. His deep knowledge of tradition and alternative cultural trends led the painter to repeatedly rebel against an academic system that he considered obsolete, to the point that he even came to be expelled from the Escuela de Bellas Artes (the School of Fine Arts) for undermining his teachers.

At the same time, the innate ability of the artist to draw from and appropriate the most diverse of styles quickly positioned him as one of the great promises of his generation.

2. HE WAS AN AUTHENTIC MEDIA STAR

Dalí regularly appeared on television, especially in the United States. One of his most impressive appearances came in the year 1961 on the programme The Ed Sullivan show, where he showed his gun painting method.

Following his father’s orders, in 1922 Dalí moved to Madrid to begin his studies of Fine Arts at the Royal Academy of San Fernando, the most prestigious institution of the country, where all the painters went who wanted to guarantee stable future employment.

Within this dynamic environment, Dalí became friends with other young people like himself, including the filmmaker Luis Buñuel and poet Federico García Lorca, which would mark his personal evolution.

In April 1929 Salvador Dalí returned to Paris to work with his friend Luis Buñuel on the development of the short film known as Un Chien Andalou (An Andalusian Dog). The film was screened on the commercial cinema circuit and was well-received by the public, and helped Dalí’s name to be better recognised in avantgarde circles.

When he was already famous worked for the American filmmaker on a failed project. Harpo Marx and Alfred Hitchcock also called on his services.

5. A WINNER IN THE UNITED STATES

Three weeks after his first solo exhibition was inaugurated in London, on the 14th of November 1934 Dalí landed in the city of New York with his inseparable companion Gala. Before his arrival, the North American public had already become familiar with his work thanks to the tireless advocacy of art dealer Julien Levy.

The appointment was a bestseller and was widely covered by the New York media, who devoted countless interviews to him and gave him rave reviews.

Aware of the commercial possibilities that were on offer in the United States, a country receptive to new ideas, Dalí enhanced his most extravagant side in order to catch the attention of the public.

Moreover, the painter strengthened his position within Surrealism by lecturing in prestigious centres such as the Museum of Modern Art of New York, an institution that ended up being fundamental to the dissemination of Dalí’s work.

Salvador Dalí is considered one of the greatest artistic exponents of the 20th century. This book on Salvador Dalí studies in detail the works of this genius of Surrealism. Discover the meaning of his paintings, his artistic influences and some fascinating facts about the life and work of the ingenious creator. 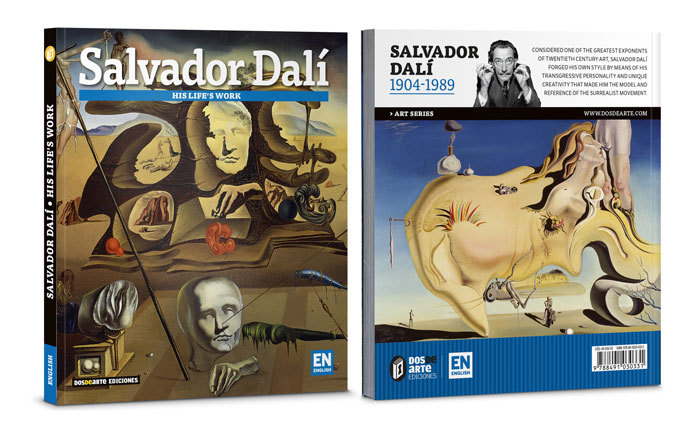