5 things you didn’t know about Picasso

Pablo Ruiz Picasso set the course of contemporary art with his revolutionary artistic contributions, whose influence spread throughout the world and which still remain in force today.

In this article we’ll tell you five fascinating facts about Pablo Picasso that you never knew.

1. HE WAS CLOSE TO DEATH THE DAY HE WAS BORN

The future artificer of Cubism was born in the city of Malaga —one of the most important cities in the south of Andalusia— on the 25th of October 1881, just a few minutes after eleven o’clock at night.

As he neither breathed nor cried, he was given up for dead by the midwife. Abandoned on a table, Picasso revived thanks to the smoke coming from the cigar of his uncle, Doctor Salvador Ruiz.

“I immediately reacted with a grimace and a furious yell”, the painter recalled years later, who turned this episode into a symbol of his tenacity and his lust for life.

In 1898, along with his friend Pallarés, he lived in a cave for a few weeks, far from civilization they lived in quite a wild way. In the mornings they would get the surrounding landscape down on canvas, and when night fell they would have long drawn out conversations.

He learnt how to milk cows, extract water from the well and shoot with a rifle.

3. A BROTHER AND SISTER CHANGED HIS DESTINY

After several failed attempts at getting ahead in Paris, around 1905 Picasso met the brother and sister, Leo and Gertrude Stein, who were to make quite a difference to the painter’s future.

The Steins settled in Paris in 1903 and were making the most of the inheritance left by their parents in order to build up one of the best art collections in the French capital. .

As a result of this meeting, Picasso converted into one of the brother and sister’s most important artists, as well as a very close friend to Gertrude.

In the spring of 1906, Picasso saw his economic situation greatly improve.

4. ONE OF HIS PAINTINGS WAS REJECTED

By July 1907, Picasso gave the final touches to the painting that had occupied his thoughts over the last months: Les Demoiselles d’Avignon. Set in a brothel, Picasso’s new creation was totally revolutionary.

At the age of twenty-five, Picasso had ushered in a new era in the history of art. He had created Cubism.

Les Demoiselles d’Avignon was subject to almost unanimous rejection. Neither the closest friends of Picasso understood the painting when they first contemplated it.

In search of moral support, Picasso asked for the opinion of German art collector Wilhelm Uhde, who had always shown himself to be receptive to the most avantgarde trends.

Despite initially feeling disconcerted, Uhde was able to detect the greatness of Picasso’s new work and introduced the artist to art dealer Daniel-Henry Kahn-Weiler, with whom he would have one of the most fruitful business relationships of his career.

5. HIS LIFE WAS PACKED WITH LOVE AFFAIRS

Picasso’s love life was marked by numerous women, with whom he had a total four children.

His first great love was Fernande Olivier, then he later fell in love with Eva Gouel, whose death due to illness devastated the artist.

A few years later he met Olga Khoklova, whom he married and had his first son by. Later he fell in love with Marie-Thérèse Walter, with whom he had a daughter; and later on embarked on an affair with the Surrealist photographer Dora Maar.

As he grew older, the painter had a long relationship with Françoise Gilot, with whom he spent 10 years and had two children. His last partner was Jaqueline Roque, who stayed with him until the very end.

A complete analysis of Picasso’s work

Picasso was one of the most creators and painters of the 20th century. His creative ability placed him at the forefront of the avant-gardes. Picasso surpassed the limits of his time.

Our book “Pablo Picasso, his life’s work” closely explores the works that Picasso carried out during his life. It is a complete analysis of his creative periods, explaining each creative stage, from his youth to his maturity as an artist. The most complete visual book on Picasso’s work. 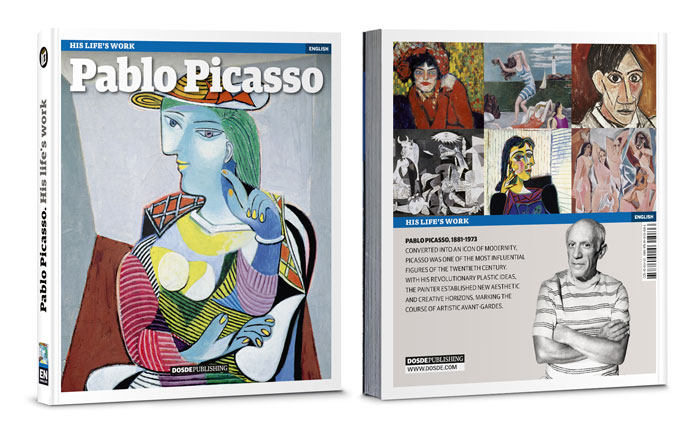