Since its beginnings, and over the centuries, Barcelona has always played host to major artistic events that have transformed and determined the character and the heterogeneous personality of the city and its inhabitants.

Thanks to this innovative and creative nature –which has seduced great artists, architects and intellectuals alike–, Barcelona has become one of the most dynamic and cosmopolitan cities in Europe, as well as one of the main centres of dissemination of the Mediterranean culture.

The Old City of Barcelona

The origin of Barcelona dates back to the year 10 BC, when Roman Emperor Octavius Augustus founded the colony of Barcino on Mons Táber, a hill situated on a fertile plain delimited by the Mediterranean Sea, the Collserola mountain range and the Rivers Llobregat and Besòs.

Despite being located between two major cities such as Tarraco (Tarragona) and Emporiae (Ampurias), the colony became a strategic enclave owing to its excellent maritime and overland connections, with its walls reinforced in order to strengthen its position and to ward off possible sieges.

Nonetheless, this fortification was unable to deter, following the decay of the Roman Empire, the subsequent invasions by the Visigoths, the Muslims and, lastly the Franks, who in the ninth century founded the dynasty of the countship of Barcelona. Owing to an intelligent policy of alliances, in the Middle Ages the city became the capital of the Crown of Aragon and its strong economic growth was reflected in the construction of numerous civil and religious buildings within its walled-in area.

Nowadays, this historic quarter is encompassed within the Ciutat Vella neighbourhood, which –as well as standing out for its rich architectonic heritage– is host to a hive of commercial and cultural activity which harks back to its former medieval vitality. 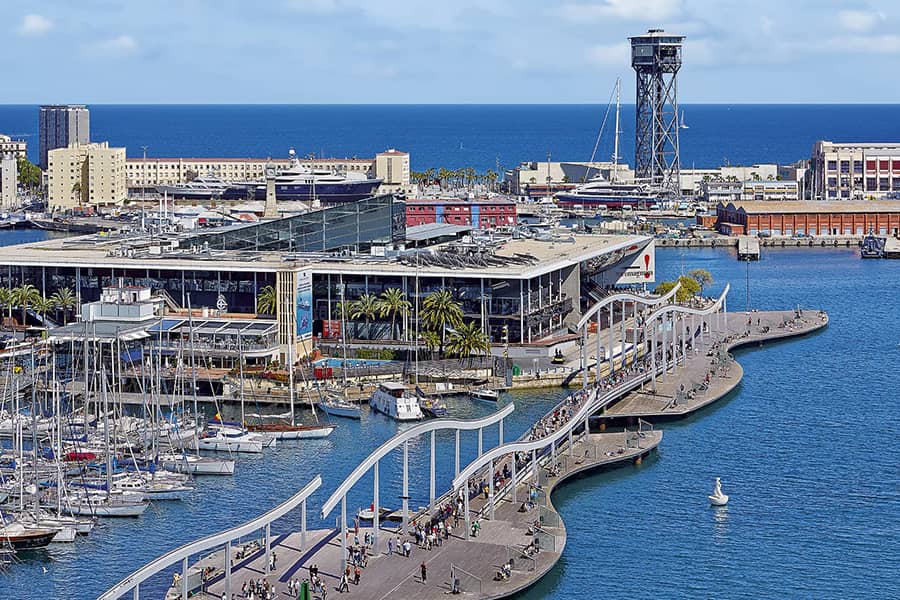 Barcelona has had a close connection with the sea since its very beginnings, a feature that has contributed in a decisive way in forging its cosmopolitan and dynamic character. This maritime vocation started with the arrival of the Romans, who rapidly incorporated the colony of Barcino into their extensive Mediterranean commercial network; though it was with the constitution of the Crown of Aragon when the city really became an overseas power to reckon with, capable of competing with capitals such as Genova and Venice.

However, despite its frenetic nautical activity, the presence of its medieval walls and port facilities meant that for centuries citizens were unable to freely interact with the coast. The celebration of the Olympic Games in 1992 put an end to this problem, by bringing about a far-reaching reform that would imply the integration of the coast into the urban fabric of the city.

With the regeneration of the metropolis’ beaches and the construction of new facilities such as Port Olímpic and Maremagnum, amongst other initiatives, Barcelona is now bound much more tightly to its seafront, its coastline is now a highly valued space for public use which, at the same time, constitutes the entrance way for the millions of visitors that are lured to the city seduced by its Mediterranean spirit. 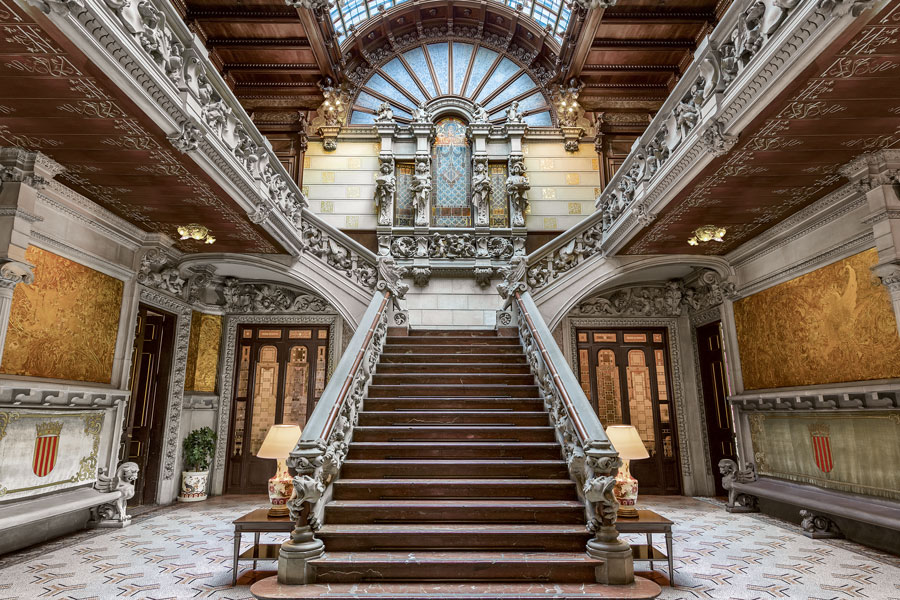 Between the late nineteenth century and the start of the twentieth century, in various European countries a new artistic trend was evolving simultaneously that stood out for its ornamental richness, dynamism, predominance of curved lines, taste for asymmetry and admiration for the natural world.

In Catalonia, this genre was called Modernisme and was warmly received in Barcelona, a metropolis that was undergoing an economic, cultural and urbanistic boom that had its roots in the Industrial Revolution and which culminated with the celebration of the first Universal Exhibition of Spain in 1888.

A unifying force of all the Arts, the modernist architecture of Barcelona became one of the main signs of social status of the Bourgeoisie, whom –with the aim of showing off their strength and anxiety for renovation– backed the construction of large projects, the majority of which were concentrated in the neighbourhood of the Eixample.

With the financial support of the wealthy, architects such as Antoni Gaudí, Josep Puig i Cadafalch, Lluís Domènech i Montaner and Enric Sagnier, amongst others, let free rein to their imagination in order to design facilities and residential buildings that, apart from radically altering the appearance of the urban landscape, became icons of the Modernisme of the more creative Barcelona. 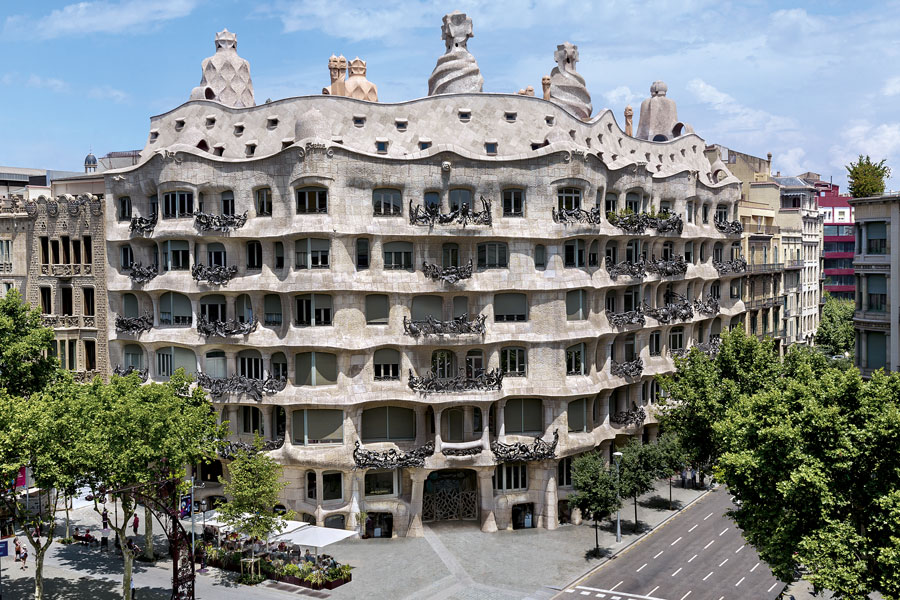 Born in 1852 in Reus (Tarragona), Antoni Gaudí i Cornet is inextricably linked to Barcelona, the city in which he spent most of his professional life. Contemporaneous with great names of Catalan Modernism such as Lluís Domènech i Montaner, the architect moved away from Historicism, which was prevalent at the time, towards a more personal and original style, inspired by nature’s many shapes and forms and loaded with symbolism.

However, the work that best summarizes Gaudí’s symbolic and artistic universe is Sagrada Familia, to which he dedicated 43 years, from 1883 to 1926, which came to a tragic end when he died after being knocked down by a tram. Disparaged after his death by new cultural movements, the architect’s talent has nonetheless won international recognition, simultaneously converting him into the great icon of Barcelona.

Barcelona has always maintained a complex relationship with Montjuïc, passing from dependence to repudiation depending on the different uses it has had over time. Before the arrival of the Romans, the mountain was home to an important Iberian settlement that was most likely the instigator of trade relations with the Greeks and Phoenicians.

With the foundation of Barcino, Montjuïc’s population gradually became smaller and smaller, at the same time as it supplied the stone that was used to erect the walls and houses of the growing Roman colony.

During the Middle Ages, as well as its purpose as a quarry it was also employed as an agricultural space and a Jewish necropolis –the probable reason for its name–, whilst in the seventeenth century it was militarized with the construction of a castle that for diverse periods of social unrest was used to bombard the city and imprison dissidents.

Owing to its repressive use, Barcelonans progressively moved away from Montjuïc, which did not start its restructuring as a place for public participation until 1929, when it housed the infrastructures of the Universal Exposition. Moreover, the hosting of the Olympic Games was key in transforming the mountain, established as an attractive area complete with green zones, cultural facilities and sports amenities.

Tibidabo and the high zone of Barcelona 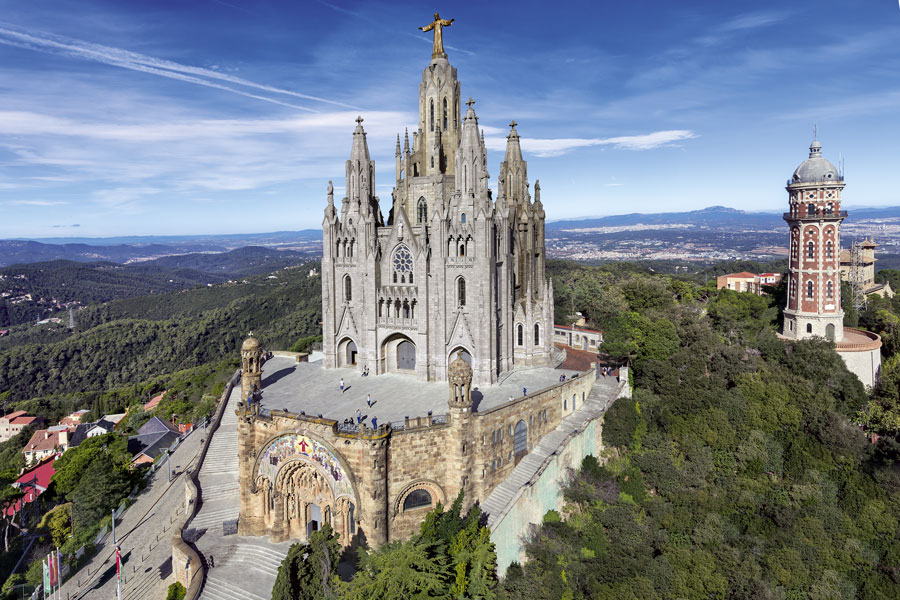 Located between the Besòs and Llobregat Rivers and with the mountain of Tibidabo as reference point, the Collserola mountain range is like a large natural border between Barcelona and part of its extensive metropolitan area, limiting urban growth and being a green “lung”.

The sector of the city that is nearest to this range is referred to by Barcelonans as the zona alta or high zone (the north part of the city), a name that encompasses a heterogeneous arrangement of neighbourhoods, many of which were independent towns up until the start of the 20th century.

Despite having been absorbed by Barcelona, districts such as Les Corts and Sarrià-Sant Gervasi still conserve part of their own character, with an urban profile that reveals their rural past as well as their longstanding condition to appeal to the city’ s upper-class –who, rather like the case of the Eixample, between the nineteenth and twentieth centuries set about developing numerous constructions of modernist style–.

Even though it is largely residential, the high zone also carries out important economic and social functions, given that around the Avinguda Diagonal are the large financial institutions, as well as the main university buildings, whilst the abundant green zones are at the heart of all type of recreational activities.

Thanks to the celebration of the Olympic Games of 1992, Barcelona was able to undertake the most important renovation project since the demolition of its medieval walls and the creation of the Eixample, with far-reaching urban development projects such as the regeneration of the seafront and the construction of new infrastructures for the metropolitan area.

Following this modernisation process, Barcelona was able to reposition itself in the international panorama, establishing itself as a dynamic and attractive metropolis, capable of blending tradition with contemporary creations.

With the objective of maintaining its brand position, the city continues to transform itself since the Olympics, in other words taking full advantage of important international events –like the Universal Forum of Cultures of 2004 , which implied completing the regeneration of the coastline– as well as boosting city development plans such as the 22@ zone, which transformed an obsolete industrial neighbourhood into a technological district.

These changes have not only updated the profile of the city, but have meant that Barcelona, just like during the emergence of Modernism, is connected to the artistic vanguard by means of innovative projects signed by the most prestigious of big-name architects.

A book of all the nooks and crannies of Barcelona

The cradle of outstanding artists, writers, intellectuals and architects, Barcelona is a modern and cosmopolitan city that attracts millions of tourists every year. This book about Barcelona shows the city up close through incredible photographs and a great volume of information on its most emblematic places. Discover everything you need to know about this incredible city.

A large-sized book that explores the city, its history, its architecture and most emblematic places.