The project for the construction of a building for a business and residences in the centre of León was entrusted to Gaudí in 1891 by the textile company Fernández y Andrés, who had a business relationship with Catalan entrepreneur Eusebi Güell, the architect’s patron.

The building is known as “Casa Botines” due to the Castilian version of the second surname of the company’s founder, Catalan Joan Homs i Botinàs. On his death, two of his employees, Simón Fernández and Mariano Andrés, kept the business on and decided to con struct a new headquarters on the site of San Marcelo Square.

At that time, Antoni Gaudí was working on the Episcopal Palace in Astorga, a city which is about 50 kilometres from León, and took up the commission due to the proximity of the two projects. The construction work started in January 1892 and was completed in the record time of ten months.

Commercial and residential use 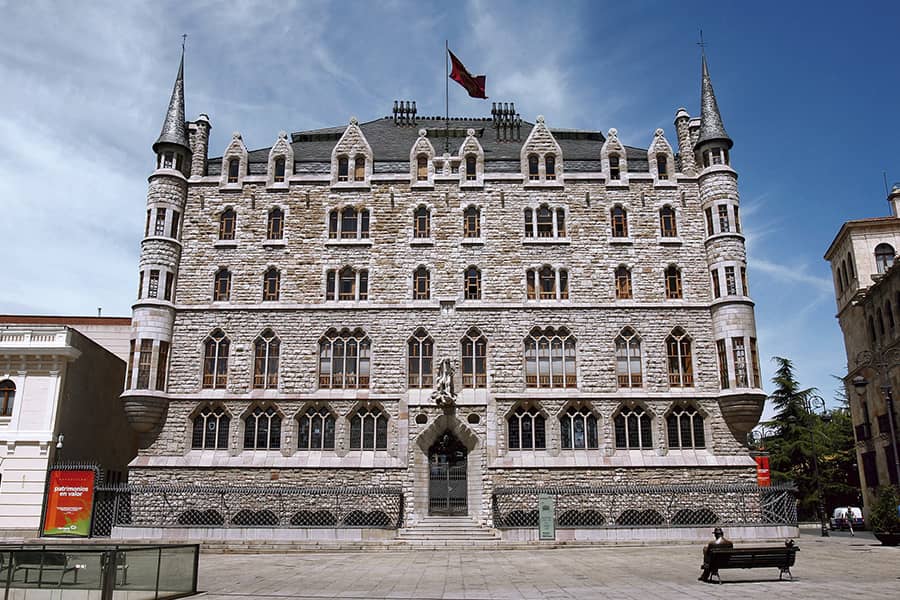 Built on a site of trapezoidal shape and facing the four points of the compass, Casa Botines combined commercial and residential use. The semi-basement and the ground floor were used as offices, shop and warehouses for the business of Fernández and Andrés; the main floor was divided into two residences –one for each owner– and the two upper floors each hold four rented apartments.

To separate public use from private use, Gaudí devised four doorways, one on each façade. The one which looked out on to the square provided access to the shop and offices, the rear one to the warehouse, and the two side ones led through to staircases which the residents used to reach their apartments.

To top the attic, where the porter resided, Gaudí carried through an idea that he wasn’t able to complete in the Episcopal Palace of Astorga: a roof that had four very steep slopes with six skylights that provided insulation, illumination and ventilation by means of glass claraboyas raised a few centimetres off the roof.

In order to blend his project into the architectonic context of León, Gaudí studied the city’s cathedral, convents and basilicas, as well as the Guzmanes Palace adjacent to the Casa Botines site. For this reason and for the stylistic continuity with the neighbouring and contemporary work of the Episcopal Palace of Astorga, the artist opted for the neo-Gothic style, with the use of lobulated arches on doors and windows.

Gaudí softened the rigidity of the polyhedral shape of the building by emphasizing horizontality and chromatically framing the façade with the dark shaded slate on the roof and the railing around the trench. The corner towers and their stylised toppings act as a vertical counterpoint and give the property this magic and heterodox feel that is so typical of Gaudí. 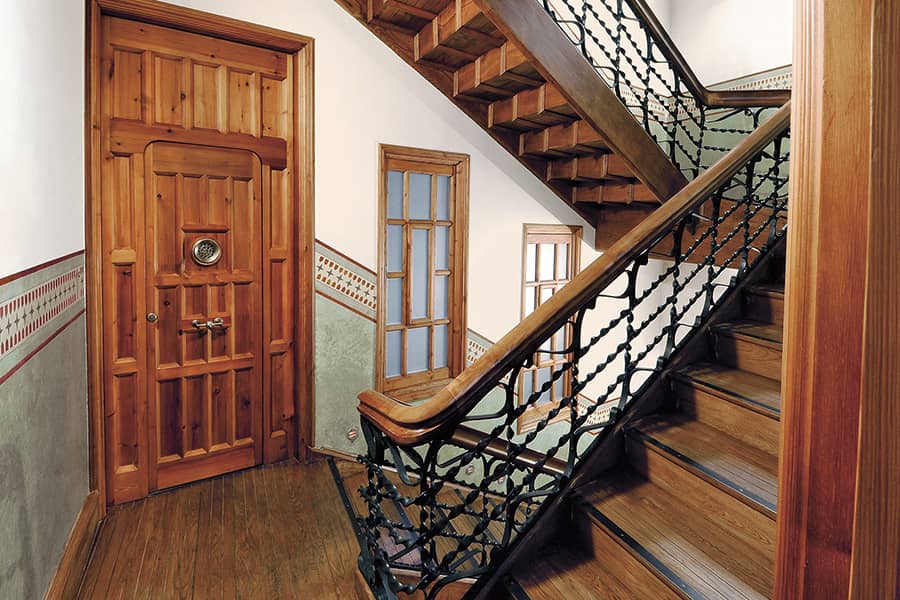 On the floors for commercial use of Casa Botines, Gaudí applied, for the first time, the so-called open plan design, a solution way ahead of the model used massively throughout the 20th century for offices and superstores. The architect dispensed with the usual thick load-bearing walls and substituted them for 28 slender cast iron pillars measuring only 20 cm in diameter.

This structure created a diaphanous feel on the ground floor and basement, allowing a greater flexibility in the distribution of space. With identical rationality, the architect worked on the interior arrangement of the floors dividing the surface area of the building into 96 modules (the long façades into 12 parts and the short ones into eight). The resultant reticular helped him arrange the pillars, line up the walls and determine the shape of the patio wells and the stairwells.

The most complete visual book on Gaudí’s work

Antoni Gaudí was one of the most versatile architects and creators of the 19th century, recognized almost anywhere in the world. His works have a sign and identity of their own.

The book “The Complete Work of Antoni Gaudí” closely explores the works that Antoni Gaudí carried out during his life, from his most emblematic works to his lesser known projects. With more than 750 pictures, 3D recreations and computer graphics.

Published by Dosde, the book provides the reader with a complete tour of the architect’s work, from his famous to lesser known works.