The history of Casa Vicens

In 1878, Manuel Vicens i Montaner, stockbroker and owner of a ceramic factory –according to various sources– commissioned Antoni Gaudí with the project of a detached summer residence on a plot of land on the western edge of the town of Gràcia, which was then an independent municipality only a kilometre and a half away from Barcelona: the Casa Vicens. At that time, many middle class families chose Gràcia as a place of retreat because it combined close proximity to the capital and offered the tranquillity of a small town.

Gaudí, who graduated the very same year, planned a construction of simple structure, though its complex volumes and multicoloured decoration –with the tilework playing an important role– anticipated, in an intuitive way, the structural and decorative postulates that would give rise to Catalan Modernism. Although Gaudí completed its design in 1880, building work did not start until 1883 and was not completed until the year 1888 due to the economic difficulties of Mr. Vicens.

In 1925, Antoni Jover Puig, the house’s owner from 1899, wanted Gaudí to carry out an extension plan in order to convert the property into the first residence of the Jover family. The artist, who was working on Sagrada Familia, turned down the offer and recommended his colleague Joan Baptista Serra de Martínez, who would design an extension that was in perfect consonance with Gaudí’s original work.

An eclectic and colourful project

Aesthetically, the artist surprises with an eclectic use of resources from different periods and origins and by the imaginative combination of traditional materials and decorative art, a common feature of the modernist movement, already apparent in this work. The preference for colourful tilework and geometry remind of Moorish architecture. Moreover, the abundance of naturalist motifs have their roots in Oriental art. 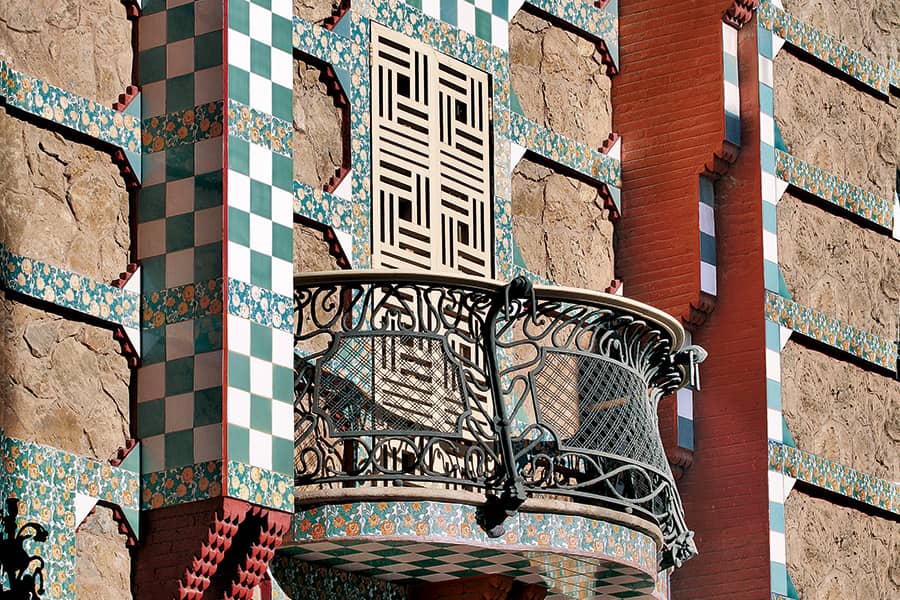 Gaudí devised Casa Vicens as a mix of different styles and materials, in line with one of the trends that was dominant in the latter part of the nineteenth century, generically known as Eclecticism, which advocated the rupture with the academism that prevailed up to that time and the recuperation of European medieval styles and other more exotic artistic forms, such as Oriental and Muslim art.

For the Casa Vicens project, Gaudí turned to Moorish and Mudejar influences –two styles deeply rooted in medieval Spanish culture– and incorporates them on the main façade by means of the combination of four very different materials: stone used as a base for the walls, tilework as a chromatic element, wood for the window shutters and wrought iron work for the manufacture of the property’s many fences and railings.

The book to discover Gaudí’s work

Antoni Gaudí was one of the most important architects in history. He created an artistic language inspired by nature’s very own shapes.

This book, with more than 180 photographs, explores all the works carried out by the architect throughout his life. It shows the reader the complex and innovative conceptions devised by Gaudí.

Published by Dosde, the book is packed with information and interesting facts for the reader to enjoy the works of the great architect and to explore his symbology.