Gaudí and the Mallorca cathedral

Towards the end of the 19th century, Bishop Pere Campins was behind the refurbishment of the internal layout and the decoration of the Mallorca cathedral, which had been built between the 13th and 14th centuries. Disappointed by proposals from diocesan architects, in 1899 Campins travelled to Barcelona to ask for Gaudí’s advice.

The ideas of the author of the Sagrada Familia, who at that time got on well with several ecclesiastics of great intellectual stature, greatly enthused the bishop, who immediately proposed Gaudí with personally taking charge of the restoration. Spurred on by the idea of leaving his mark on the medieval cathedral, Gaudí accepted the offer, planning a refurbishment that, despite being unfinished, had the strong character of its creator, while integrating perfectly into the Gothic substrate.

In 1903, Gaudí presented a substantial restoration project of the Mallorca cathedral to Bishop Campins. Amongst the work he undertook, the changes causing the most impact on the cathedral’s configuration was the dismantling of two altarpieces that had blocked the congregation’s vision of the bishop’s throne, the location of the high altar in front of the mentioned throne, the positioning of a baldachino over the altar, the moving of the choir stand from the central nave to the presbytery, the restoration of two pulpits –only one of which now remains–, the recuperation of bricked up windows, the design of nine stained glass windows and diverse furniture, new lighting and ornamental wrought iron work, ceramic and paintings.

In 1914, Gaudí left the project of the Mallorca cathedral unfinished due to quarrels with the contractor and the death of the Bishop, his great ally.

A space for prayer 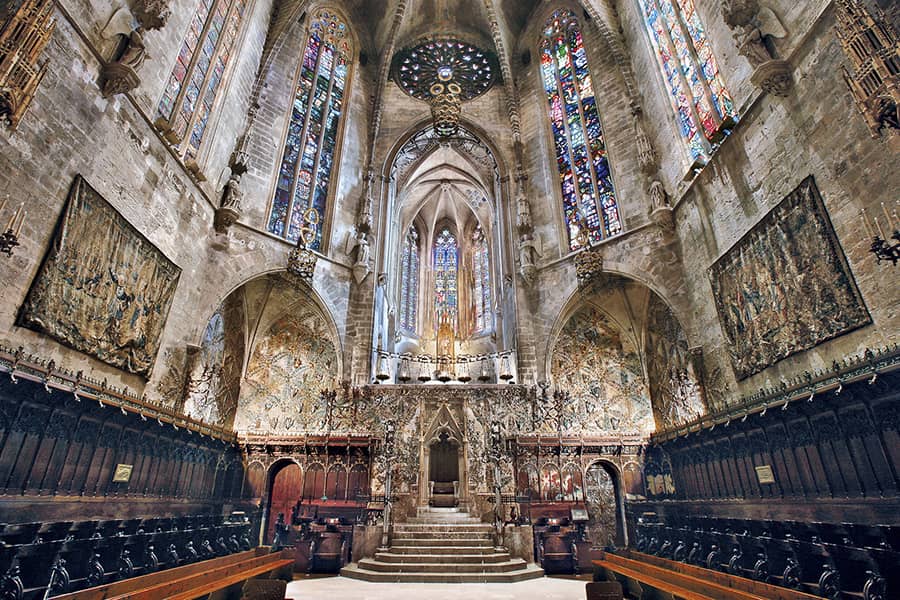 Faithful to his way of viewing art, Gaudí imagined a cathedral full of light, colour and delicate decorative details that would help create the ideal atmosphere for prayer. In order to increase natural light, the architect opened the unfinished windows that were filled in, and planned nine stained glass windows with phrases from the litanies of the Virgin.

In order to achieve artificial light, he designed dozens of candelabras and wrought iron lamps such as those that cling to the shafts of all of the columns in the temple. The Mallorcan blacksmiths also forged the gate of the presbytery and made delicate golden insertions of ritual phrases on the bishop throne’s wall, while Josep Maria Jujol, who worked alongside Gaudí, painted some of the choir pews vibrant colours, though the result was not appreciated by the priests, who put a halt to this change.

The baldachino and the high altar of the Mallorca cathedral

Gaudí took upon dignifying the altar with the collocation of a baldachino, an enormous heptagonal crown on whose vertex the architect put a sculptural arrangement with Jesus Christ on the cross and the Virgin and Saint John at his feet.

From the crown hang 35 brass lamps that light up the altar, while over it Gaudí hangs a brocade tapestry of eucharist theme that obliquely projects over Christ’s followers. The present baldachino is actually a provisional same-sized model, made from ephemeral material, such as card, paper, wire and wood. The final structure never got to be made.

The deluxe format of this edition means Antoni Gaudi’s works can be seen at their best thanks to 3D illustrations, excellent photographs and drawings. One of our best books about Gaudí.

Published by Dosde, the work contains detailed information and fascinating facts about the work of the ingenius architect. The reader will discover his use of symbology, his influences and elements of inspiration.