You must have heard of Antoni Gaudí’s most popular works: But do you know of his lesser known ones? In this article we will tell you about the projects by Gaudí that are lesser known but still nonetheless show all the familiar traits of the architect. 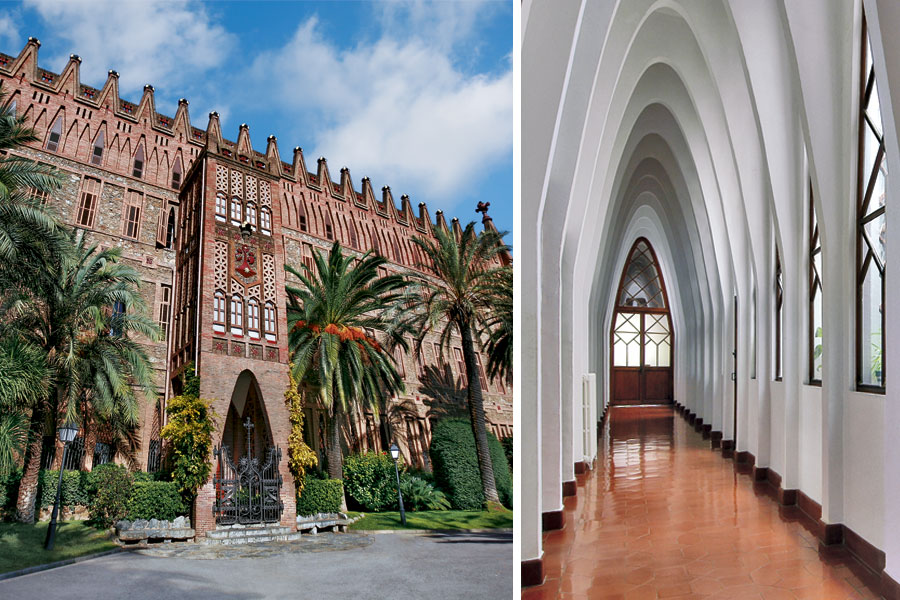 The Teresian college is Gaudí’s most austere project, but the low budget did not stop the architect from creating a work marked by symbolism and the use of the parabolic archway.

In 1889, Enric d’Ossó, founder of the Teresian Congregation, commissioned Gaudí to continue the project of a large building in Sant Gervasi de Cassoles, in order to accommodate a female boarding college, the headquarters of the congregation and a study house for the nuns.

The former architect left Gaudí with the foundations and about 80 centimetres of wall built, and the latter accepted Ossó’s conditions: a tight budget in line with the congregation’s vow of poverty which was contrary to the opulence of the projects commissioned by Eusebi Güell, his patron.

Despite the financial constraints of the project, the artist does not abandon his imaginative constructive ideas and with brick manages to design ornamental elements of great visual wealth. Gaudí concluded the work in just over a year. 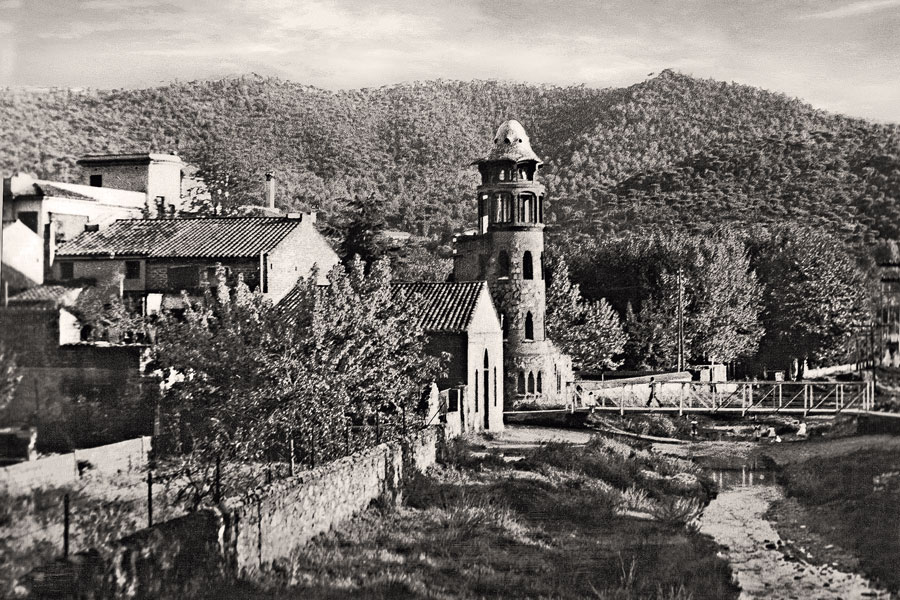 In the year 1906, Antoni Gaudí and his colleague Francesc Berenguer planned this summer residence for automobile businessman Damià Mateu in the town Llinars del Vallès, near to Barcelona.

Gaudí and Berenguer designed a small property with a one hundred square metre ground plan whose most striking element was the look-out tower that had a cylindrical shape and five floors, topped with a cupola covered with decorative trencadís work. Gaudí combined masonry and brickwork, with a façade whose shape reminds of Casa Vicens.

A bomb that exploded in 1939 on a bridge close to the property left all the surrounding buildings in ruins, except for the watch tower that was designed by Antoni Gaudí and Francesc Berenguer. After its demolition in 1962, a local association is now planning its reconstruction. 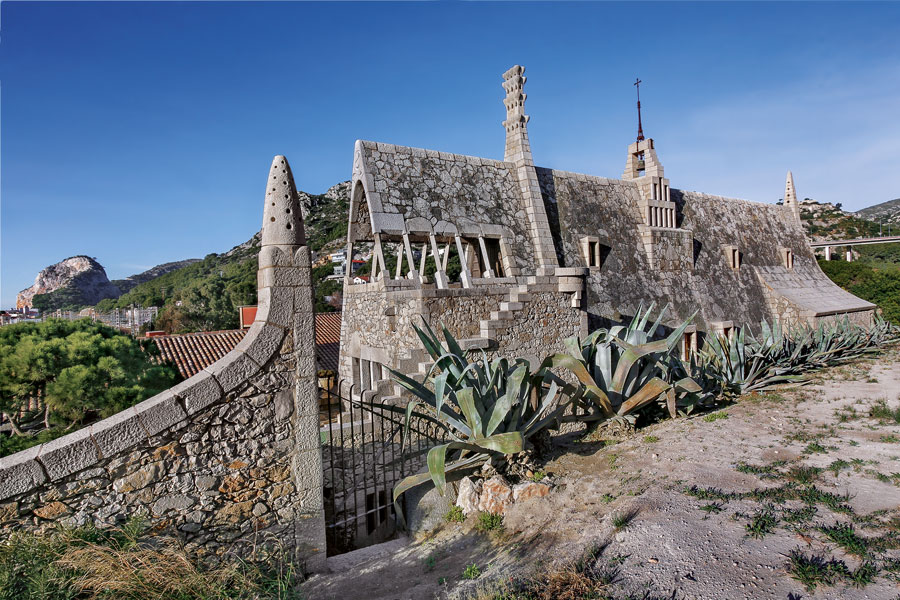 In 1895 the industrialist Eusebi Güell commissioned Gaudí with the construction of some winecellars in a property in Garraf, a coastal area to the south of Barcelona. With the help of his colleague Francesc Berenguer, the architect designs a very original building, with a triangular shape and covered with a sharply sloping two-sided roof, similar to a tent.

This angular appearance and the use of stone from the adjoining quarry allow the property to blend into the rocky landscape, perfectly in tune with the arid location, just 200 metres from the beach and at the foot of the massif.

The building, with two basements and three floors, was equipped with cellars, a coach house, two residences and a curious chapel on the upper floor. Contrary to other projects, Antoni Gaudí used just one cladding material for the entire building: grey limestone from Garraf. 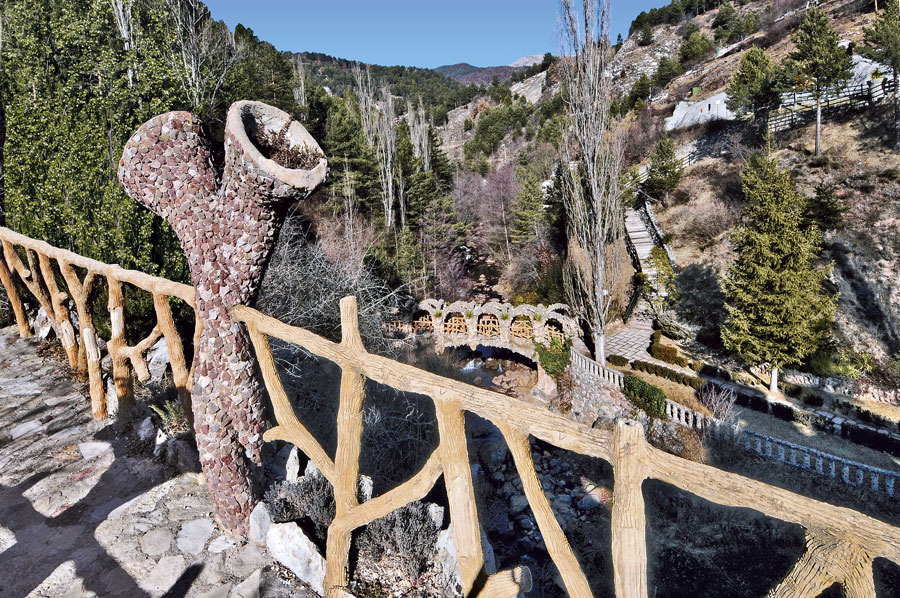 Gaudí was inspired by Park Güell when landscaping a leafy zone in the Pre-Pyrenees on the Llobregat’s banks. The project was commissioned by textile industrialist Joan Artigas Alart, who was captivated by Park Güell in Barcelona, which was at the time being constructed.

Gaudí conceived the commission to landscape industrialist Joan Artigas’ property in La Pobla de Lillet as a stroll along the banks of the River Llobregat, with several fountains and look-out points on the way. Gaudí focused practically all of his interventions around the springs and the points that allowed close-up enjoyment of the water spectacle that rushed rapidly down through the gardens.

Loyal to his great source of inspiration, nature, Gaudí erects the elements of the garden using materials from the same zone or by imitating the forms of the local vegetation with other materials, such as cement.

The Artigas Gardens take up a surface area of 40,000 square metres, the approximate equivalent of four football pitches. After five decades of deterioration, in 1992 refurbishment work on this park designed by Gaudí was started. 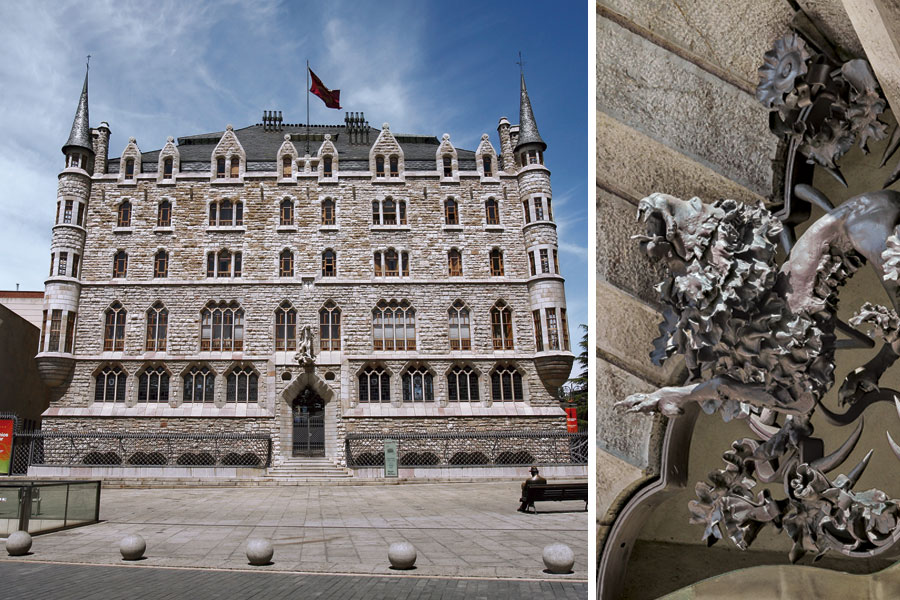 The neo-Gothic appearance of this Leonese building boasts constructive solutions ahead of its time. The project for the construction of a building for business and residences in the centre of León was entrusted to Gaudí in 1891 by the textile company Fernández y Andrés, who had a business relationship with Eusebi Güell, the architect’s patron.

The construction work started in January 1892 and was completed in the record time of ten months. The Catalan architect, aged 39, devised a neo-Gothic façade and dotted the building with symbolism – very common in all his work–, but reserved the most daring features for the inside of the property: instead of supporting the building with heavy load-bearing walls, Gaudí designed a light but solid structure using cast iron pillars.

Built on a site of trapezoidal shape and facing the four points of the compass, Casa Botines combined commercial and residential use. The semi-basement and the ground floor were used as offices, shop and warehouses for the business of Fernández and Andrés; the main floor was divided into two residences and the two upper floors each hold four rented apartments.

As in many of the works of his first period, Antoni Gaudí was inspired by the Gothic style when designing the façade of Casa Botines, which he gave a medieval atmosphere to right in the heart of the City of León.

All Gaudí’s works in one great book

With more than 750 pictures, 3D recreations and computer graphics, this visual guide covers the complete work of Antoni Gaudí from his most emblematic works to his lesser known projects. It shows all the architect’s works in detail, analyzing them section by section. An absolute essential to know everything about Gaudí.