At the turn of the late nineteenth and early twentieth century, coinciding with an era of technological progress and economic development, various parts of Europe witnessed the simultaneous appearance of a new artistic movement that sought to break with the past by focusing on greater creative freedom.

This trend, the antithesis of academic Historicism that had prevailed until then, wanted to abolish the hierarchies that had traditionally been dominant in the arts and to vindicate the importance of craftsmanship and shapes created by nature itself. This new genre received various denominations according to the location in which it was developing, such as Art Nouveau in Belgium and France, Modern Style in Great Britain, Sezessionstil in Austria, Jugendstil in Germany and Stile Liberty in Italy.

In Catalonia, the most cosmopolitan and prosperous region in Spain, the movement was baptised as Modernisme and its main focus of dissemination was in Barcelona, a city that was expanding and flourishing in all sectors thanks to the far-reaching effects of the Industrial Revolution. Equipped with its own personality, Modernisme reached its maximum splendour thanks to Catalonia’s rising bourgeoisie, who considered it the ideal medium to express their political and social aspirations.

This unconditional support from the affluent meant dozens of architects, painters, sculptors and craftsmen were fortunate enough to be able to give free rein to their imagination and carry out the most singular and spectacular works that, in addition to transforming the aesthetics of public and private spaces, became real icons of an era marked by the incessant desire for renewal, modernity and beauty.

The emergence of a new style 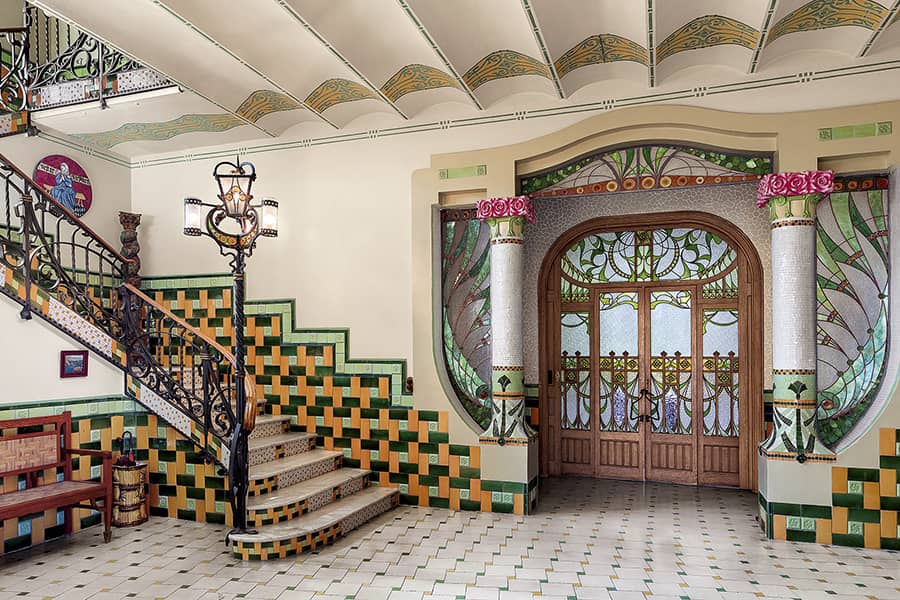 The term “Modernisme” was first used in the late nineteenth century to refer to a diverse group of artists and intellectuals who sought to go beyond the Renaixença, by equipping Catalonia with a national and modern culture, comparable to that of the most advanced countries.

Partly inspired by the English Arts and Crafts movement, which underlined the importance of craftsmanship, Modernisme had a lot in common with the diverse versions of Art Nouveau emerging in the main European cities during the same period, such as the desire for creative freedom, admiration for nature’s forms and the taste for ornamental detail.

Driven by its anxiety for renewal, the Modernisme movement managed to involve many different disciplines, such as literature, music, painting, sculpture and, above all, architecture, the creative sphere where Modernisme reached its full development, which is demonstrated by works such as Casa Batlló, La Pedrera, the Palau de la Música Catalana, Casa Amatller and Hospital de Sant Pau. All of these constructions are now considered icons of Catalan modernist architecture. 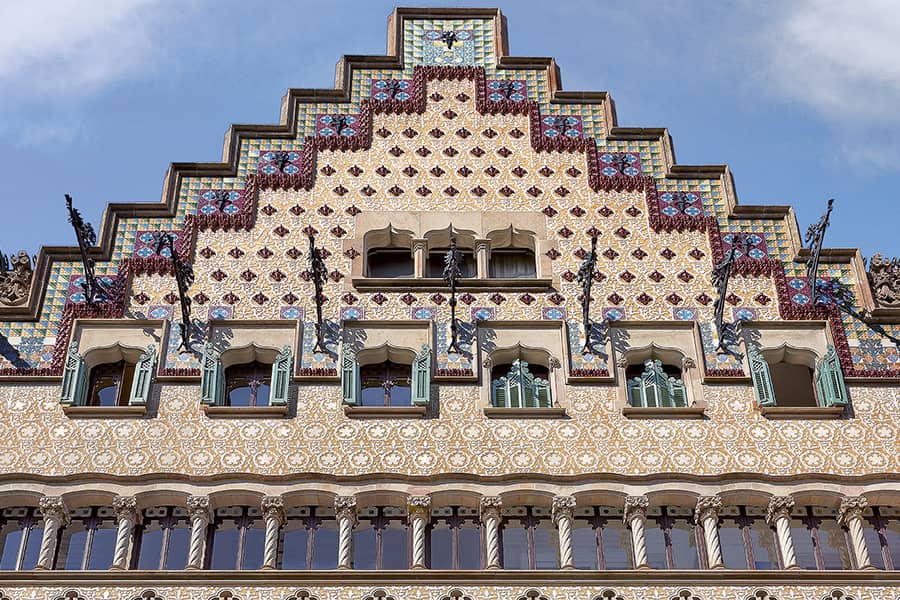 Associated with the idea of renewal and progress, Modernisme reached its peak in Barcelona, a city that was constantly expanding from the mid-nineteenth century. In 1854 the municipal authorities approved the demolition of the medieval walls that had hitherto prevented the expansion of the city.

This decision led to the creation of the Eixample, a vast network of streets, perpendicular and parallel to the sea, designed by engineer Ildefons Cerdà in order to alleviate the serious public health problems that resulted from the city’s overcrowding while uniting in an orderly fashion the old town of Barcelona with its surrounding municipalities.

The new urban layout, whose central axis was found at Passeig de Gràcia, the avenue where the most influential families of the city were settling, offered a unique opportunity to architects, who were entrusted by the industrial bourgeoisie with the creation of a wide variety of residential buildings and facilities.

The great urban transformation experienced by Barcelona in the late nineteenth century and early twentieth century was made possible by an extensive list of talented architects, the most notable including Antoni Gaudí, Josep Puig i Cadafalch, Lluís Domènech i Montaner and Enric Sagnier, considered the main figures of Catalan Modernism. Equipped with in-depth theoretical and technical knowledge, these professionals initially borrowed from Historicism and Eclecticism, but gradually evolved towards a much more original and freer style.

Identified with the aesthetic postulates of Modernisme, their works were able to reflect the economic splendour of the new bourgeoisie, while at the same time enrich the architectural heritage of Barcelona, positioning the Catalan city in the European artistic vanguard.

Between the past and the future

Admirers of the Middle Ages, an era identified with the economic and cultural splendour of Catalonia, modernist architects were distinguished for incorporating typical gothic style elements into their new projects.

Present on both an ornamental and structural level, these allusions to the past were combined with the use of materials belonging to the industrial era.

Thus, the protagonists of Catalonia’s Modernisme transcended the mere reformulation of medieval language to give shape to a completely new style of architecture, which showed similarities with different variations of Art Nouveau that were arising in major European cities, characterised by the taste for curvilinear forms and decorative details of allegorical character.

Modernisme aspired to provide aesthetic value to all objects that were typical of daily life. The movement gave great prominence to craftsmen, who skilfully combined traditional artisanal techniques with the latest technological innovations in order to exploit the plastic potential of woodwork, ceramic work, iron and glass work, amongst other materials.

Descendents of families who had worked in the same workshops for generations, these specialists in the field of arts and crafts often worked closely with the modernist architects. Through this interaction, decorative items and furnishings were perfectly integrated into the spaces for which they were intended, creating a fascinating and harmonious universe of textures, shapes and colours.

The book to discover the world of Modernisme

It left an indelible mark, as much on the world of architecture as on the art scene or artisanal work. Catalan Modernism was a unique artistic movement that sought to transfer beauty to all aspects of everyday life. Its use of feminine forms, symbolic language, appreciation for the handicrafts…
Enter the amazing world of Modernisme with this book. More than 300 stunning photographs that show in total detail the most creative modernist works of this movement.