Declared a World Heritage Site by Unesco, Seville Cathedral is one of the most admired architectonic ensembles in the world. Its importance is reflected by both its enormous size and its priceless artistic treasures, testimony of the temple’s long drawn out history.

The origins of the cathedral

In 1147, Seville, which had been under Muslim rule for more than four centuries, passed into the hands of the Almohad dynasty, originally from North Africa, which sparked off the beginning of a golden age for the city, particularly in the field of architecture.

One of the most ambitious projects undertaken at the time was the construction of a great mosque on a site close to the walls of the Alcazar, the fortress in which the Muslim governors resided. Inaugurated in the late twelfth century, the mosque was one of the most impressive of its kind in the Iberian Peninsula, with dimensions that demonstrated how important Seville had become under Almohad rule

When troops from the kingdom of Castile conquered the city in the year 1248, the mosque managed to save itself from destruction due to the decision of the Christian authorities to transform it into the cathedral of the archdiocese of Seville. Subject to slight modifications, such as the addition of a royal chapel, the building easily adapted to its new function, but eventually fell into disrepair.

Therefore in the early fifteenth century it was decided that it should be replaced by a new gothic style cathedral which, once completed, would end up converting into the main symbol of the religious, artistic and economic development achieved by Seville. 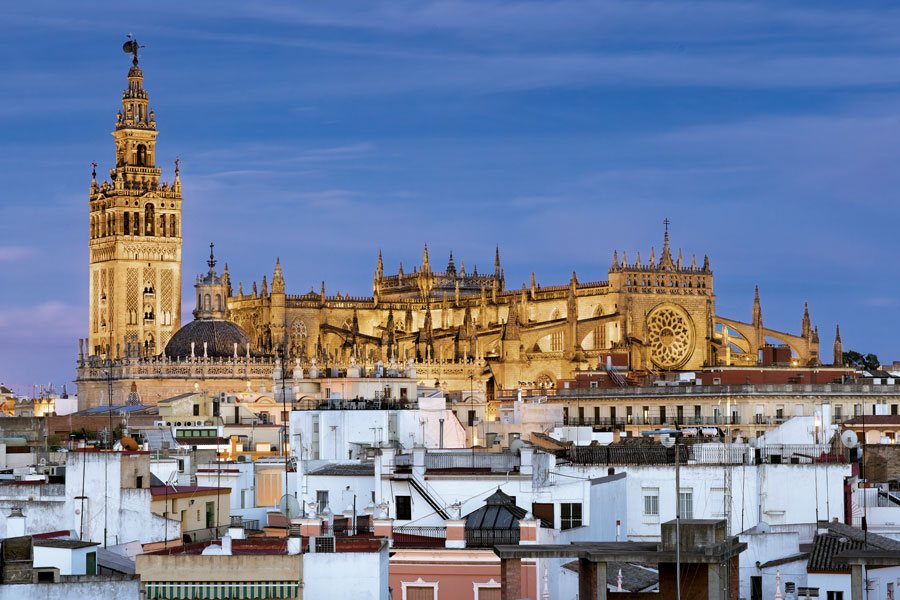 The styles of Seville Cathedral

The cathedral complex responds to the idea of monumentality, as was customary for gothic buildings. The new cathedral was to exceed all expectations, as it would end up becoming the largest Gothic church to be erected in the world, a landmark achievement in the history of architecture that would be reflected by the nickname by which the temple would be known: the Magna Hispalensis, or in other words, “the Great One of Seville”

Seville Cathedral has an unusual structure for gothic architecture. the decision to take advantage of the former mosque, led to a temple with a rectangular layout that lacked the typical chevet with ambulatory typical of most gothic cathedrals.

In the 16th century, the cathedral’s original layout, which included the Gothic temple and diverse vestiges of the Almohad period, such as the Orange Tree Courtyard and the Giralda Tower, incorporated a series of Renaissance style rooms, such as the royal chapel, the chapter rooms and the sacristies. The site underwent even more changes in the 17th century with the creation of the baroque style Tabernacle Church; while between the 18th and 20th centuries the neoclassical pavilion was erected, which is now home to the offices and museum. 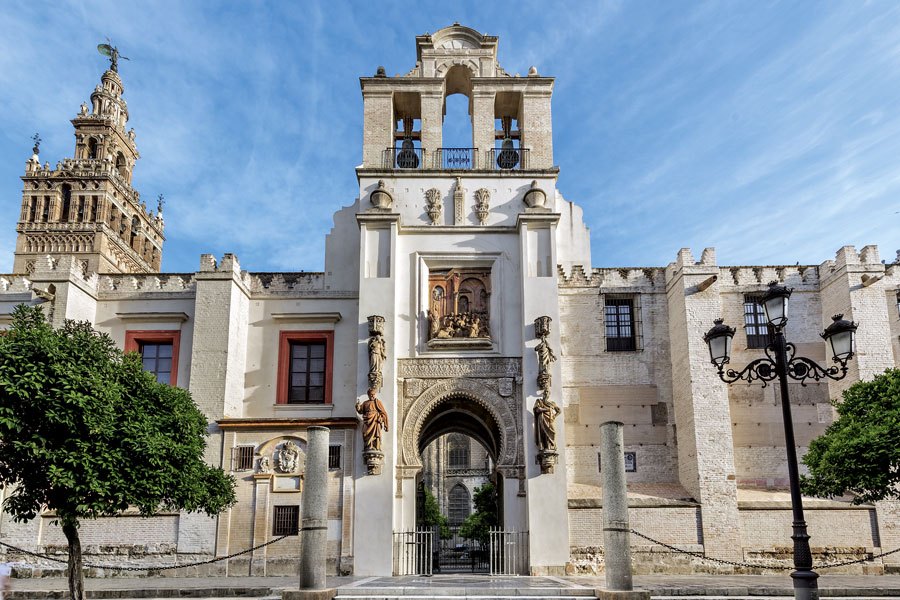 Converted into the main symbol of Seville, the belltower on the northeast corner of the cathedral was the Almohad mosque’s minaret, which was renovated in the Christian era.

La Giralda started to be built in 1184 under the management of architect Ahmed Ben Basso, who only got to construct an ashlar base, and it was completed fourteen years later by Ali de Gomara, who decided to continue the work employing solid brickwork. The tower then reached 82 metres high (measurements that would convert it into the highest building in Europe) and it was crowned by a dome clad in tilework and four golden spheres

In 1356, an earthquake caused the collapse of this decorative termination, and in its place a simple belltower was built. With its austere design, this structure somewhat reduced the tower’s visual impact, so in 1558 the Chapter decided to replace it with a more monumental Renaissance style project, which managed to reinforce the stylized profile of the Giralda while harmoniously integrating the Muslim architecture with that of the Christian style. 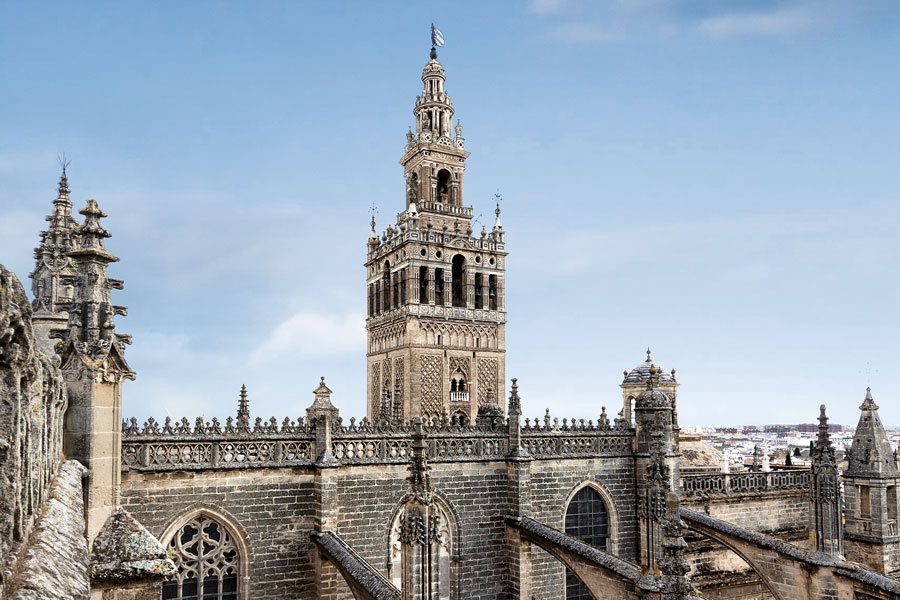 As the centre of the religious, economic and social activity of Seville, the city’s cathedral interacted with its external environment by means of  the different entrances on its four façades.

The oldest portal on the cathedral site is that of the Forgiveness, which is located on the north façade and corresponds to the old main entrance of the pre-existing Almohad mosque, as evidenced by its appearance, modified in the 16th century. The Baptism and Saint Michael doors, on the western façade, are gothic works from the 15th century, while the Bell and Sticks doors, located in the chevet, were finished in the 16th century

As for the two doors of the transept –the Prince one, on the south side, and the Conception one, on the north side– they were completed in the late 19th century and the early 20th century, just like the central entrance on the western side, known as the Assumption Door, which is only opened on special occasions, such as at the start of jubilee years or to receive archbishops.

Despite its importance, the entrance remained unfinished until 1831, when it was completed in neo-gothic style. Its sculptural decoration was carried out more than half a century later by Ricardo Bellver, during restoration work that lasted until 1898. 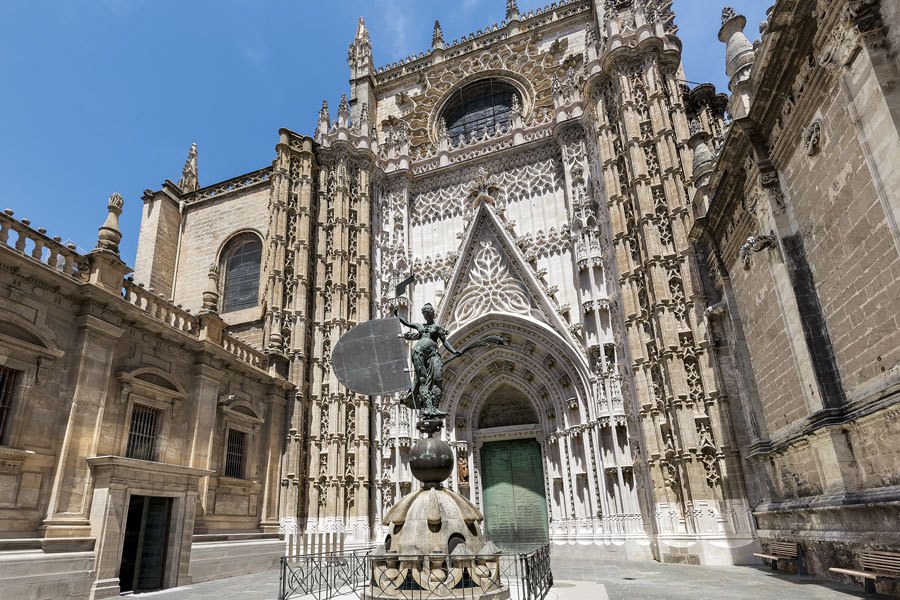 The interior of Seville cathedral

The imposing exterior of Seville Cathedral is echoed by its interior, devised as a majestic rectangular hall. The organisation of the holy site was conditioned by the structure of the Almohad mosque.

The Chapter wanted the new gothic temple to take up the entire perimeter of the building of Muslim origin, in such a way that a formula had to be devised to encase all the elements associated with cathedral activity in the large space provided. The solution therefore was to divide the rectangular floor of the old mosque into five longitudinal naves of nine sections, to which were added rows of chapels on the sides.

This distribution –unusual in medieval cathedrals of the Iberian Peninsula, where the typology of a Latin cross ground plan with three naves prevailed– generated a unitary and compact environment, in accordance with the concept of the temple as a representation of heavenly paradise, while at the same time guaranteeing the correct development of liturgical rites.

The balance of gothic architecture and the abundance of decorative elements provide a solemn appearance to the inside of the cathedral, whose layout adheres to a detailed and precise symbolic scheme.

The high chapel, which is home to the largest altarpiece in the Christian world, and the choir, made up of 117 seats carved from wood between the 15th and 16th centuries, constitute the symbolic epicentre of Seville Cathedral. 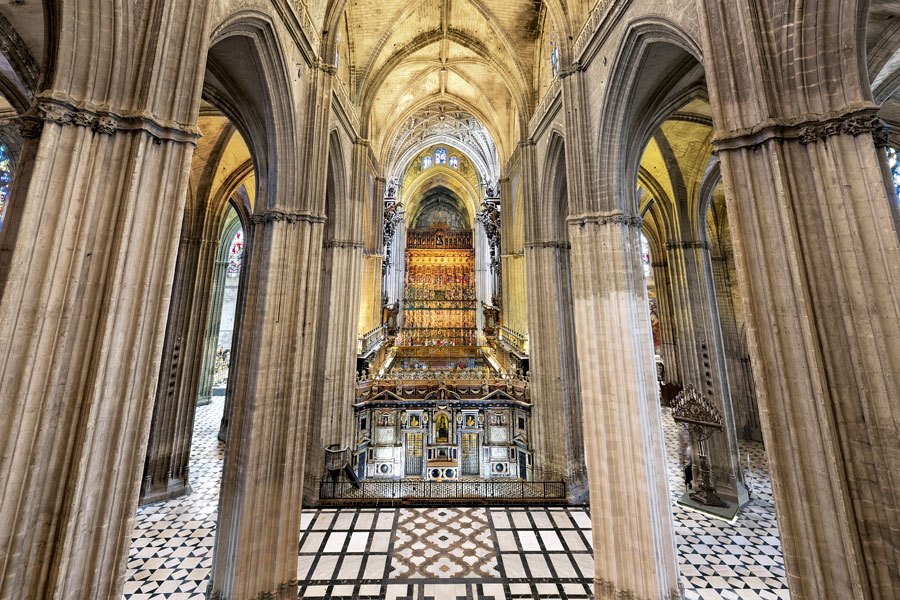 The book on the Seville cathedral, discover it for yourself

This book on Seville Cathedral provides an indepth look at the different parts of the temple,  delves into the temple’s nooks and crannies, allowing a greater understanding of its history and architecture. Its pages include numerous photographs, exclusive 3D illustrations, thorough information and fascinating facts.

To enjoy a complete visual tour, this book published by Dosde has a compact and easy-to-use format, and completes the collection of books on Seville produced by the publishing house. 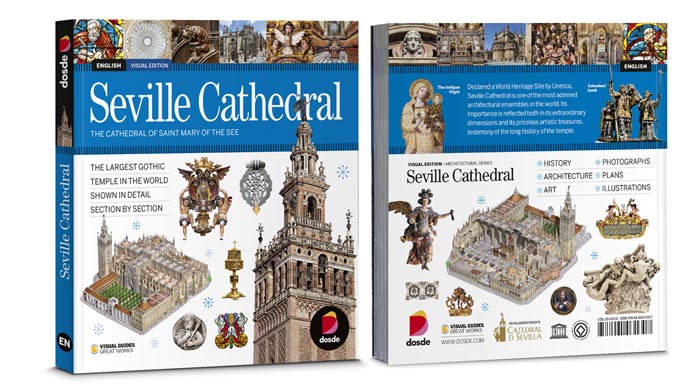