What is Gaudí’s Caprice?

The Caprice of Comillas is the name that the Villa Quijano is most well known by, a house constructed between 1883 and 1885 by architect Antoni Gaudí in the locality of Comillas, in the north of Spain. He was one of the most important architects of modernisme.

Commissioned by Máximo Díaz de Quijano, a lawyer who made his fortune in America, this original work by Gaudí was influenced by Oriental art and Arab architecture, and it anticipates some of the construction and decorative solutions that the Catalan architect would employ in years to come.

The history of Gaudí’s Caprice 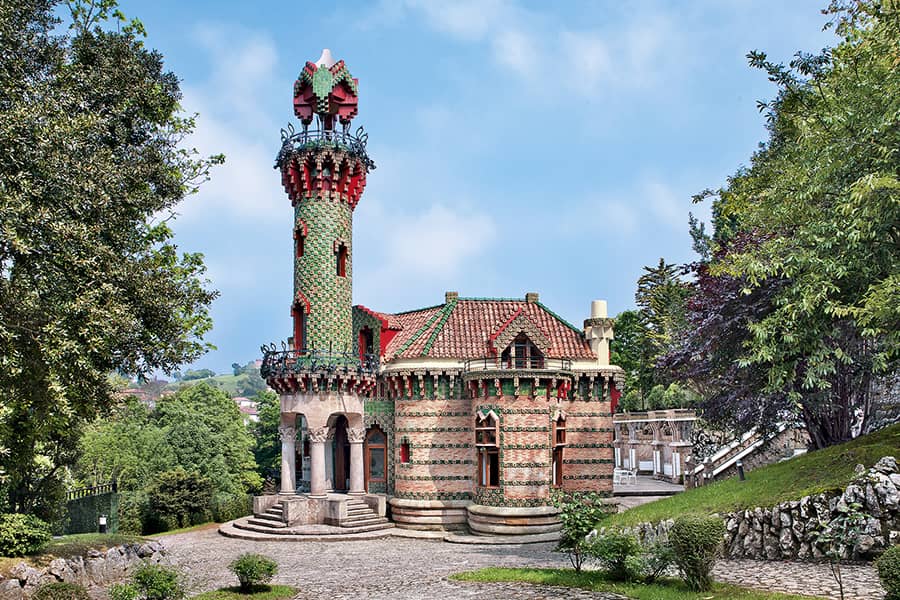 More commonly known as El Capricho or The Caprice, Villa Quijano is one of the most emblematic buildings in Comillas, a Cantabrian coastal resort fifty kilometres to the west of Santander. In the 19th century Comilla’s most illustrious figure was Antonio López y López (1817-1883), an entrepreneur that emigrated to Cuba at the age of fourteen and who, on his return, founded a shipping company, a bank and a tobacco company, activities that made him one of Spain’s wealthiest businessmen and earned him the title of Marquis of Comillas, an honour created expressly for him by King Alfonso XII.

Despite living in Barcelona, Antonio López held Comillas so dear to his heart that he was behind the construction of several monumental buildings in the town such as the Pontifical University and the Sobrellano Palace (designed by Catalan historicist architect Joan Martorell), and the Seminario Mayor (work of distinguished Catalan designer Lluís Domènech i Montaner), transforming Comillas into a popular and chic destination for the aristocracy.

In 1883, Máximo Díaz de Quijano, the Marquis’ wife’s brother-in-law, who had also made his fortune in Cuba, decided to build a summer home in the gardens adjoining the Sobrellano Palace, enthused by this atmosphere of change in Comillas which was partly due to the Spanish royal family spending their summer holidays there.

In order to carry out the project he was recommended the young Antoni Gaudí, Martorell’s disciple and protégé of businessman Eusebi Güell, Antoni López’s son-in-law. However, the architect and the property developer never met as Gaudí actually worked on the villa’s design from Barcelona, leaving the supervision of the work to his colleague Cristóbal Cascante.

The public side of the house 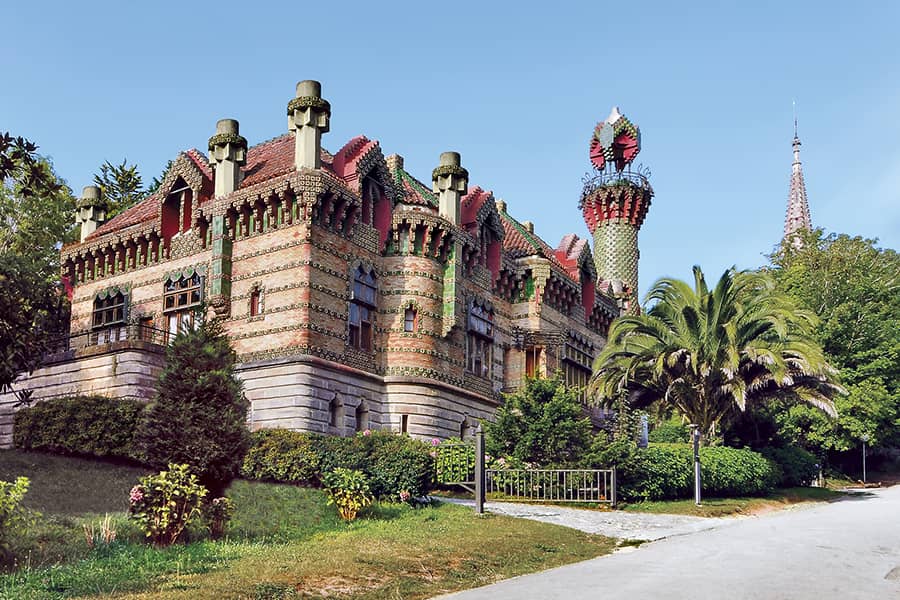 Comillas’ new summer residences were constructed with the additional purpose to show off their owners’ wealth and social standing. The Caprice is a clear example of this, with a lively and original look.

The north façade, which is parallel to the walkway that leads to Sobrellano Palace, holds the main entrance (which stems from a columned portico that supports the look-out tower or belvedere) and the public areas of the house: the visitors’ room, the living room and the dining room.

Despite the fact that Díaz de Quijano claimed he wanted a “small, but comfortable house”, it is evident that the organization and, above all, the decoration of the main façade was designed to impress those who visited Villa Quijano.

The private side of the house 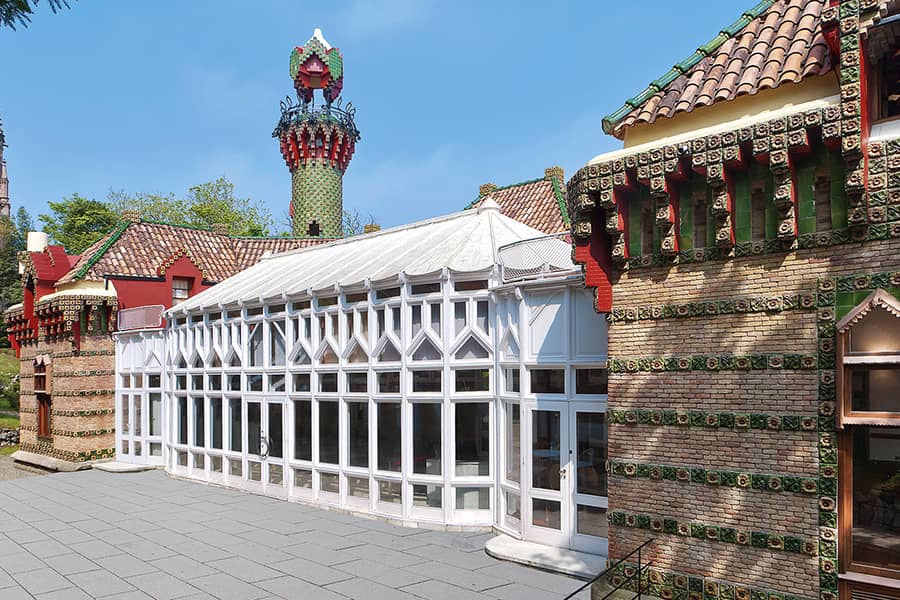 In his general plan for the construction of the Caprice, Antoni Gaudí decided the south-facing façade would be more appropriate for the developer’s private activities and therefore incorporated rooms in this wing such as the master bedroom, the game room-guest room and the greenhouse, which takes up a large part of the mentioned façade.

Struck by the midday sun and sheltered from the cold, damp, north-winds thanks to the uneven land and the structural barrier created by the house, the greenhouse was rather like a kind of thermal regulator for the rest of the rooms as in the evening it would release all the heat it had accumulated during the sunny hours. Likewise, the Caprice’s greenhouse adapted to the ‘U’ shape of the property, leaving a wide roofed corridor that carried out the function of the main hallway of the house.

The distribution of the rooms of the Caprice

Despite some decisions that indicate the genius of its creator, such as the distribution of the rooms around the greenhouse, the Villa Quijano has nonetheless quite a traditional organisation, based on the juxtaposition of rooms coming off a corridor and far removed from the innovative solutions that would characterize Gaudí’s later works.

The Caprice is comprised of three floors, each one of them with different functions: the semi-basement and the attic were dedicated to the service areas where the servants carried out their numerous tasks, whilst the main floor, where the developer would reside, was found at an intermediate level, a location that led Gaudí to devise a system that would reduce transit between floors, with two discreet stairwells that were almost hidden away and which were surprisingly narrow for such an aristocratic residence.

The book for a complete tour around the Caprice

The Caprice was one of the Gaudí’s first works, a display of his boundless imagination. Located in Comillas, on the north Spanish coast, this unique building was designed influenced by Oriental and Arabian art, styles that marked Gaudí’s early period.

This book with more than 180 photographs and 3D illustrations, show in detail this unique building. It covers the structure of the Caprice as well as the original decorative details of its rooms.

Dosde has wanted to delve into this key work in Gaudí’s curriculum, given that many of its architectonic solutions would be applied in later projects. 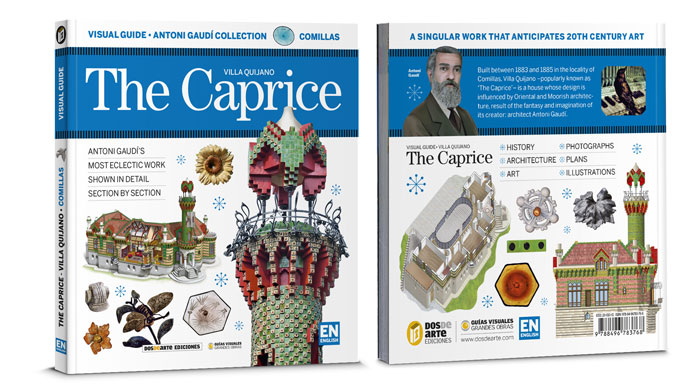