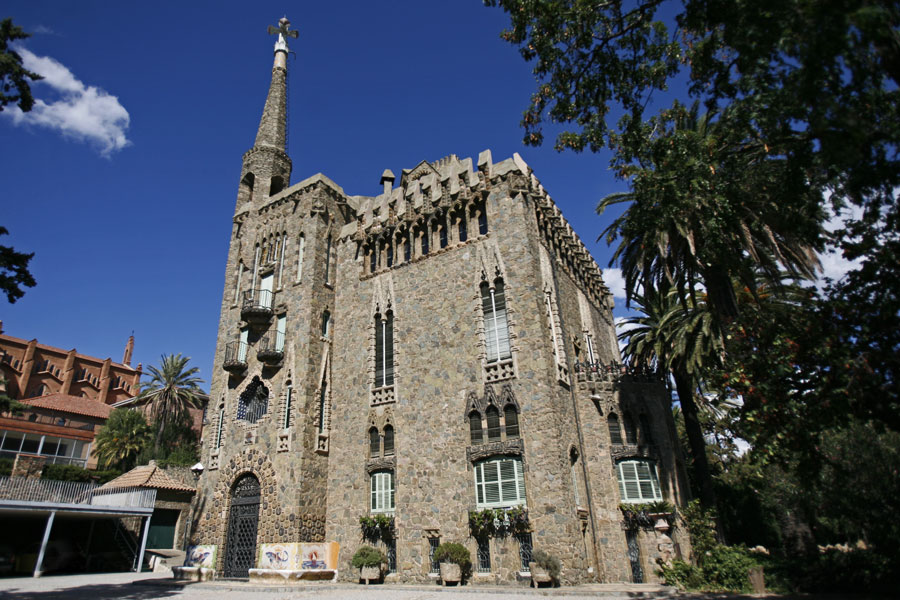 History of the Torre Bellesguard

Joan Grau i Vallespinós, the Bishop that commissioned Gaudí with the Episcopal Palace of Astorga, set down in his will that, on his death, his properties be sold and the money used to found a college.

Gaudí, a good friend of the Bishop, knew that one of the properties for sale, located in the peaceful Barcelona neighbourhood of Sant Gervasi, sheltered the ruins of a palace built in 1408 for Martín I the Benevolent, the last King of the Crown of Aragon belonging to the Barcelona dynasty. This coincidence fascinated Antoni Gaudí, who saw the property as an opportunity to pay homage to Catalonia’s medieval splendour.

Despite the fact that there was hardly anything left of the Gothic palace worth using, the symbolic load of the property proved irresistible to the architect. It was King Martín himself who had named it Bellesguard (“good view”) and it was there that he received the news of the death of his only child and where he remarried, to Margarita de Prades (witnessed by Pope Benedict XIII and Saint Vicente Ferrer) with the intention of producing an heir to the throne. However, Martín I died a few months later, which led to the extinction of the lineage of the House of Barcelona and the arrival to Aragon’s throne of a Castillian dynasty, the Trastámara’s.

Such was Gaudí’s absorption in this project that he acted as intermediary between the executors of Bishop Grau’s will and an interested party: Maria Sagués, the widow of Jaume Figueras, a rich flour trader and great admirer of the architect’s work.

Therefore, between 1900 and 1909, Gaudí actually fulfilled his homage to medieval Catalonia with a summer residence for Figueras’ widow that freely interprets the Catalan civil Gothic style by means of delicate constructive metaphors.

In the Torre Bellesguard, Gaudí proposes a free-standing edifice, of square ground plan, with the diagonals facing the cardinal points and two attached bodies providing rhythm to the structural volume: the stairwell (topped by a steep pinnacle) and the chamfered salon gallery. Gaudí provides the building with a Gothic air even though many elements belonging to the style are not incorporated, given that his solutions now show the freedom and originality characteristic of his mature period.

Resources such as exaggeratedly lengthening windows and the conically crowned form of the tower, or topping the façade with crenellations, add to this Gothic feel and lend a notable sensation of height to the edifice, rather surprising for such a low building.

Inside the Torre Bellesguard

Bellesguard is made up of a semi-basement, ground floor, main floor, another floor and an attic divided up into two levels. Domestic tasks are carried out in the semi-basement and the less sunny part of the ground floor. On the main floor, social activities in the lounges and dining room take place and on the first floor are the private rooms, the bedrooms. The attic was reserved for laundry. The vestibule, located on the jutting out section below the pinnacle, is the highest room as it includes the staircase that leads to the upper floors.

Gaudí did away with colour and ornamentation and instead the brick structure was plastered and coated with limestone paint. The pure white walls highlight the undulating and rounded forms, of Mudejar influence, of the ceilings and recesses, assisted by the intense light that floods through the windows creating evocative plays of chiaroscuro.

This book closely explores the works that Antoni Gaudí carried out during his life, it is a complete look at the artist’s legacy. The books includes more than 750 pictures, 3D recreations and computer graphics. Published by Dosde, it is one of the most comprehensive books to learn about the full curriculum of the great architect Gaudí.