In Barcelona there are so many interesting places to visit that its almost impossible to get to know them all. Therefore in this article we’ll tell you about a few of the lesser known places that are outside the most usual tourist routes.

Keep a gap in your itinerary to go and visit them, because they’re really worth the time. 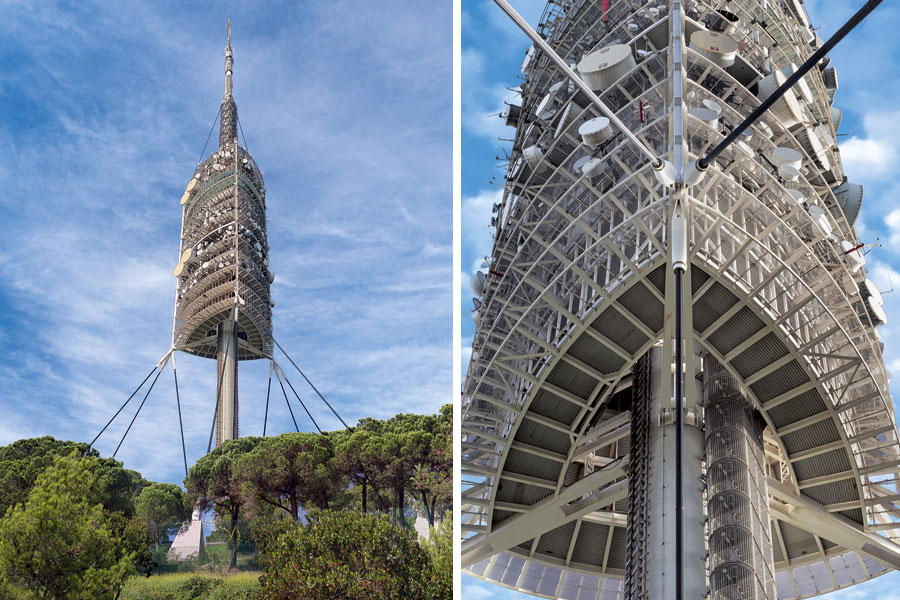 Built by Norman Foster in the year 1992, Collserola Tower provides many telecommunication services. The tower –located at the top of a hill that reaches 425 metres above sea level– has a cylindrically shaped concrete shaft on which a fourteen storey structure is attached and which is crowned by a metal aerial.

The building has all the necessary technology to be able to provide the television and radio signal of Barcelona and the rest of its metropolitan area.

2. MONASTERY OF SAINT MARY OF PEDRALBES 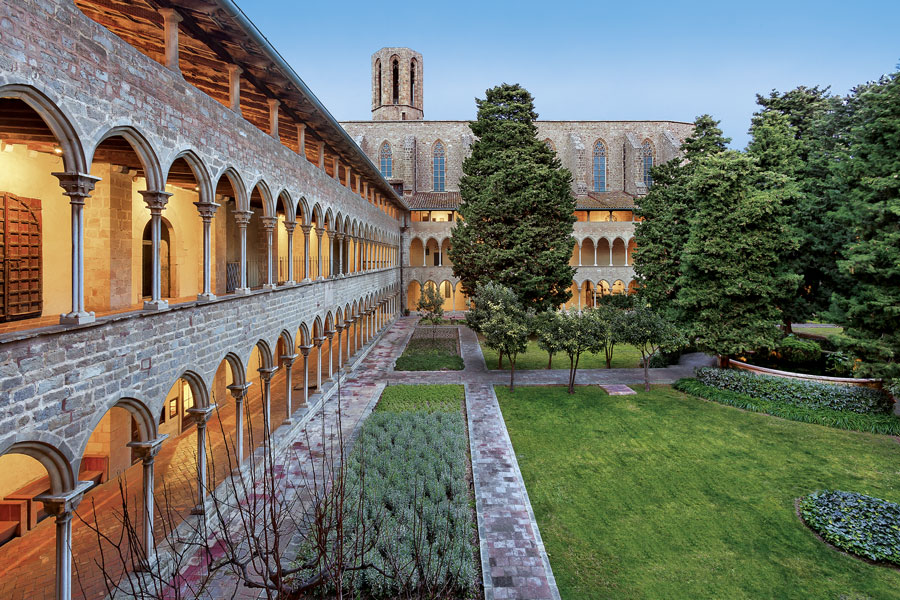 Founded in the year 1327 by Queen Elisenda de Montcada –wife of James II de Aragon–, the monastery of Santa Maria de Pedralbes constitutes one of the most striking monumental arrangements of the Catalan Gothic thanks to its homogeneous appearance, result of its rapid construction.

The different areas go around a three-storey cloister, which has one of its sides attached to a church. Open to the public in 1983, the monastery also holds an important collection of liturgical objects and works of art. 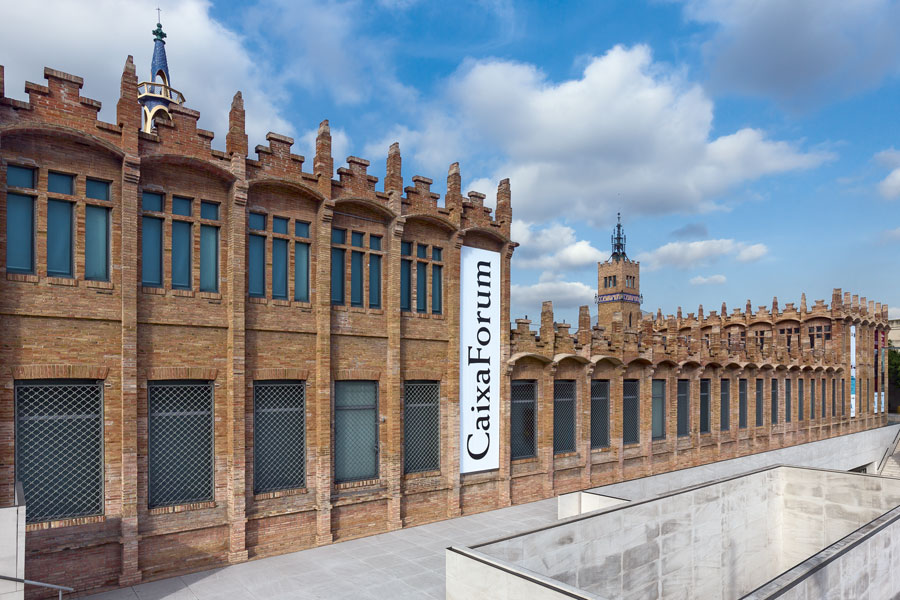 Originally the Casaramona Factory, of Modernist style, it has been home since 2002 to the Caixaforum, a cultural centre of the Obra Social La Caixa. Built in brick with wrought iron terminations by Josep Puig i Cadafalch, it rather looks like a castle.

The building conserves a frieze that refers to Casimir Casaramona, the owner of the former factory. 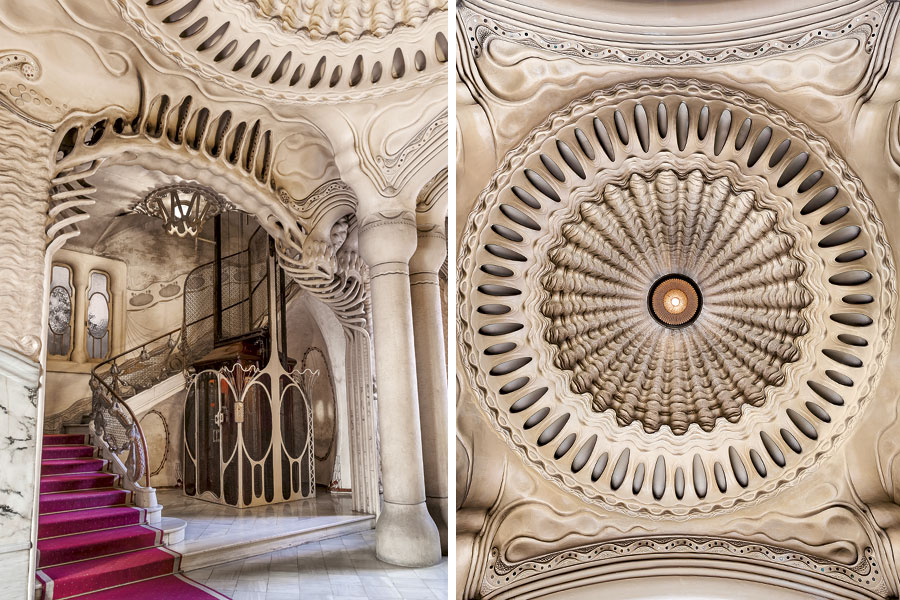 Greatly influenced by the work of Antoni Gaudí, in the year 1918 Manuel Sayrach constructed this incredibly detailed building of organic appearance. On the exterior, curved lines predominate as well as bone-like structures, which continue in the vestibule.

Responsible for channelling passage towards the inner block courtyard and the different residences, this space is structured around a series of softly-shaped columns that in turn support vaults of marine life inspiration, such as the latticework that is on the main staircase, based on the design of fishing nets.

5. THE PALACE OF THE BARON OF QUADRAS 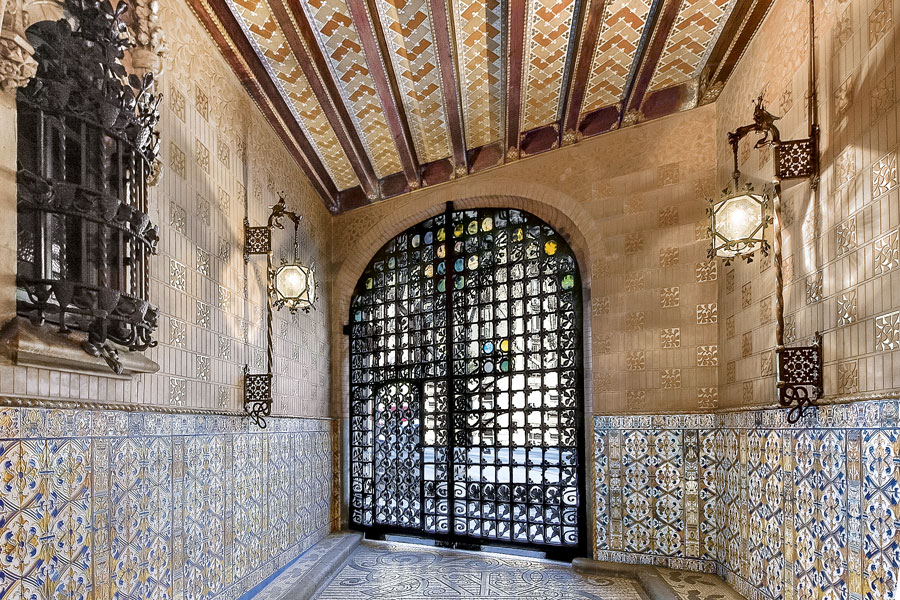 The Palace of the Baron of Quadras was built by Josep Puig i Cadafalch in 1902 and commissioned by Baron Manuel de Quadras. The palace on Avinguda Diagonal stands out for its historicist decoration.

Presided over by a stone staircase, the interior courtyard is inspired by the design of medieval palaces. 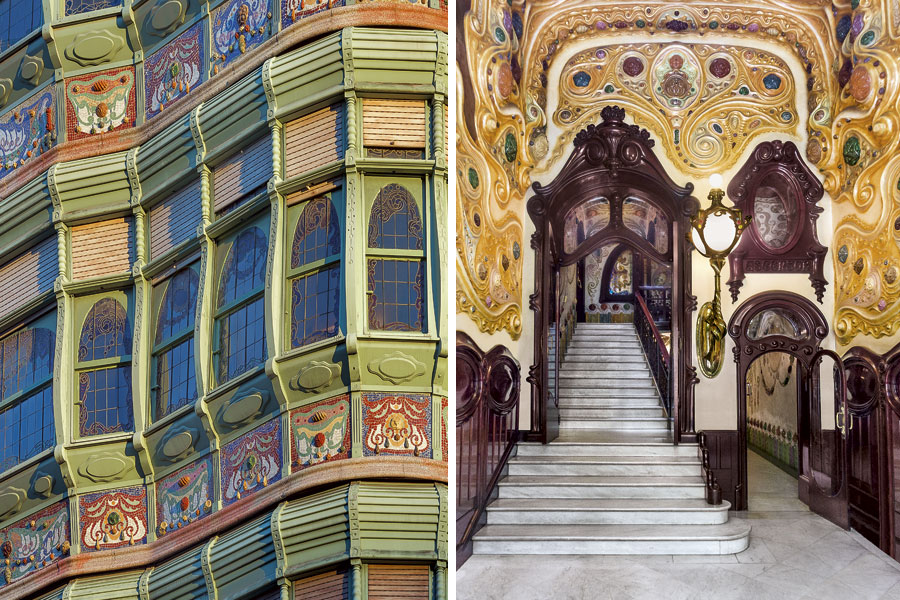 Constructed in 1911 by Salvador Valeri i Pupurull, it has curved forms and a profusion of decorative details.

With Gaudían influence, the building is made up of two quite distinct façades: the main one, situated on Avinguda Diagonal, is made from stone and has a symmetrical design; whilst the rear one, located on Carrer Còrsega, has a much more irregular shape and combines polychrome ceramic surface areas with wood galleries closed by blinds or shutters. 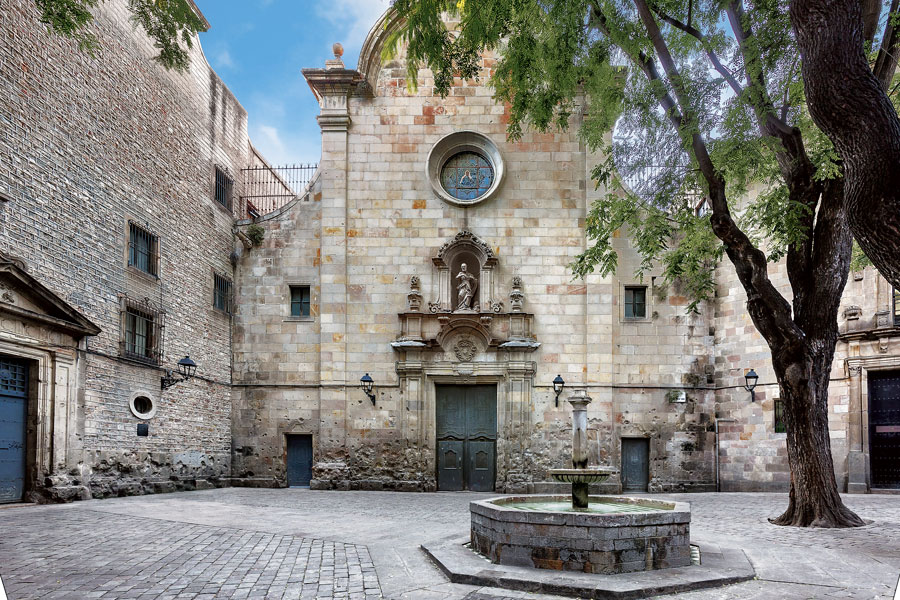 The Plaza de Sant Feliz Neri is presided by a baroque church that shows the effects of the bombs thrown by the fascists during the Spanish Civil War. The square is in the Gothic Quarter of Barcelona and is flanked by modernist style houses. 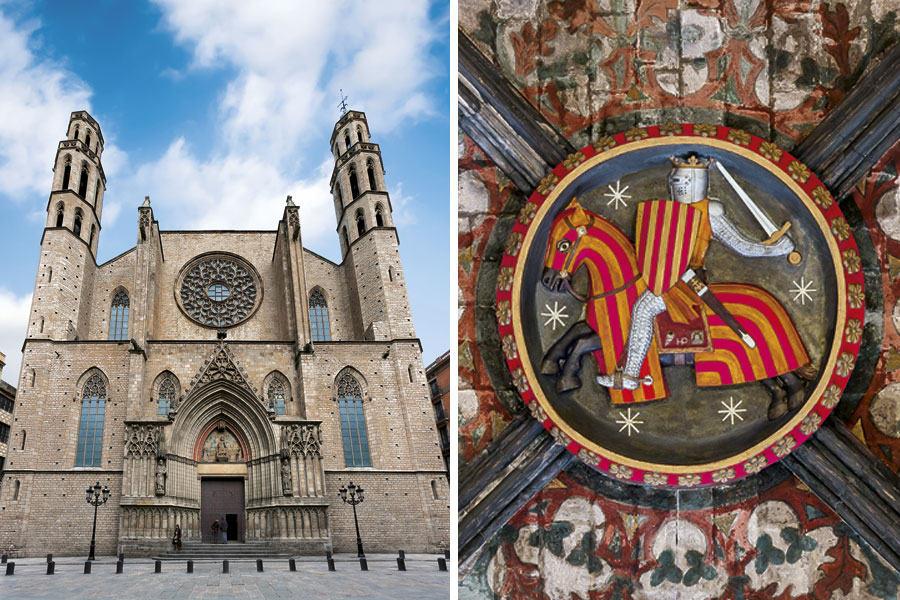 The Basilica of Santa María del Mar is a symbol of maritime power of medieval Barcelona. It was built between 1329 and 1384 with contributions from the neighbourhood’s residents. The main façade stands out for its solid appearance, while the columns provide the temple with verticality. 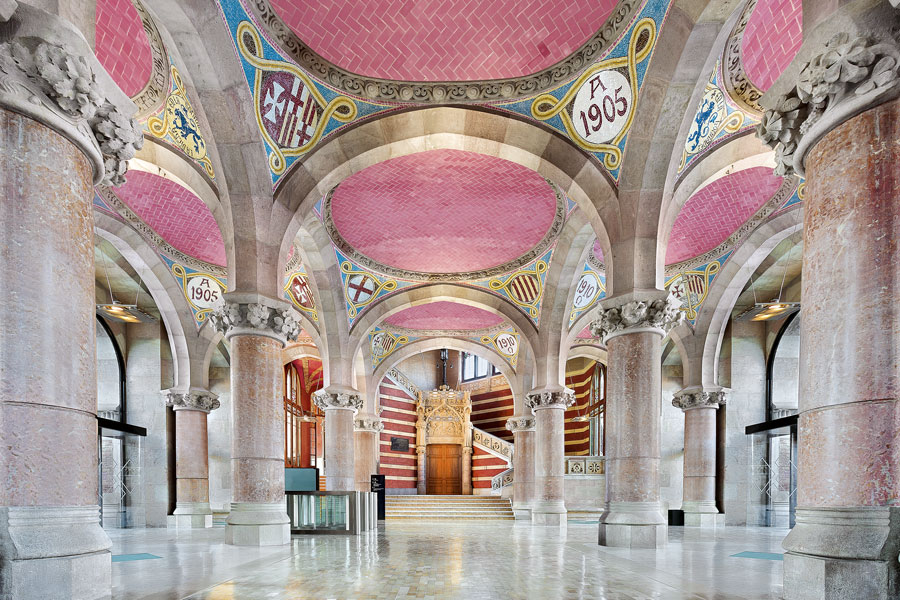 Spanning more than nine hectares, Hospital de Sant Pau designed by Lluís Domènech i Montaner converted into the most important modernist style civil work planned in Europe. Its construction was possible thanks to the financial support of banker Pau Gil, who wanted to create an important medical reference centre in the city.

Domènech i Montaner resorted to hardwearing materials that, at the same time, helped generate an atmosphere appropriate for the tranquility of the patients. On the exterior façades the architect prioritised the use of red brick, which he combined with stone. As for the roofs and the cladding on the cupolas, he opted for ceramic work. 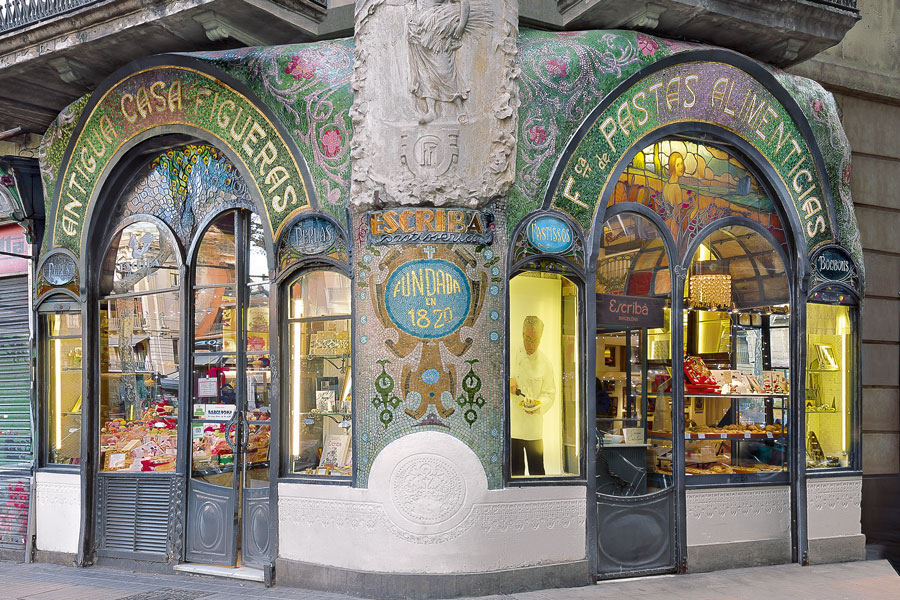 The blossoming of Modernism managed to infiltrate into the everyday aspects of Barcelona life and is fully demonstrated in the transformation that many of the city’s commercial establishments underwent.

The polychromy and the sinuous shapes that were characteristic of modernist architecture not only managed to provide an attractive appearance to shop windows and counters of commercial establishments in the city, but also recognised and underlined the sheer skill of craftsmanship.

The Antigua Casa Figueres, a patisserie designed by Antoni Ros; the Sarret Bakery or the Mestre Pharmacy are some of the most striking modernist business premises.

A Deluxe book to discover Barcelona