In 1883, Eusebi Güell finalized the acquisition of various properties in Barcelona’s present-day Zona Universitaria, in the Pedrables neighbourhood. One year later, Güell commissioned Gaudí with the first project to be carried out, which resulted in both a life-long working relationship and close friendship.

The architect worked on the design of the property’s wall and its entranceways, as well as some stables with a riding school and other additions to this summer residence, which a few years prior had been planned by architect Joan Martorell, whom Gaudí had worked for as a draughtsman.

Some of these elements were demolished in 1919 and now remaining (with other scattered constructions of lesser importance) are the property’s entrance lodges, the porter’s lodge, the stables, the riding school and most importantly the striking iron gate, a monumental work that has converted into the most recognisable symbol of this space created by Gaudí.

Throughout his life, Gaudí would carry out other projects for the businessman, such as the well known Park Güell or even a private residential house in the centre of Barcelona, Güell Palace.

Güell wanted the main entrance to be to the north of the property so it would be closer to the road from Barcelona to Sarrià, the route he took from his house on the Rambla.

Gaudí designed an entrance for pedestrians and another for carriages, protected by a wrought iron, dragon design entranceway, with just one gate, supported by a pillar topped with a stone and metal orange tree that depicted The Garden of the Nymphs myth that Catalan writer Jacint Verdaguer freely adapted in the poem L’Atlàntida: Hercules confronts the dragon Ladon in order to seize some golden oranges to win Queen Hesperis’ heart. For not managing to defend the garden properly, the dragon is converted into the Dragon Constellation.

Influence of Arab art in the Finca Güell

The poetic and mythological theme of The Garden of the Nymphs helped the architect unify and provide content to the diverse constructions designed for Finca Güell. Curiously enough, this reference to Greek mythology did not however lead him to use Classicism as the main style, but he was instead influenced by Arab art, in tune with the eclecticism predominant at the time and evident in his early works, such as the Caprice and Casa Vicens.

The applied arts in Finca Güell 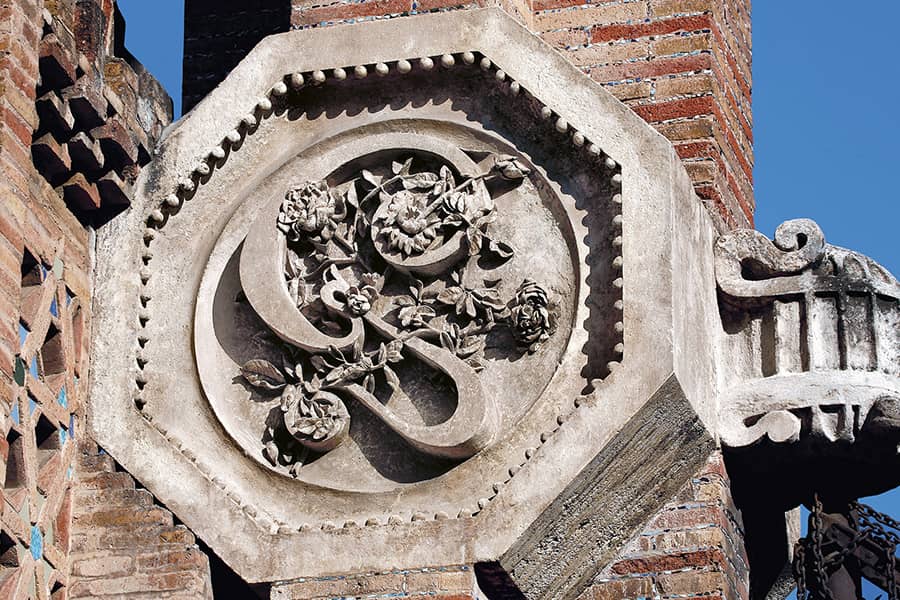 From his very first projects, Gaudí let the decorative arts play an important role in his works and Finca Güell, despite its singular function, was to be of no exception. In the ornamentation of the buildings and elements on the site, the architect combined very diverse materials, some of them of structural use (such as stone, brick and cement) and others for a purely decorative purpose, such as iron and tilework, though all had a clear aesthetic purpose.

The dragon gate is the best example of this artistic intention: it is a handcrafted work that recycles industrial material, which is assembled by means of a large variety of techniques (forging, earth-casting, stamping (metalworking) in hot and cold), anticipating the arrival of the avant-garde, whose main features included the recycling and mixing of materials.

The book “Gaudí Complete Work” is a complete look at the artist’s legacy. Published by Dosde, this book covers all the projects that the architect Antoni Gaudí carried out throughout his life, explaining them section by section. The book includes more than 750 pictures, 3D recreations and computer graphics.