What is La Pedrera?

Located on Passeig de Gràcia, in the heart of the Barcelona Eixample, La Pedrera is Gaudí’s last residential apartment building, constructed between 1906 and 1912, coinciding with the architect’s mature period, which was inspired by nature’s shapes and which gave rise to one of the most thought-provoking and unique works of modernist architecture.

Criticised in its time for its excessive originality, La Pedrera (also called Casa Milà), was declared a World Heritage Site by Unesco in 1984. Three years later, it opened to the public, and from then on has been visited by millions of people anxious to discover Gaudí’s ingenious universe.

The origins of La Pedrera 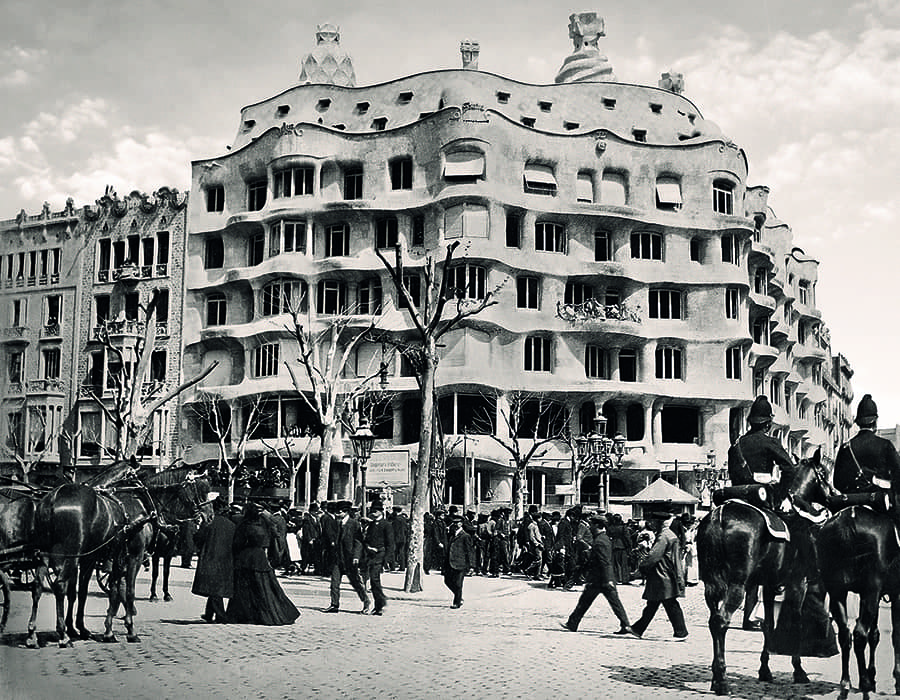 Pere Milà and Roser Segimon were an upper class couple who, like most well-to-do families in Barcelona, wanted to live on Passeig de Gràcia, paradigm of bourgeois splendour. Milà was a dandy, press promoter and owner of the Monumental bull ring. Segimon was a young widow. Her first husband had made his fortune in Latin America, was thirty-eight years older than her and on his death he left her a small fortune.

After Milà and Segimon married in 1905, they invested part of the inheritance on a plot of land on the corner of Passeig de Gràcia and Carrer Provença, and left it in Gaudí’s skillful hands, who at the time was completing the famous Casa Batlló renovation, whose developer was Pere Milà’s father’s business partner. The Catalan architect planned La Pedrera as a large property with a ground floor and five floors and, as was customary, reserved the entire main floor area for Milà and his wife, which came to 1,300 square metres.

Nonetheless, differences soon arose between Gaudí, who now aged 54 and at his most creative, wanted to work with total freedom, and the developers, who were dissatisfied with his elevated budget and daring constructive and decorative ideas. Nor did society seem prepared either for such a radical work, with the newspapers of the time publishing the negative comments and jokes made about Gaudí’s latest creation.Despite this initial incomprehension, La Pedrera, (“quarry” in Catalan, the nickname given due to its rocky façade) led to the culmination of the personal style that the genius had been developing in former works.

The façades of La Pedrera 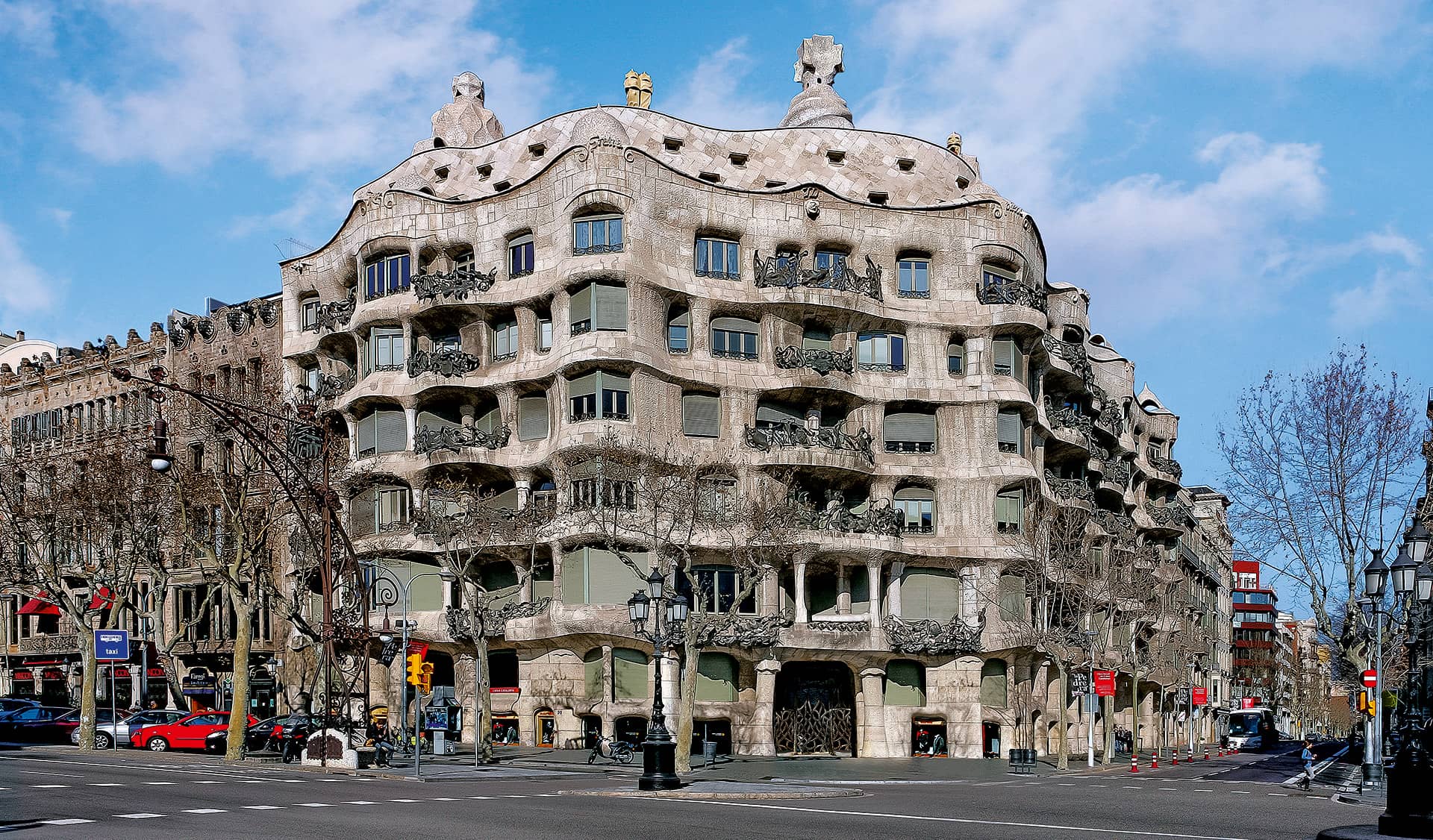 La Pedrera has three façades: one on Passeig de Gràcia, one on the chamfered corner and one on Provença Street. All of them are robust and dynamic, two concepts that are actually quite contradictory, but which are combined by harmonising the solidness of stone with undulating lines, the sinuousness of the balconies and the irregularity of their 150 windows.

Measuring 30 metres high, the façades’ 84 metre long extension is unequally distributed. The longest façade of La Pedrera is found on Provença Street and measures 43.35 metres, while the other two occupy around 20 metres each. The monument is unified by means of horizontal sequences that are situated between each one of the floors.

The façades are constructed with stone from Vilafranca del Penedès and Garraf. Their characteristic creamy, white colour undergoes constant mutations, whether it is throughout the day or during the different seasons of the year. These changes are due to the varying positions of the sun that, along with the texture of the stone, generates a sensation of movement.

The entranceways of La Pedrera

An agile and dynamic architecture for the entrance floor of La Pedrera was conceived in order that the passing from one space to the other would be fluid and natural. Gaudí created two great entranceways, designed in wrought iron and glass, which meant the interior could be viewed from the exterior and which facilitated communication with the outside. Once inside the house, the vestibules and the wide patios act as areas of transition between the streets and the residences.

The architect organised the entire ground floor of La Pedrera around two central patios, which were designed with the objective of providing natural light and ventilation to the residences, while at the same time, grouped together the circulation that went around the different floors of the building. But, without a doubt, one of the most revolutionary concepts of the time, was the lift as the main means of access to the residences, leaving the stairs as auxiliary and service access.

The inside of La Pedrera: the apartments

The layouts of the flats in La Pedrera are organised around an innovative concept of space and new way of understanding architecture: in other words, the open-plan system. Gaudí employed this method when building the apartments which was quite ahead of its time in construction methods.

Thanks to this breakthrough, the entire house is supported by a structure of columns, girders and beams, metaphorically similar to a skeleton, which allows Gaudí to do away with load-bearing walls and set out the floors and the interiors of the flats with greater freedom and flexibility. In fact, all the floors had different layouts and all the flats offered a diversity and a variability that had been non-existent up to the time, as the walls of the flats not only could be positioned in any place, but could also be modified, moved and could change their function.

Behind this innovation underlay a functional intention, given that Gaudí wanted to facilitate possible future transformations of the flats of La Pedrera: in other words, that they could evolve and be adapted to the necessities of future tenants and owners. 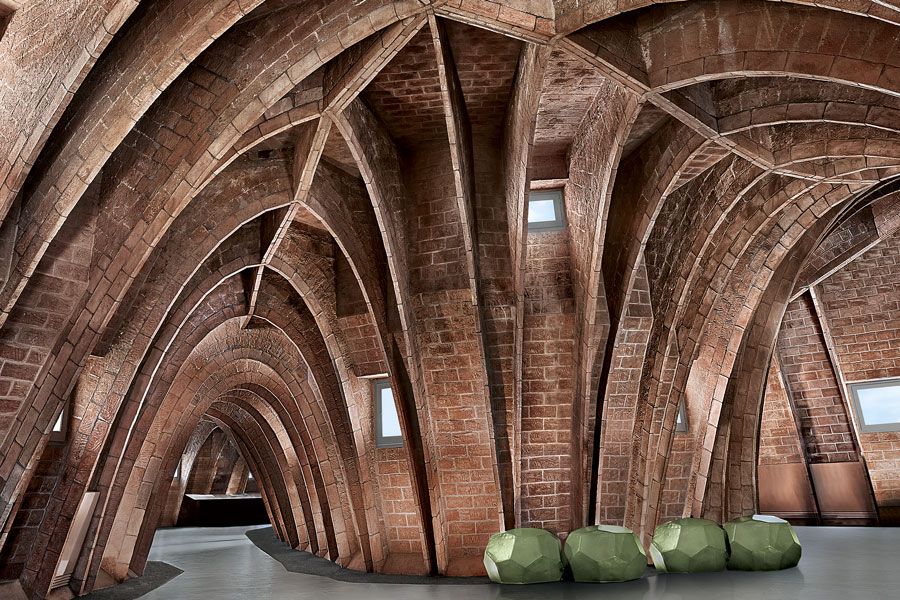 The last floor, the attic, is treated by Antoni Gaudí as the crowning piece of La Pedrera, as much from a plastic as functional point of view, in a way that this storey is endowed with its own architectonic system and clearly defined original forms. It is a construction independent from the other floors of residences, a structure over another structure and a space with a different task and personality.

Gaudí devised the attic of La Pedrera as a kind of chamber that sheltered the building from extreme temperatures, whether in summer or winter, a thermal regulator inspired by the model of the Catalan attic, common in farms and in ancestral homes. However, instead of building this insulating chamber with walls and beams in the traditional manner, the architect designed 270 brick arches, of different heights and widths, but all of them parabolic, in other words, similar to an open curve and symmetrical in respect to an axis. Moreover, these arches, on which the terrace of La Pedrera rests, create an undulating sequence that generates a sensation of movement within the attic.

As a result, this area emerges as open-plan and continuous, with neither walls nor columns to impede fluidity, whose arches evoke an organic space resembling the inside of a large animal.

The roof terrace of La Pedrera 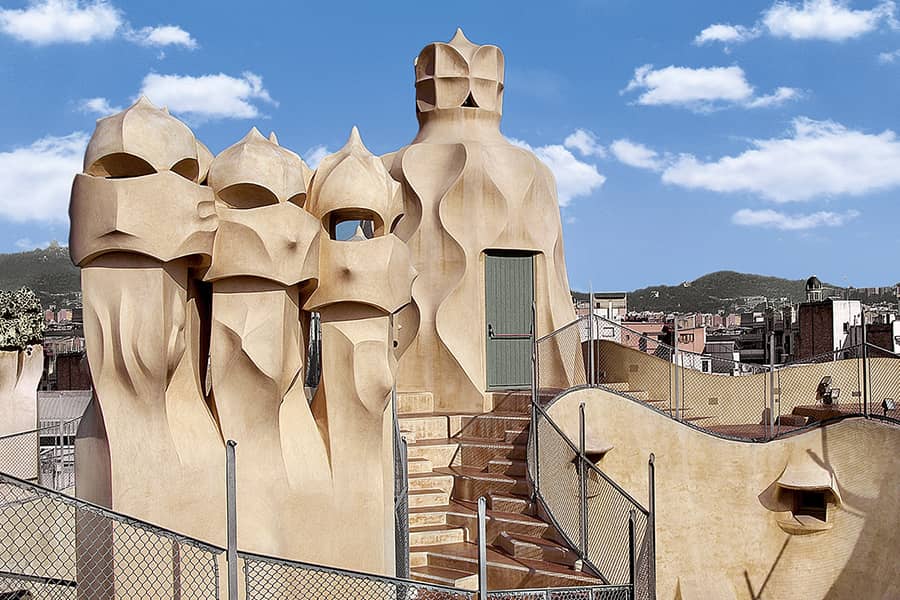 Gaudí deploys all his creative and expressive ability on La Pedrera’s roof terrace, converting this area, which at the start of the 20th century was hardly ever taken into consideration, into a universe of shapes, silhouettes and original textures that transcend architecture and turn this section into a work of art in its own right.

From a formal, aesthetic point of view, the architect’s main intention was that the roof terrace harmonise with the undulating rhythms that characterize the façade. Then, that the terrace, comprising of sections of varying volumes, would rise and fall generating different levels linked by stairs that vary in number of steps, size and shape. This staggered structure also corresponds to the uneven height of the attic arches which the terrace rests upon. Moreover, Gaudí solves the necessary functions of the terrace by grouping together and organising the arrangement of elements on this floor: the stairwells, the chimneys and the ventilation towers.

Transformed into sculptural works, these fantastical figures have been interpreted in many different ways and over time have been related to different symbolic aspects. All in all, the architect, by combining art and architecture, managed to create a singular space that comes over as both insinuative and evocative.

La Pedrera was the last civil work of Antoni Gaudí. The architect united aestheticism and functionalism in a building of innovative structure. La Pedrera was in its time subject to controversy owing to its original appearance.

This book on La Pedrera proposes a complete guided tour around Gaudí’s building and helps the reader to discover in detail the inside and outside of Casa Milà. Published by Dosde, the book includes numerous photographs and 3D illustrations carried out exclusively for this book. 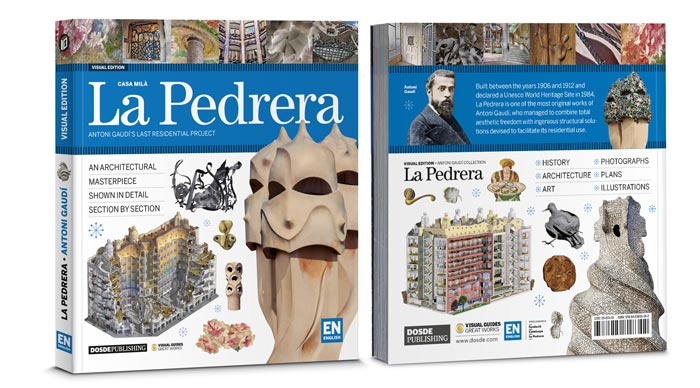