An icon of Modernisme

An inescapable reference of Barcelona cultural life, the Palau de la Música Catalana is considered one of the masterpieces of Catalan modernist architecture.

The building was constructed in the historical centre of Barcelona between 1905 and 1908 by the architect Lluís Domènech i Montaner to host the activities of the Orfeó Català, a choral society founded in the late 19th century by the composers Lluís Millet and Amadeu Vives who sought to tie music in with the ideals of conservative Catalanism. Owing to its artistic value, the auditorium was declared a World Heritage Site by Unesco.

The history of the Palau de la Música 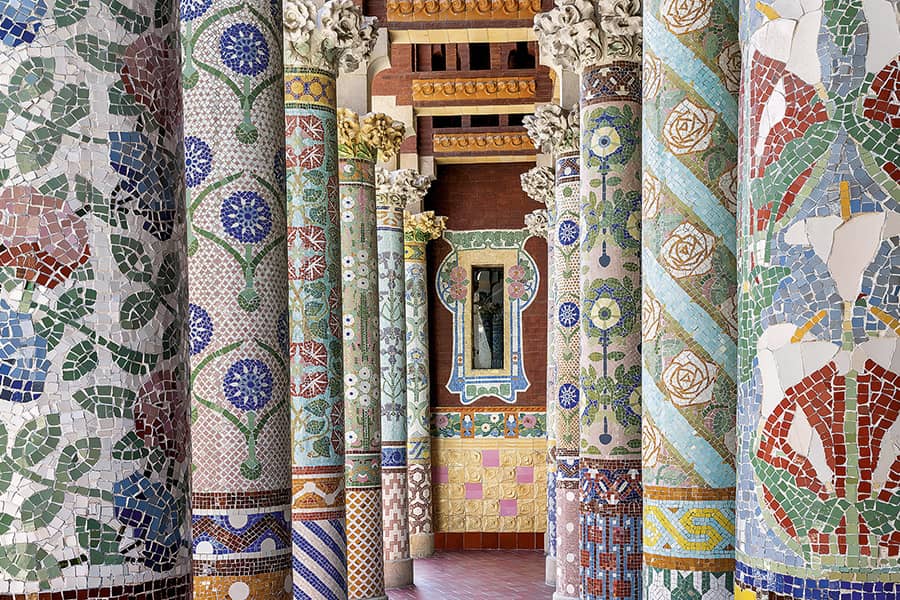 Initially comprised of a male choir, the Orfeó Català grew rapidly after its foundation in 1891, incorporating female and children sections and started reaping significant successes within the music scene.

In the year 1904, the board of the choral society, then directed by the influential jeweller Joaquim Cabot, decided that the time had come to give the Orfeó its own headquarters and auditorium, which led to the acquisition of a small, irregular plot of land in the Sant Pere neighbourhood, one of the most densely populated areas of Barcelona’s old part of town.

To carry out this project, those in charge of the entity turned to the talent and skills of Lluís Domènech i Montaner, an architect that was well-known for his compromise with the Catalanism movement coupled with his in-depth knowledge of cultural traditions. In total harmony with the developers of the work, Domènech conjured up a building, the Catalan Music Palace, with a striking and original design, which reflected both the rebirth of Catalan culture that was advocated by the Orfeó and the steady rise of a Barcelonan bourgeoisie keen to equip itself with a new identity. 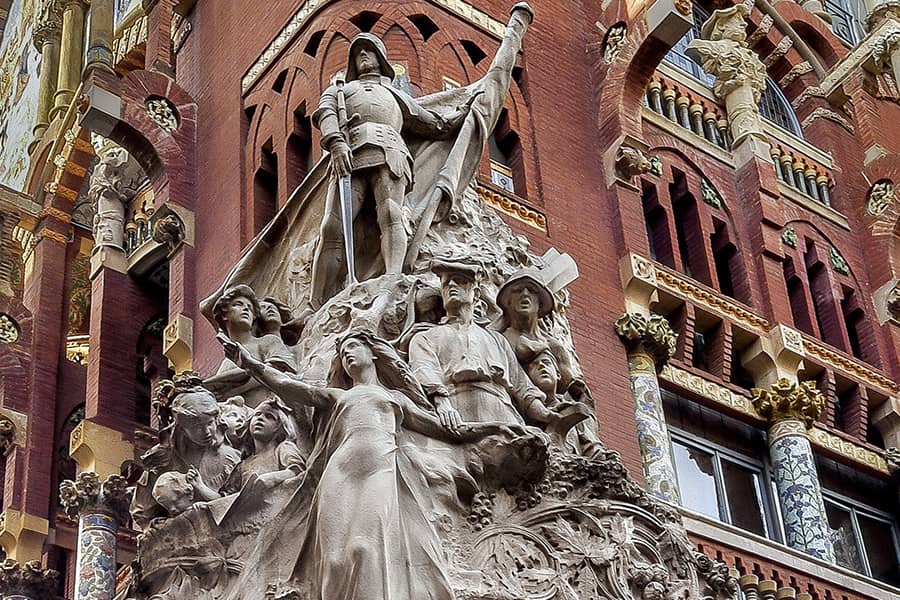 The site on which the Palau de la Música Catalana was built was actually amidst very narrow streets, a fact that meant it was rather difficult to get a good perspective of the building. Aware of this problem, Domènech used a similar distribution on the two visible façades of the building, by developing a sequence of balconies, columns and windows to generate a feeling of continuity that was also reinforced by the use of bare, red brickwork, glass and ceramic work.

Likewise, where the two façades intersect, the architect devised a striking, sculptural arrangement with reference to traditional Catalan folk music. This was Domènech’s way of paying homage to the origins of the Orfeó Català and, at the same time, a means of highlighting the presence of the main floor, which without this decoration would have gone unnoticed. 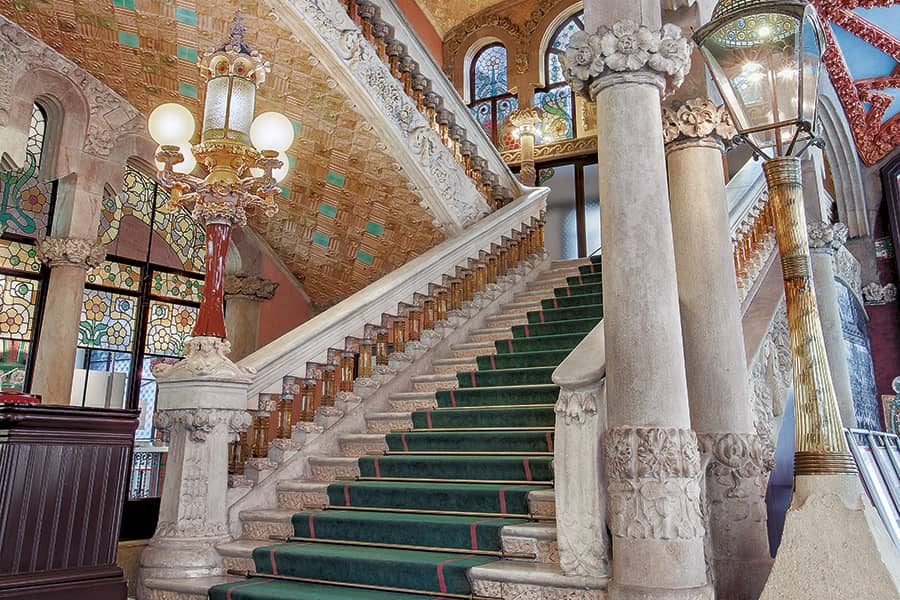 This sensation of optimism was highlighted even further by the wide chromatic palette used, one of the signs of identity of modernist architecture. The culmination of the decorative programme planned by the architect is the inverted stained glass dome (work of Antoni Rigalt and Jeroni Granell’s workshop) in the concert hall.

To host the recitals of the Orfeó Català, Domènech designed a large, oval auditorium floor with an orchestra and two floors, able to hold around 2,000 spectators. Bathed in natural light from the exterior thanks to the pioneering use of the curtain wall, the space meant that optimum acoustics could be obtained.

Added to its functional design was the most splendid decoration, in which Domènech combined with total expressive freedom the glass and ceramic surfaces with sculptures of allegorical character, such as the maidens and Valkyries sculpted by Dídac Masana and Pablo Gargallo that decorate the proscenium.

The book to discover the beauty of Modernisme

Developed in the late 19th Modernisme took its inspiration from the great book of nature to create works of an exceptional beauty, embracing different areas: architecture, painting, sculpture, decoration and jewellery. It reached its climax in Barcelona, where the buildings created by architects such as Gaudí, Domènech i Montaner and Puig i Cadafalch transformed the city.

With more than 300 stunning photographs, this book explores Modernisme in all its areas. Its exceptional pictures show in total detail the most creative modernist works of this movement. Published by Dosde, it is possibly the most complete book on this essential work of Modernism in Barcelona.