What is Park Güell?

Converted into one of the icons of the city of Barcelona, Park Güell is an extensive public park constructed between 1900 and 1914 by Antoni Gaudí, the main reference for Modernisme. The site, which was initially devised to hold an exclusive property development, opened to the public in 1923 and in 1984 was declared a World Heritage Site.

Within its 17 hectares are some of Gaudí’s most original and enigmatic creations, such as the dragon on the main staircase, the entrance pavilions and the undulating bench of the large, central square. All these elements packed with symbolism, convert Park Güell into a place that is as magical as it is inimitable and an essential place to visit in Barcelona.

The origins of Park Güell

In 1899, the Catalan industrialist Eusebi Güell i Bacigalupi acquired the land of an old farmhouse on the outskirts of Barcelona (can Muntaner de Dalt) with the idea of constructing a housing development of detached properties on it for well-to-do families. At this time, the city was densely populated due to decades of intense industrialisation that had attracted swarms of labourers from the countryside to the metropolis.

Nearly half a century before, in 1854, political and popular pressure had led to the dismantling of the city walls that prevented Barcelona from expanding into the adjacent plain. The urbanization of this vast expanse, measuring ten square kilometres (five times larger than that of the enclosed walled area) meant that the city got closer to and started to absorb various villages within the plain and reached the foot of the mountain range overlooking it.

Various private initiatives were planned to develop these peripheral zones. The most original one was, without a doubt, that of Güell and his trusted architect, Gaudí, who designed a housing development on one of the city’s hills so its inhabitants could get closer to nature.

However, the economic circumstances and the idealism of its creators (judged to be excessive at the time) led to the failure of the project in 1914, resulting in its transformation into a municipal public park in the year 1922, which it continues to be today, almost one century on.

The main entrance of Park Güell 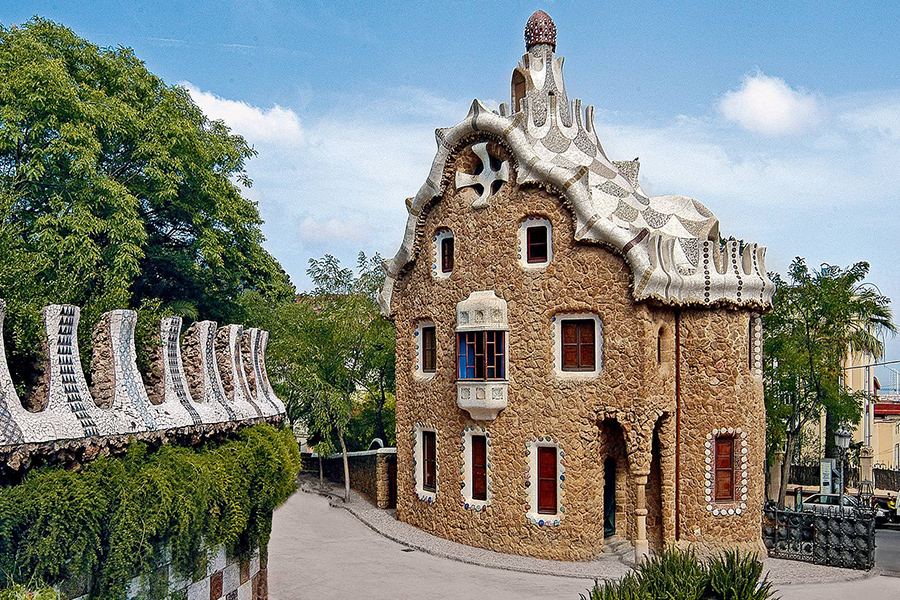 The architect designed a striking park entrance to capture passers-by’s attention using theatrical-like style constructions and conveyed messages by means of a multitude of symbols whose interpretation would solve the riddle of enigmas which came to the conclusion that: Park Güell is Paradise. The use of colour and exoticism on the entrance buildings aimed to distinguish two allegorical areas: Heaven and Earth.

The design of the two lodges flanking the gate (the caretaker’s lodge and administration lodge) responded, despite their whimsical appearance, to strictly functional criteria. With these buildings, Gaudí experimented with new structures based on organic forms that brought a unique touch to the park Güell site.

The stairway in Park Güell 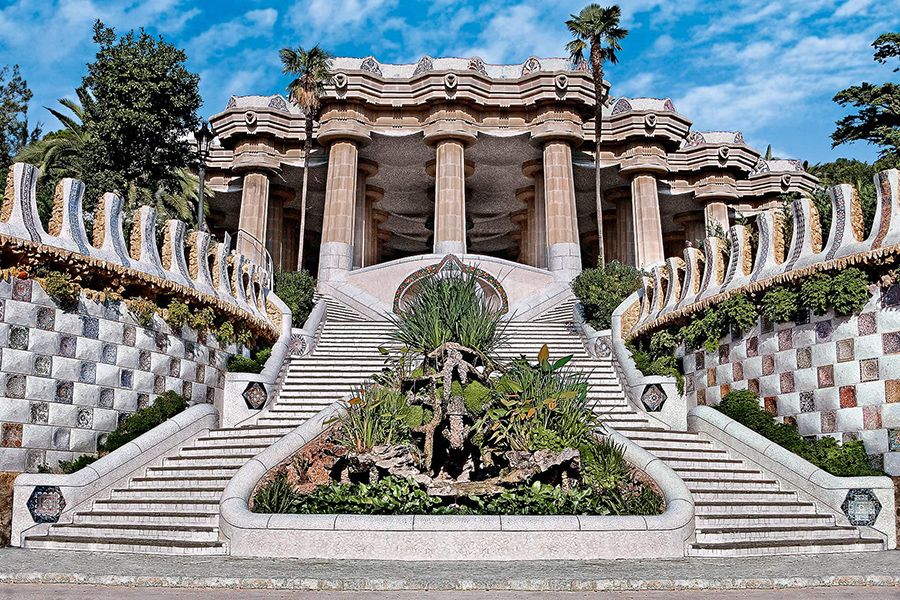 Situated between crenellated walls and with the imposing columns of the market place as backdrop, the Park Güell stairway is made up of four flights (three with eleven steps and one with twelve steps) and divided into two symmetrical parts by three fountains of organic form which, together, represent the idea of the geographical magnitude of Catalonia in its medieval splendour.

On the fountain on the first flight of steps, a circle represents the world and a compass evokes Gaudí as architect and Güell as developer of the park. On the second flight, a snake’s head, a symbol of medicine, appears below a Catalan flag. The third fountain is dominated by the famous dragon of Park Güell that is decorated with trencadís ceramic work, while the last flight holds an odeon-shaped bench. 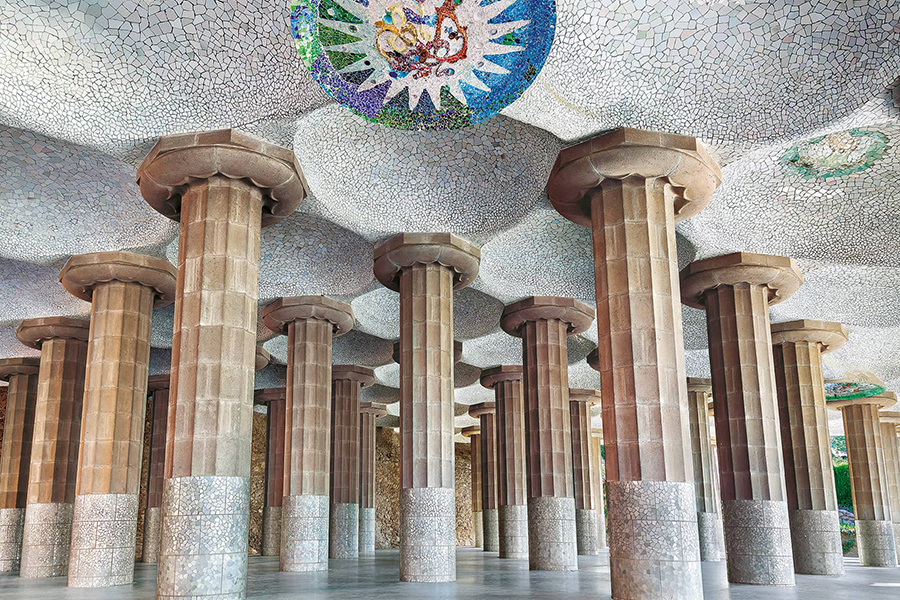 Situated on the second level of Park Güell, the hypostyle hall provides an imposing monumental backdrop that becomes more impressive the closer you get. As for its design, Gaudí was influenced by Doric columns from Classical Greece. The architect made the arrangement’s outer columns slant, common practice amongst Greek architects, which Gaudí deliberately exaggerated in order to reinforce the structure and give more visual dynamism to the area.

To be used as a market place by the inhabitants of the complex, the hall is comprised of eighty-six columns made from rubble and mortar that support a large square above. The roof is made up of semi-spherical vaults decorated with white trencadís work. Gaudí substituted four of the columns by putting colourful trencadis ceiling rosettes instead, which represent the four seasons. 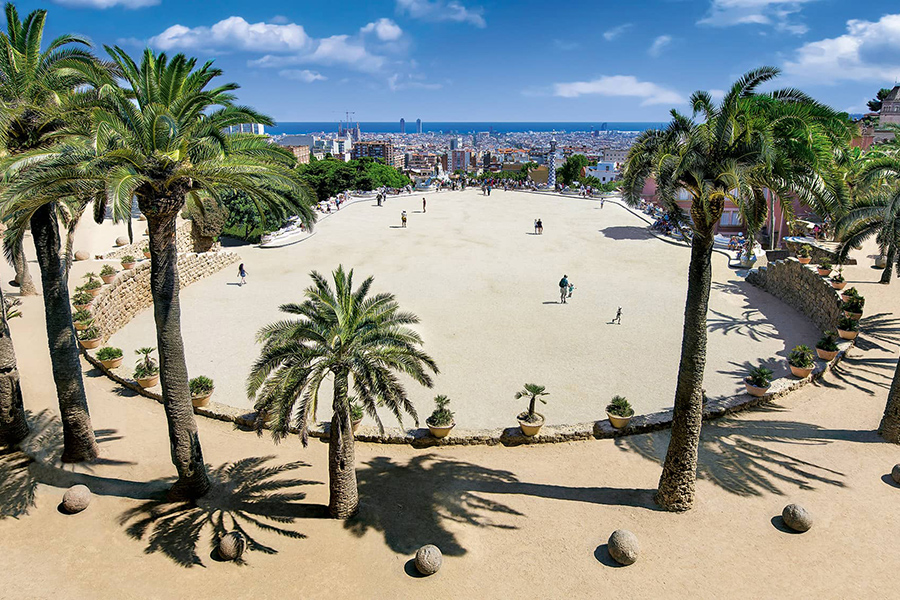 Inspired by squares (agoras) of Greek city-states (polis), Gaudí designed this vast meeting and recreation point for the housing estate’s inhabitants where civic activities and religious ceremonies could take place. Situated in the geographical centre of Park Güell, the large square, measuring 86 metres long by 43 metres wide, has an oval shape and a third of its surface area was dug out from the hillside, with a layout that harks back to Ancient Greek theatres.

The rest of the space, outlined by the long serpentine bench which acts as a railing or balustrade, rests upon the 86 Doric columns of the market place just below it, with which the large square transforms into a look-out point over Barcelona and the Mediterranean Sea.

The paths in Park Güell 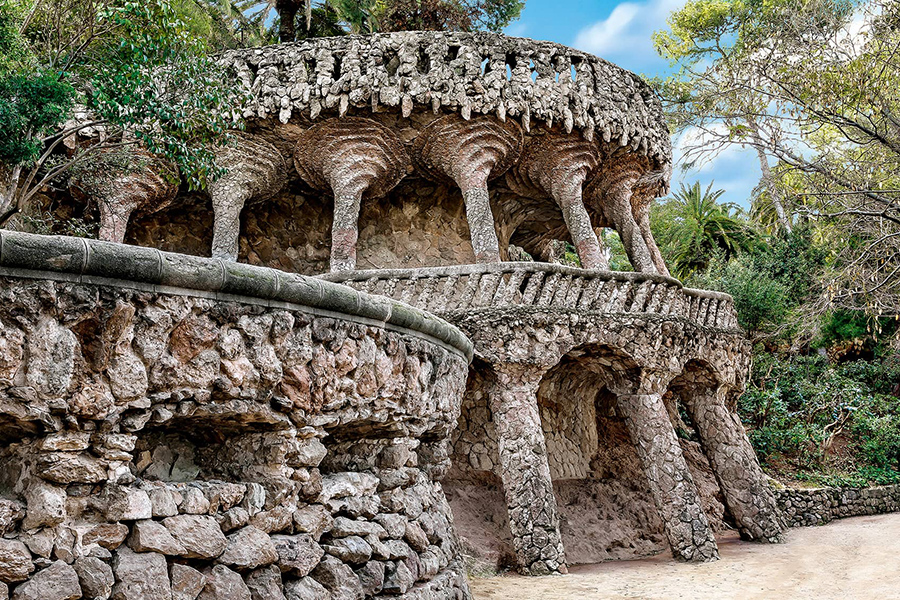 Gaudí got round the access problems caused by the challenging steep land by designing numerous viaducts, porticos, paths and tracks with the most original of structures, very functional designs and routes that aesthetically blended in perfectly with the land.

Inspired by the nineteenth century style English garden, Gaudí devised a network that joined every area of the site and which fulfilled the symbolic program of ascension from the worldly (the park’s entrance) to the most ascetic: the Calvary that crowns it.

In the year 1902, with the park’s pathway network almost complete, Güell commissions Gaudí with the project of a show-home inside Park Güell to show possible buyers the plots on the development. The constructors of the project (Pardo and Bardier) chose a plot with views of the square and Calvary, as well as access for vehicles via the Rosary pathway and pedestrian access via the lower viaduct.

At an early stage Güell noted the early signs of failure of his project and decided to halt the construction of the show-home, but Pardo and Bardier, more optimistic, obtained authorization from the developer to erect a house at their own cost and risk. This time, the person responsible for the project was architect Francesc Berenguer, an apprentice and close collaborator of Gaudí.

A tour of all the nooks and crannies of Park Güell

Devised as a select urban development, Park Güell is one of Antoni Gaudí’s most important projects, declared a World Heritage Site by Unesco in the year 1984.

This book on Park Güell explores one of Gaudí’s most visited monuments in detail, with more than 280 photos of the most characteristic corners of this garden city. 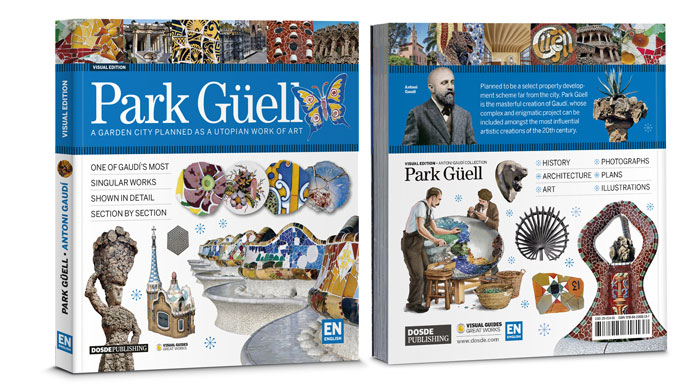