Founded by Hercules, according to the legend, the capital of Andalusia stands out for its monumental beauty and long history. The combination of cultures that it has received over the centuries is reflected by its architecture, which has converted into a melting pot of styles from very diverse periods.

The history of Seville

Seville’s historical evolution was marked by the presence of the river, the city’s economic force. The legend goes that it was founded by Hercules, though scientific investigations coincide that it was actually due to the work of the Phoenicians and occurred around the 8th century BC.

In this enclave the Romans founded the colony of Hispalis, which in the 1st century AD consolidated itself as one of the main commercial centres in the Iberian Peninsula. From the year 712 AD, Seville became part of the new Arab-Muslim state and registered progressive growth, especially when it became the European capital of the Almohad empire, which invaded the Peninsula in 1147.

After conquering it in 1248, King Ferdinand III of Castile, repopulated the city with Christians and Jews. From then on, Seville was closely linked to the monarchy and started expanding again due to its strategical position. It became a major trade and financial centre when, following the discovery of America, the city was chosen to accommodate the House of Trade, created in 1503 to control trade and relations with the New World.

This golden age ended between the 17th and 18th centuries, when the plague epidemics, the monarchical crisis and the transfer of the House of Trade to Cadiz plunged Seville into a long decline. However, the city resisted and from the 19th century began to recover its former vitality, until being recognised again as one of the main European cities of reference. 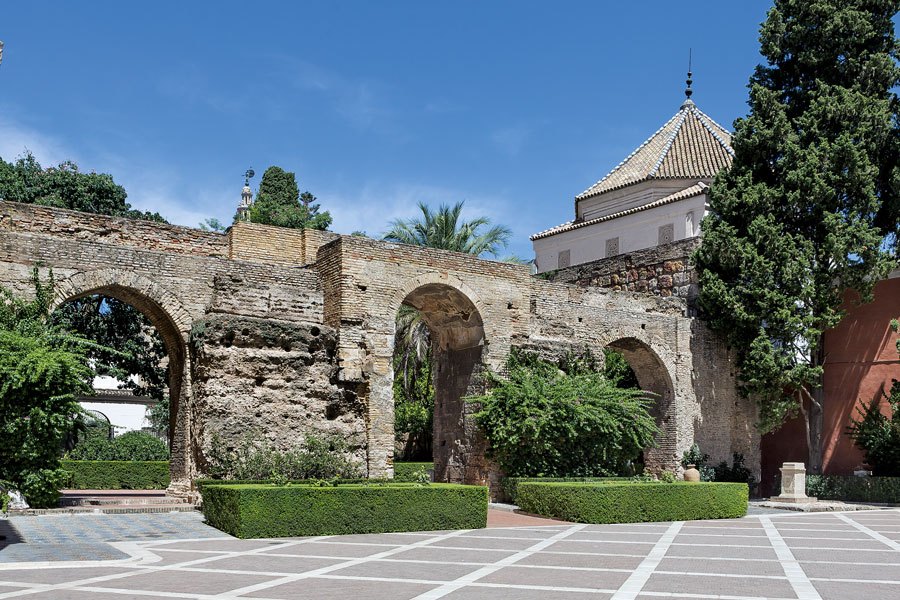 Measuring around four square kilometres, Seville’s old quarter is the largest in Spain and one of the biggest in Europe. Its surface area roughly coincides with the urban centre delimited by the 12th century city walls (now gone) and its size demonstrates Seville’s urban and economic importance in the late Middle Ages, when its port maintained connections with all the then known world, and later grew with the monopoly of trade with the American colonies.

In accordance with its historical importance, the old quarter is also home to the main monuments of the city, amongst which include the Cathedral, the Archbishop’s Palace, the Royal Alcazar and the General Archive of the Indies, architectonic symbols of the church and the monarchy, the powers that dominated the city in times of the Crown of Castile and, later, the Spanish Crown.

Added to these monuments in Seville there is a wide selection of temples, public buildings and large stately homes, as well as other sites of interest, such as the Plaza del Triunfo or the Plaza del Cabildo. 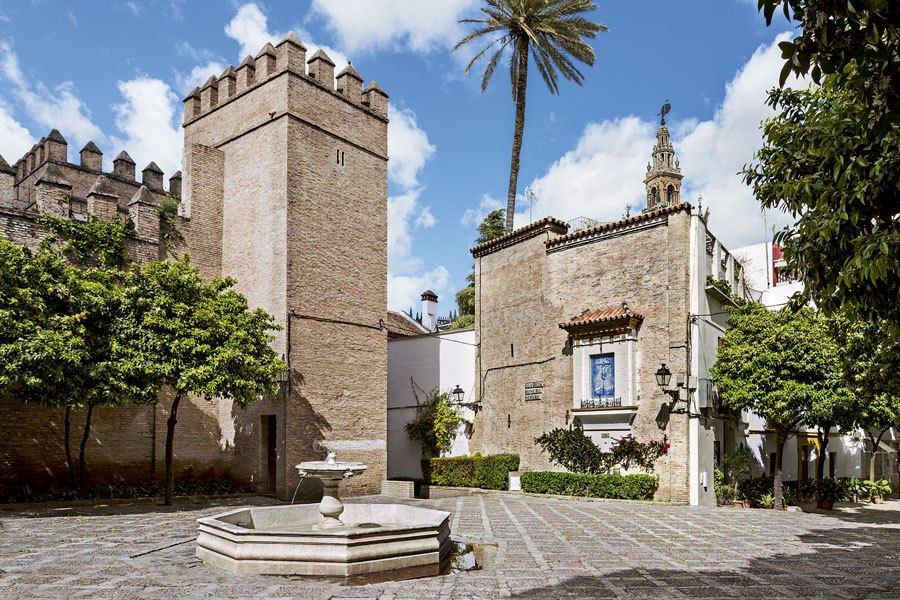 Due to its strategic location, Seville had had the need since ancient times to equip itself with a great fortress to protect itself from possible enemy incursions. The old nineth century Muslim palace, would in the eleventh century be followed by, on the present site, the Abbadid dynasty’s Alcázar Bendito (the Blessed Fortress).

Later, between the twelfth and thirteenth centuries, coinciding with the arrival of the Almohads and the capital status of Seville, the Alcazar was renovated and enlarged, until practically reaching its present size.

King Alfonso X the Wise was responsible for introducing gothic art, while King Peter I chose his residence to be in the Mudéjar style, the synthesis of Christian and Islamic art. The Catholic Monarchs and the Emperor Charles V also carried out some refurbishments, according to the classicist taste of the Renaissance, and at a later date diverse elements belonging to the baroque style were also added.

Architectural and decorative interventions were resumed under the Bourbon dynasty, both in the nineteenth century, during Isabel II’s reign, as in the twentieth century, under Alfonso XIII. Declared a World Heritage Site by Unesco in 1987, the Alcazar continues to be used as a residence for the Spanish monarchy on their visits to Seville. In fact, this architectural complex is the oldest royal palace in use in Europe. 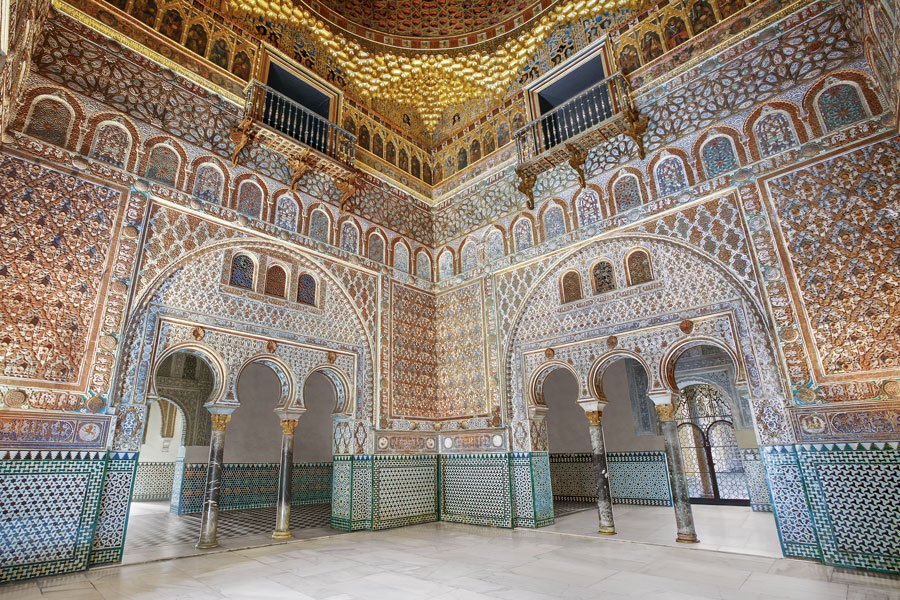 The cathedral is the nucleus of the old town and dates back to medieval times. Also known as the Magna Hispalensis (“the Great One of  Seville”), the cathedral is the largest Gothic temple in the world and emerged to substitute a former 12th century mosque.

Its most well known element is La Giralda, the belltower on the northeast corner of the cathedral, which has converted into the main symbol of Seville. 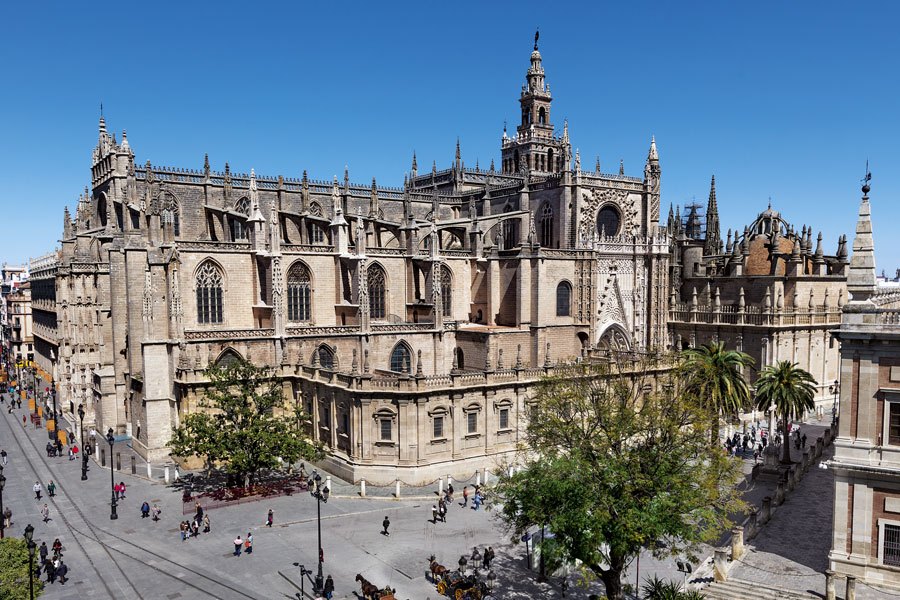 Between the thirteenth and fifteenth centuries, following the seizure of Seville by King Ferdinand III, there was soon a proliferation of stately homes, initially linked to the members of the Castilian aristocracy that had received land and privileges as compensation for their military prowess in the Conquest of Andalusia. These properties started out as one or several buildings that were expanded and renovated over time, without following a pre-established scheme, until acquiring a labyrinth style layout.

From the sixteenth century, the Sevillian house-palace style (stately home) was already fully consolidated. It was common that household space was organised around a large central courtyard, often presided by a fountain, and the rooms were distributed on two floors. Likewise, in order to reflect the economic and social status of their owners, the houses were decorated with a wide variety of plasterwork, tiles and sculptures, incorporating the stylistic trends of the era in which they were built or renovated.

This artistic exuberance is evident in buildings such as the Casa de Pilatos, Casa de Salinas, the Dueñas Palace and the Condesa de Lebrija Palace, whose careful design meant that Seville was considered in the sixteenth and seventeenth centuries as “the new Rome”. 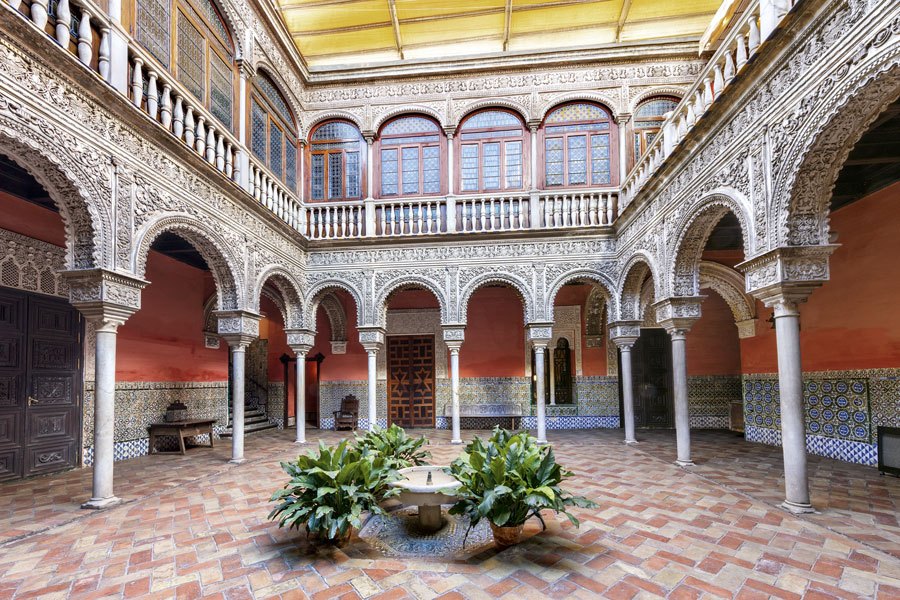 The present administrative and commercial district of Seville corresponds to the surroundings of the catedral of the ancient Muslim city. The centre of Seville underwent intense construction work during the Middle Ages and the Modern Age, during which both sumptuous palaces and modest houses were built.

Within the centre are a number of official institutions, such as Seville’s City Hall, as well as some of the busiest streets in the city. Its long history and monumental architecture coexist with the Sevillans’ hectic commercial and social life.

Plaza Nueva, the Church of the Saviour and the Church of Saint Louis of the French are some of Seville’s historical monuments, which contrast with modern constructions such as the iconic Metropol Parasol, this gigantic wood and concrete structure that since 2011 has covered Plaza de la Encarnación and which was designed by German architect Jürgen Mayer. 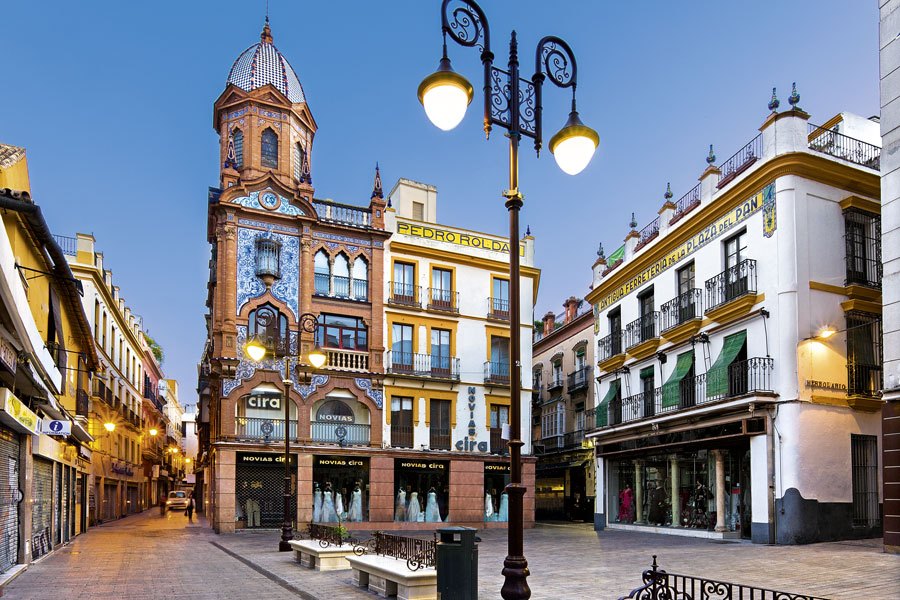 To the south of the historical quarter is María Luisa Park, the most important in Seville. The site it occupies was originally part of the gardens belonging to San Telmo Palace, converted almost one century later into the private home of Antonio de Orleans, Duke of Montpensier, and his wife, the Infanta María Luisa Fernanda de Borbón.

It was actually the Infanta María Luisa who decided to give up most of the gardens to the city in order that a large public park could be created. The total transformation of the gardens began at the beginning of the twentieth century in preparation for the Ibero-American Exposition of 1929.

Its remodeling included the creation of the monumental Plaza de España, conceived as the most emblematic space of the Ibero-American Exposition, as well as the construction of several pavilions that acquired new uses after the event was held. Today, Plaza de España is one of the most admired monuments in the city of Seville.

A photography book on Seville to discover the city

This photography book on Seville offers a complete visual guide to the city and its emblematic sites, with incredible photos, thorough information and fascinating facts. Its pages portray the more traditional Seville as well as its more modern side, with contemporary constructions that have converted it into a modern and cosmopolitan city.

Published by Dosde in a compact and easy-to use format, this photography book shows off a unique city with a rich artistic and architectural heritage. The book completes the collection of books on Seville produced by the publishing house.