A building transformed into a work of art

Located on Passeig de Gràcia, the most important boulevard in Barcelona, Casa Batlló is considered as one of the most original works of architect Antoni Gaudí, a major reference of Catalan Modernism (Modernisme).

The building was constructed between 1904 and 1906, coinciding with Gaudí’s mature architecture period, and owes its name to the developer of the work, textile entrepreneur Josep Batlló. Since 2005, Casa Batlló of Gaudí has a formed part of Unesco’s World Heritage Site list.

The history of Casa Batlló 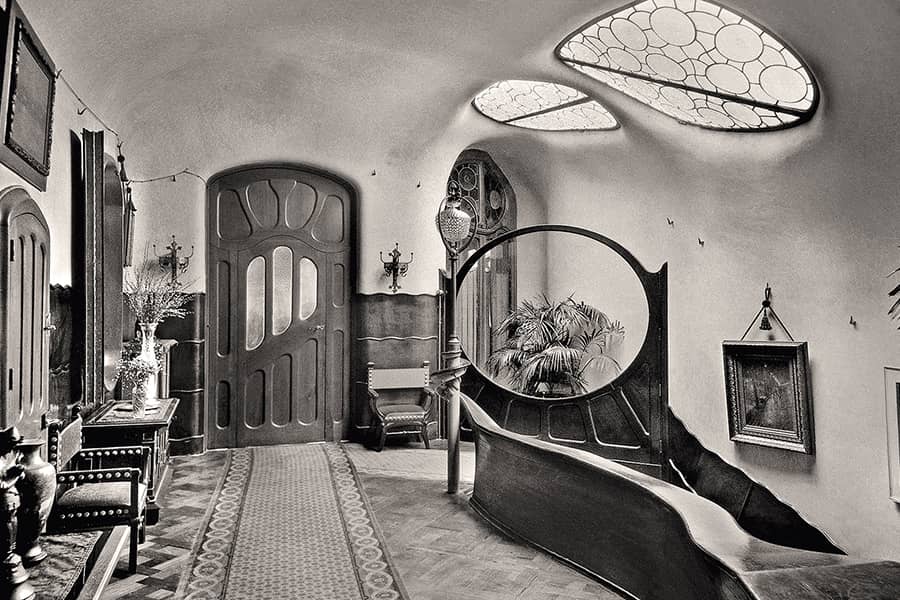 By the start of the twentieth century, Passeig de Gràcia, designed by town planner Ildefons Cerdà as one of the main axes of Barcelona, had become the favourite street of the bourgeoisie. Well-to-do businessmen were eager to show off their status by commissioning fashionable architects of Catalan Modernism with the construction of large houses on the emblematic boulevard.

In 1903, one of these industrialists, Josep Batlló, acquired a property built in 1877 by Emili Salas Cortès, who happened to be one of Antoni Gaudí’s former teachers. The dullness of the work, however, contrasted greatly with the spectacular nature of its neighbouring Casa Amatller, designed by Puig i Cadafalch, and, in 1904, Batlló decided to call on the services of Gaudí, who at the age of 52 was at his most popular.

At first, Batlló suggested demolishing the former building and constructing one of new ground plan, but the architect convinced him to maintain its structure and carry out a total refurbishment instead, adding two more levels (one storey more and an attic) and to completely redo the façade, the central patio well, the ground floor and main floor, where the Batlló family’s apartment would be. These were the origins of Casa Batlló, today an icon of Modernisme in Barcelona.

The façade of Casa Batlló 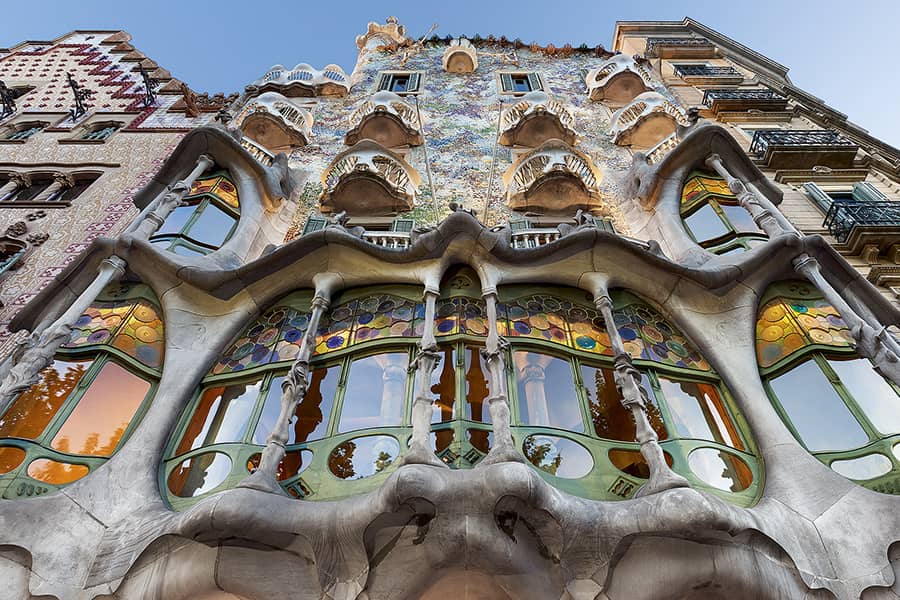 Antoni Gaudí employed all his creative and technical genius when renovating Casa Batlló, but especially on the main façade as he wanted to hold on to the original structure while at the same time concoct something totally unique. He therefore created plaster models which he himself sculpted until achieving the desired effect and then personally oversaw the putting into place of the ceramic plaques and trencadís work on Passeig de Gràcia.

The result is an architectural style that cleverly combines surprising shapes and intense colours that exude a pleasant sensation of movement throughout the Casa Batlló building. As Gaudí was such a keen observer of nature, he combined materials such as stone, glass, ceramic work and iron, in such a way that when the sun struck the façade, a poetic and warm play of light and shadow would be evoked. As with other works by the architect, the façade of Casa Batlló has been interpreted in many different ways.

It has been likened to the Mediterranean Ocean or the Mountain of Montserrat. Others have gone so far as to say that it is a metaphor of carnival time. Then there are those who only refer to it as “the house of bones”, for the bone-like hollows and columns on the rostrum. However, without a doubt, one of the closest interpretations is the one that compares the façade with Claude Monet’s water lily paintings.

Once inside the Casa Batlló, the general vestibule, of gentle shape and bluish tones, organises and directs the traffic flow up to the different residences in the building by means of different staircases, a private one for the owners and another for the tenants.

This cave-like space, with rectangular ground plan and curved ceilings includes the caretaker’s lodge, a few storerooms and leads directly up to the private hall of the flat on the main floor. The neighbours’ or community staircase was used by tenants and by the Batlló family’s servants. 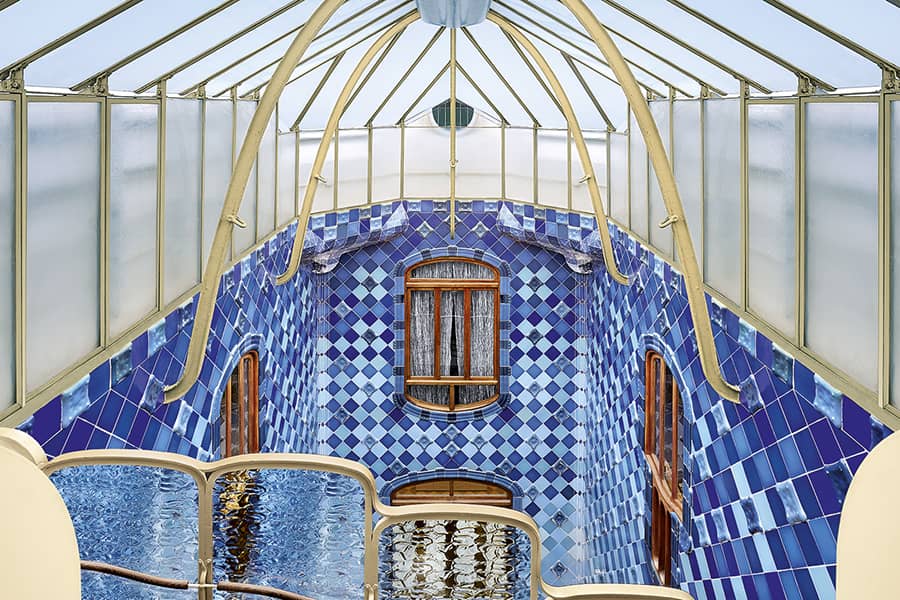 One of the most striking interventions carried out in the modernist refurbishment of Casa Batlló was the increase in size of the central patio well, which with its new dimensions of thirteen metres long by four metres wide by twenty-six metres high turned it into the central point of communication between the different floors by means of the lift and the neighbours’ or community staircase.

The enlargement designed by Gaudí also managed to substantially improve the ventilation and illumination of the interior rooms of the properties, an aspect commonly ignored in constructions of the time.  For this purpose, the architect devised large-sized windows and vents for the walls and turned to a decoration using light tone tiles, whose gloss reflects the natural light proceeding from the large, rectangular skylight located on the attic floor. 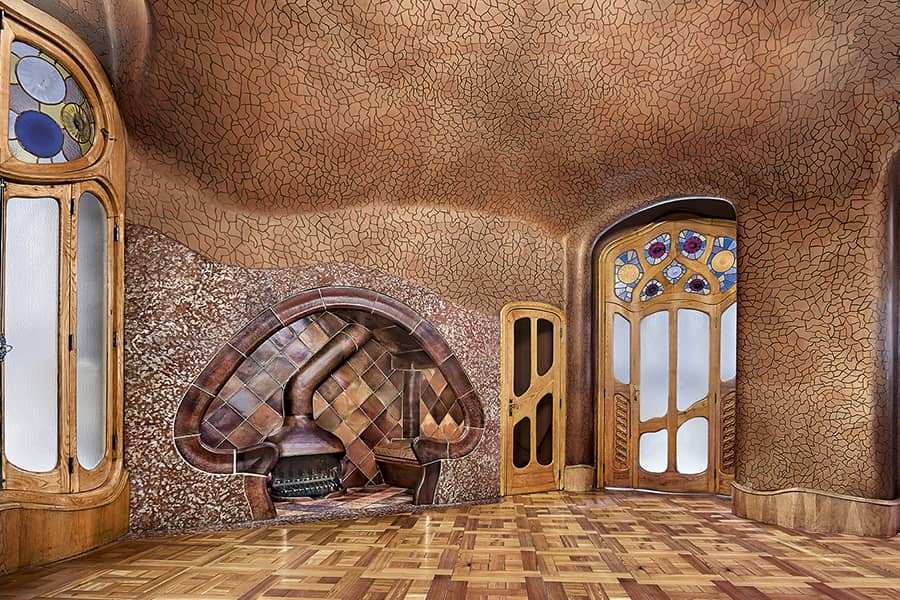 Guided by functional criterion, Gaudí structured the layout of the Batlló family’s property into three different parts, each one of them assigned for distinct uses. Overlooking Passeig de Gràcia are the main rooms, which receive natural light thanks to their large windows in the rostrum; the dining room and the bedrooms are located on the rear façade, connected with a terrace or patio that was for the Batlló family’s own exclusive use; and in the central space an area was fitted that was provided with amenities such as the kitchen and the bathroom,  as well as the different entranceways to the rest of the floors in the building. 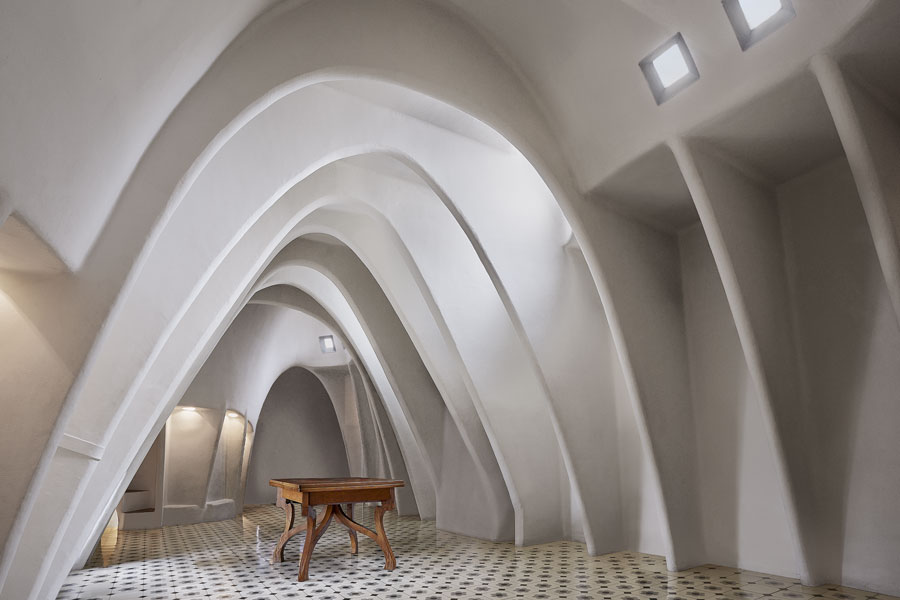 Antoni Gaudí tackles the last floor of Casa Batlló, the attic, as the building’s crowning piece, in the expressive, artistic sense as well as the functional sense, in such a way that this floor is endowed with its own architectonic system and original forms, on the interior as well as the exterior.

It is an independent construction in respect to the lower floors; the structure of the apartments is totally different to that of the attic and this is due overall to the fact that they are spaces that are devised for completely different uses. From the functional point of view, Gaudí plans the attic as a protection chamber for the building and it is also used as service quarters. He constructs it by using a series of catenary arches, solely built with brickwork, which are plastered over and support the ceiling vaults, which the roof terrace rests on.

This simple but rather ingenious structural device, which the architect applied in various projects such as the Teresian College and later on in La Pedrera, generates a flowing, spacious, continuous area with great, thought-provoking power that seems to take its inspiration from the rib cage of an animal, which has also given rise to an interpretation that likens the attic to the inside of a dragon, whose scales are recreated on the Gaudían Casa Batlló’s rooftop.

On Casa Batlló’s roof terrace,  Gaudí gives free rein to his imagination and uses all his creativity to transform this space, which at the start of the twentieth century was hardly taken into account when planning a building, into a universe of forms, silhouettes and original textures, which transcend architecture to become sculptural pieces of great artistic merit.

Apart from the poetic value of the terrace, the architect defines the functional aspect of this area of the house by organising the floor and its elements in a logical way, and offering rational solutions for the different requirements of the space. Thus, Gaudí puts two stairwells, four groups of chimneys and ventilation shafts and a small attic below the terrace, all of the latter are covered in delicately coloured trencadís work.

With total aesthetic freedom, these sculptural works are given curved, ductile and organic forms, inspired by the laws of nature, which the attractive and surprising universe of Antoni Gaudí revolves around.

The originality of Casa Batlló never fails to surprise despite the fact that 110 years have now passed since its creation. Located in the city of Barcelona, it is one of Antoni Gaudí’s most recognized and admired works and is a clear example of its creator’s unlimited imagination.

The book “Casa Batllo Deluxe“, a book in a deluxe edition, unveils this truly remarkable building. The incredible photographs, illustrations and 3D infographics created exclusively for this book will captivate you.

Published by Dosde this book shows every corner of the building and explains the structural innovations that Gaudí applied, fusing aesthetics with functionality.