Born in Barcelona in 1893, the painter Joan Miró experimented with various trends before coming into contact with Surrealism, the movement with which he reached artistic maturity.

Always concerned about developing alternative techniques to traditional painting, Miró constantly reinvented his style, creating new works until shortly before his death on the 25th of December, 1983, in Palma de Mallorca.

The avant-garde influence on Miró

Interested in drawing and illustration since childhood, Joan Miró could not satisfy his artistic vocation until 1912, when, after suffering from a nervous breakdown because of the dissatisfaction generated by his accountancy work, convinced his father that his personal wellbeing and future employment were intrinsically linked to the exclusive dedication to painting.

With parental approval, Miró, who was then nineteen years old, enrolled at the academy of Barcelonan painter Francesc Galí, where he was able to show off his creative potential and discover the latest artistic trends from Paris such as Fauvism and Cubism.

Such access to the vanguards ended up being decisive for the evolution of the young Miró, who even travelled to the French capital to further his knowledge and took advantage of the artistic possibilities offered by the new pictorial trends in order to provide himself with his own tools of expression, in an arduous, creative process characterised by constant reinvention.

Originated as an alternative to Dadaism, an artistic trend that was doomed to disintegration because of its destructive spirit, Surrealism revolutionised the Parisian cultural scene in the second decade of the twentieth century. The surrealist movement was led from its beginnings by the French poet André Breton, who, influenced by the psychoanalytic theories of Doctor Sigmund Freud, defended the validity of the world of dreams and irrational impulses.

According to Breton and his followers, artists had to act beyond the filters imposed by reason and by aesthetic and moral considerations, going directly to the subconscious in order to express their thoughts with complete freedom.

Always attentive to alternative intellectual trends, Miró did not hesitate to approach Surrealism, in a creative evolution that led him to completely redefine his own style and to begin a new pictorial stage dominated by the presence of dreamlike images and increasingly personal symbols.

In the mid-thirties, coinciding with the return of Joan Miró to his homeland, Spanish political life underwent a gradual process of deterioration that had dramatic consequences. Because of their antagonistic stance on fundamental issues such as the role of the Church in society and the ownership of means of production, the left-wing and right-wing forces became increasingly extremist, generating a situation of instability which, combined with a fragile economy, frustrated attempts to modernize the country.

The tension came to a head in July 1936, when the rebellion of a group of soldiers against the legitimate Government of the Republic sparked off a bloody civil war that lasted until 1939.

In this climate of tension, Miró, who was always obsessed with the idea of going beyond the traditional conception of painting, created some of his most expressive works, dominated by monstrous-looking figures that seemed to seek confrontation with the viewer.

The universe of the works of Miró

The outbreak of the Second World War in 1939 led to the disintegration of the European avant-garde scene, which until then had had its headquarters in the French capital. In Spain, where civil war gave way to a cruel dictatorship led by General Francisco Franco, the art world was also in a critical situation, constantly threatened by repression and censorship.

Paradoxically, in this inauspicious context for innovation, Joan Miró was able to lay the foundations of the style that would be key to providing him with international fame.

Isolated from the outside world and working tirelessly, the artist defined a very unique iconography that perfected many of the artistic findings developed in previous years. Thanks to this creative maturity, Joan Miró was able to seduce art critics and the public, whilst at the same time consolidating himself as one of the most interesting and ground-breaking artists of his generation, the creator of a universe that was as recognisable as it was inimitable.

The language of simplicity

For Joan Miró, the move to Palma de Mallorca in the second half of the fifties not only meant a change of scene, but also provided him with an opportunity to reflect on his artistic career.

During the move to the studio designed by his friend Josep Lluís Sert, the painter rediscovered the drawings and paintings that had been in storage since his early days and, after analysing all the material, felt the need to distance himself from his own past by giving a new direction to his work. This willingness to break away, enhanced by his close relationship with the American art scene and Oriental culture, became the driving force behind Miró’s activity in the sixties.

Without renouncing his usual iconography, the painter, who at that time was experiencing an upturn in his fame thanks to the holding of retrospectives in the main museums around the world, evolved towards a more direct style, which sought to achieve maximum effectiveness based on minimal plastic resources. 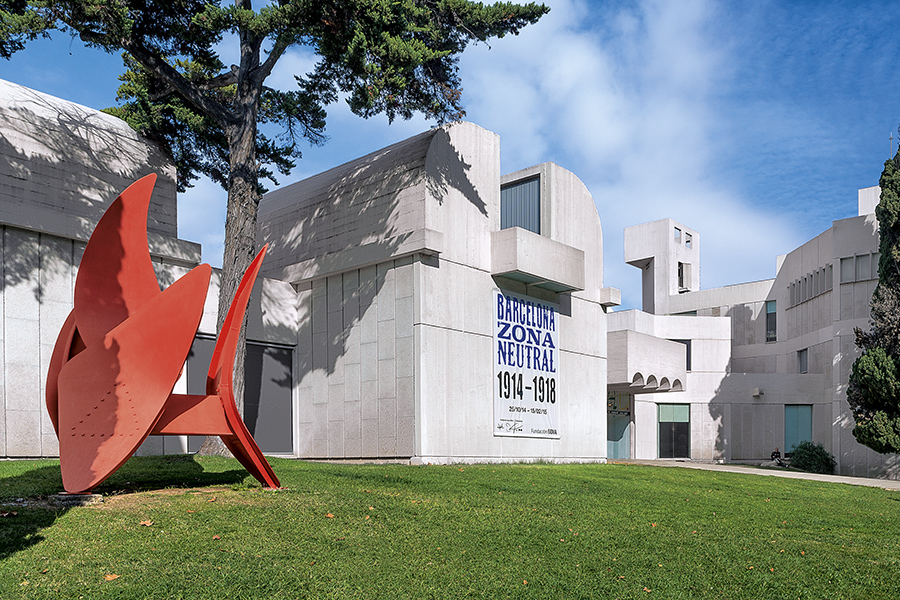 Admired for his creative freedom both abroad and in his homeland –where he had been ignored for decades by official bodies due to his opposition to Franco’s dictatorship–, during the last years of his life Joan Miró abstained from falling into self-complacency and continued working with different materials and techniques in order to broaden his artistic repertoire.

True to his independent character, the painter chose to shy away from the dictates of the market, without making concessions to the public and being guided solely by his instincts and intellectual concerns, which led him to focus his attention on the investigation of the nature of the creative process.

His interest in the mechanisms and the meaning of art was not only reflected in his works, always devised as a field of experimentation, but also in the implementation of separate foundations in Barcelona and Palma de Mallorca destined to become focal points for the dissemination of contemporary culture.

The book about Joan Miró’s most important works

This book on Joan Miró compiles the most important works of the painter, a major reference of contemporary art and the creator of one of the most fascinating artistic universes of the 20th century.