History of the Bodegas Güell

In 1874, industrialist Eusebi Güell acquires a large estate measuring 825 hectares to the south of Barcelona, on a very rocky coastal area between Sitges and Castelldefells, with the intention of channelling an underground spring towards the capital whilst cultivating some old vineyards and exploiting a limestone quarry. In 1882, Güell entrusted Gaudí–who he had known since 1878– with the project of a hunting lodge where he could invite his friends.

However, the architect’s idea, with similar features to Casa Vicens, Finca Güell and the Caprice, never got to be built. Thirteen years later, in 1895, Güell commissioned Gaudí with another project –wine cellars– in the same place, on this isolated settlement wedged between the sea and the Garraf massif. With the help of his colleague Francesc Berenguer, the architect designed a very original building, with a triangular shape and covered with a sharply sloping two-sided roof, similar to a tent.

This angular appearance and the use of stone from the adjoining quarry allow the property to blend into the rocky landscape, perfectly in tune with the arid location, just 200 metres from the beach and at the foot of the massif. The creation of the cement works, in 1916, spoilt part of the landscape and then twenty years later the phylloxera infestation devastated the vineyards which resulted in the end of the wine cellar’s activity, though the architectonic work still conserves its original beauty.

Wine cellars with abode and chapel 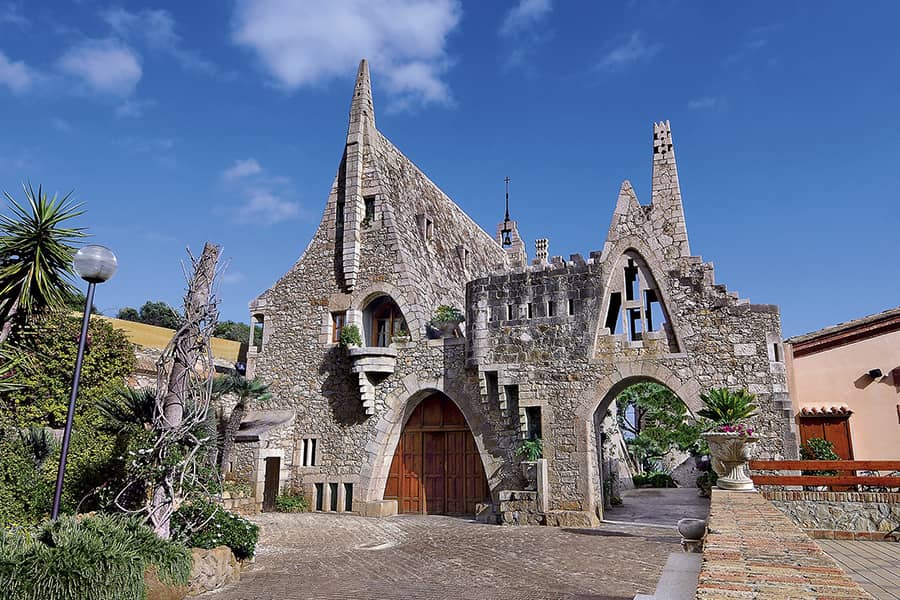 Güell commissioned Gaudí with a multi-functional building, where the family residence had to co-exist with lodgings for the hunting guests, the chapel and the wine cellars where the developer’s wine would mature. The businessman is constantly referred to in the biography of Gaudí, whom he comissioned with numerous projects that were named after him, such as Güell Palace or Park Güell.

The architect responded to the commission by designing a surprising distribution of five floors, where the two underground ones were to be used as wine cellars, whose only contact with the exterior was the vehicle entrance and two ventilation vents, so the wine could age untouched by natural light and be sheltered by thick walls.

The ground floor held the coach house and the servants’ quarters, with two staircases, an inside one and an outside one, which led to the first floor, designed as a family residence or guest accommodation for hunting time. The highest floor, the second storey, already very narrow due to the building’s shape, shelters the chapel, one of whose far ends looks out to sea by means of a loggia-style belvedere.

The exterior of the Bodegas Güell 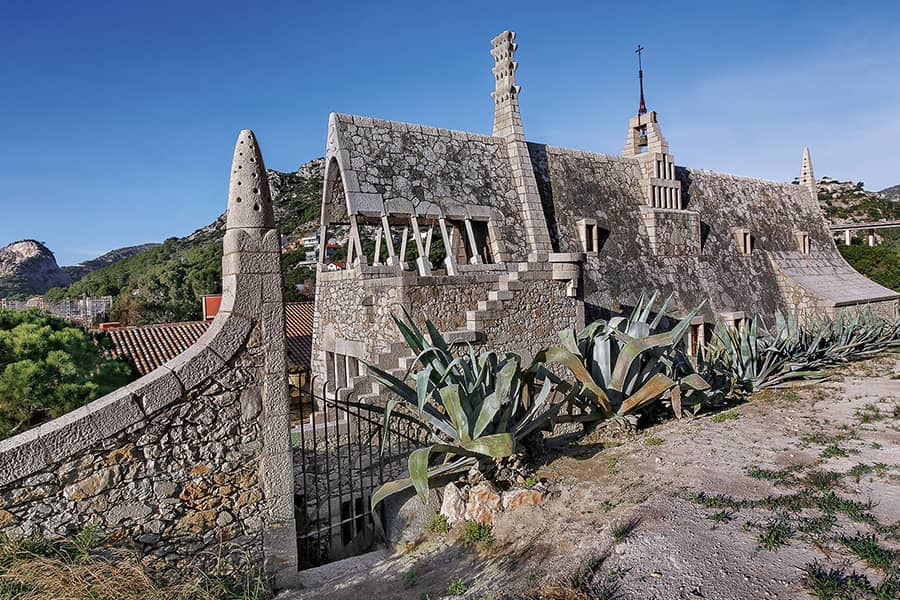 The arrangement takes up a rectangular shaped space whose surface reduces as it increases in height. Antoni Gaudí made the stone roof convert into a wall and cloaked the entire building with it until it reached actual ground level. Contrary to other projects, such as the Caprice, Park Guell or Casa Vicens, Antoni Gaudí opted for just one cladding material for all the building: grey limestone extracted from Garraf, which even covers the roof.

With this choice, the architect managed a total integration of the arrangement into the landscape, a mimesis that is underlined by the shapes of the building, as much the essential triangular prism as the added elements such as the bell tower, chimneys, the machicolation and the terraces.

The deluxe format of “Gaudí Complete work” edition means Antoni Gaudi’s works can be seen at their best thanks to 3D illustrations, excellent photographs and drawings.

Published by Dosde, the book includes the earlier, lesser known works of Gaudí to the works that he carried out as an established architect, and which have converted into a world reference in architecture.